Super Mad Champ is a motorcycle racing game with a dash of Road Rash, and then some. It’s a rather obscure game that I managed to acquire back in 2006 (the year I bought and originally wrote about many of these obscure Super Famicom imports). It’s not anything special but it does have a few features that are memorable and make it fun to dabble with here and there. 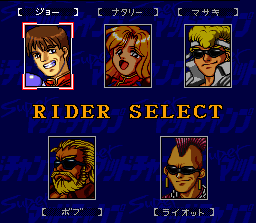 You get to pick from one of five thrill seekers. They’re a typical bunch but sometimes I wouldn’t have it any other way.

You earn more money with each race won as well as the number of opponents you knock off their bikes. You can use the money to buy a new bike (of which there are 12). You can tune them up as well. But don’t be fooled that this is some sort of sim-heavy racer. It’s an arcade-like racer through and through. 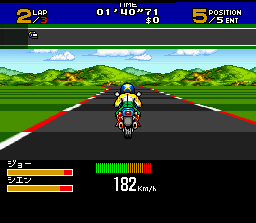 Total of 18 tracks. Unfortunately, it is one player only. 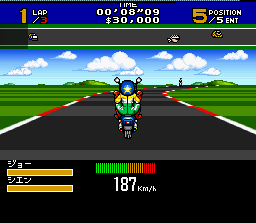 Press down to pop a wheelie. Try popping one right as you land after a big jump. If not, you’ll lose some momentum after landing. Every precious nanosecond counts! 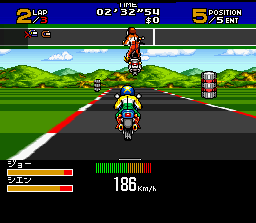 During take offs, the computer is smart to always pops a wheelie as to not lose momentum upon landing. 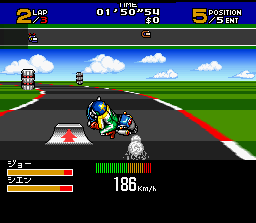 Sometimes there’s a dip in the road. Other times a platform lays in the way. React accordingly to these obstacles and hazards. 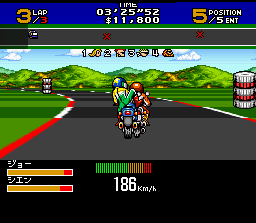 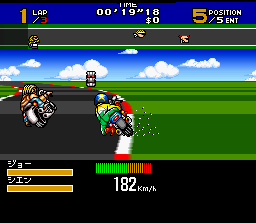 Scrolling is often what makes or breaks a game of this nature. In this case, I feared the worst coming from a smaller company, Givro (who developed the terrible Sega Genesis brawler Fighting Masters and most notably E.V.O.: The Search for Eden). I was therefore pleasantly surprised by how well Super Mad Champ scrolls. The lack of slowdown is a major plus as well. Not a bad job where many others have failed. The little details are pretty cool too, like the blades of grass that kick up when you powerslide on them.

Track variety is another important component of what makes a quality racing game, and Super Mad Champ has their bases fairly covered. There’s a decent amount of variety as you can see.

SAVING THE BEST FOR LAST

Up to this point you might be thinking “OK, it’s got some Road Rash I’ll grant you that. But I don’t see anything worth writing home about.” And my response… well, let me just show you some key pictures… 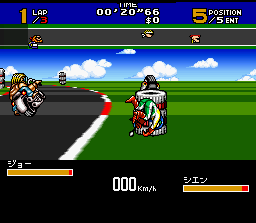 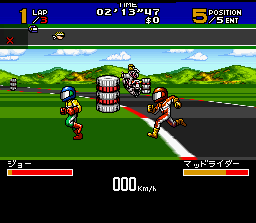 Whenever you get off your bike, whether by choice or force, this guy appears ready to fight. Both players have an energy bar and can block. It’s no Street Fighter II of course but it’s a fun novelty. You can only punch and jump kick, but this basic style works for this sort of game. Wait, actually, there is one more move you can do…

Yup, you can even steal the opposition’s motorcycle. Brilliant. 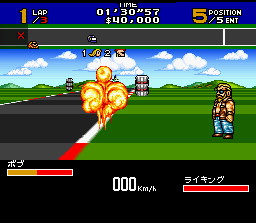 Few things are better than throwing bikes around. Just keep in mind that they too have an energy bar. The lower a motorcycle’s energy, the less velocity it can travel at. And should its health ever reach zero, well, KABOOM! 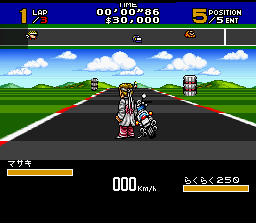 Looking for an easy way to upgrade your ride? Here’s my simple hijacking guide. Step 1: Come to a full stop, get off and wait. 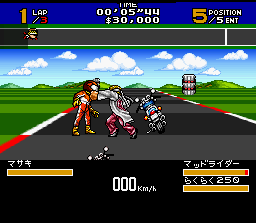 Step 2: Give the next rider a good fist sandwich and then say hello to your new ride. Bada bing, bada boom.

Timed right, you can even knock off passing riders.

No fancy Hadoken motions here. Those moves above merely cap off punch combos (rapidly pressing Y). When you’re off your bike you have two options: fight or flight. You have to weigh your pros and cons. Fight too long and you’ll never get back in the race. If you don’t finish #1 or #2 (out of 5) you have to repeat the course. So it’s advisable to fight temptation. But should you engage in the occasional scuffle, make it quick and go. But if you just want to fool around? It’s fun to finish ‘em off.

The only other piece of info on the web I could find on this game (back in late 2006) states the following:

For those who are fans of the Kunio-kun series like I am, might be aware that at some point Technos planned on releasing Kunio Bike Racing game using the same engine from Kunio-tachi no Banka. What few people may know however, was that Kunio-tachi no Banka was actually developed by outside company called Almanic. Almanic was comprised of former Technos staff members, including Kunio-kun and Double Dragon director and producer, Yoshihisa Kishimoto. Almanic did a bunch of other stuff, but their best known work was Wonder Project J and its N64 sequel.

Anyway, Almanic was contracted by Technos to do Kunio-tachi no Banka (the true sequel to the very first Kunio-kun game), in addition to the bike racing game. While Technos ditched the bike racing, Almanic decided to released it anyway through another company and thus, it became Super Mad Champ (without Kunio’s presence in the game). 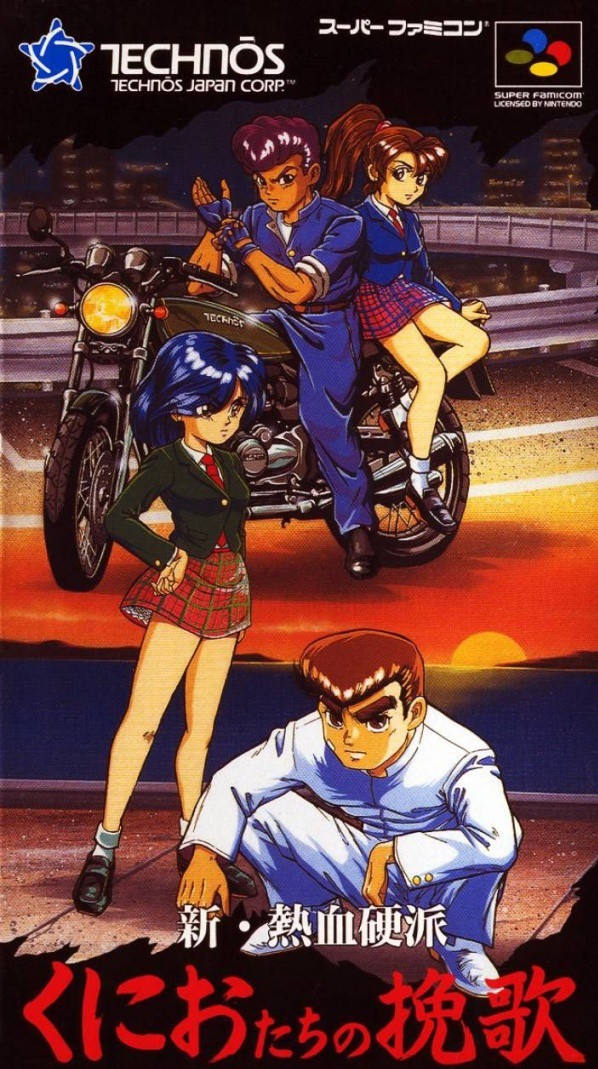 Mad Champ, as mentioned earlier, was developed on the Kunio-tachi no Banka-engine, meaning that both games, share a similar look. As a matter of fact, you can even get off your bike and fight against a rival biker (and steal his bike while you’re at it). The rest of the game plays like a typical bike racing simulator, in which you race in three different types of grand prix and customize your bike (and buy a new one when you can). It’s quite a fun little game. 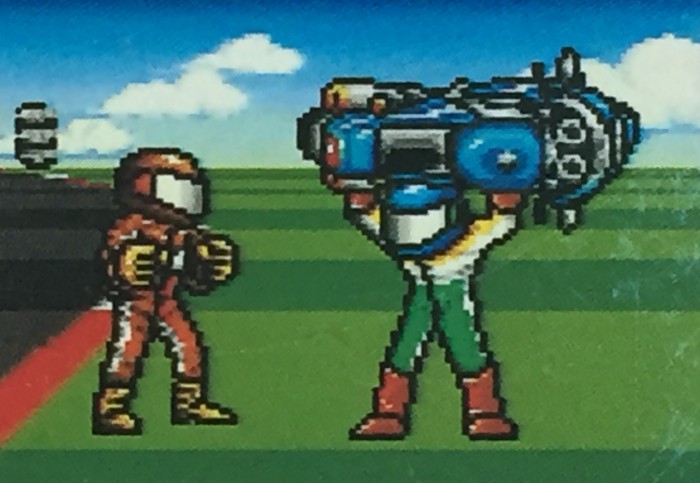 Super Mad Champ (gotta love its campy title) was one of those obscure oddities I couldn’t wait to play back in 2006. I wondered if it was obscure because it was so bad or if maybe it was some sort of hidden gem. Turns out it’s neither but somewhere in the middle. The racing, being the meat of the game, is solid enough and the extracurricular activities make it that much more fun and memorable. It’s not going to light your world on fire but when you’re in the mood for an arcade-like racer on your SNES with a little silliness and black humor thrown in the mix, Super Mad Champ gets the job done. All in all, a fun little quirky racing game it is.