Today marks 20 years since the unfortunate and untimely passing of one of horror’s most prolific writers, Richard Laymon. On February 14, 2001, Mr. Laymon sadly left this world far too soon, dying at the tender age of 54. To honor his amazing legacy and life, I can’t think of a better time than now to share some memories and highlights. So whether you’re brand new to Laymon’s lunacy or a long time fan, sit back and grab a cold one. This one’s for you, Uncle Dicky! 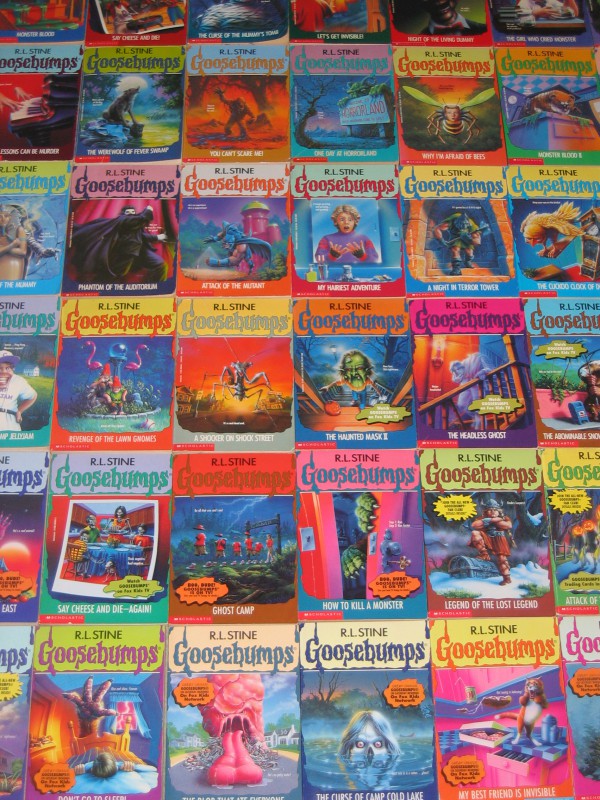 Ever since the ripe age of 6 — when I first experienced John Carpenter’s masterpiece, Halloween — I have been a huge fan of horror. Naturally, that love carried into the mid ’90s with R.L. Stine’s classic Goosebumps books. 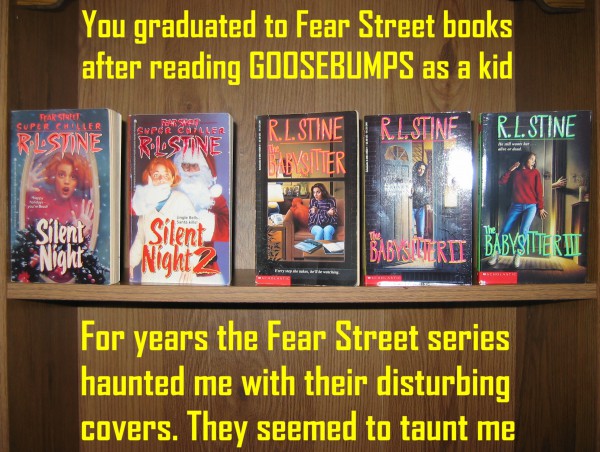 Following Goosebumps, the next logical evolution was Fear Street. R.L. Stine wrote this series for a teenage audience. I had a blast reading these books, especially The Babysitter and its sequels. Fond memories of reading Hit and Run in one sitting late one summer night in 1995. 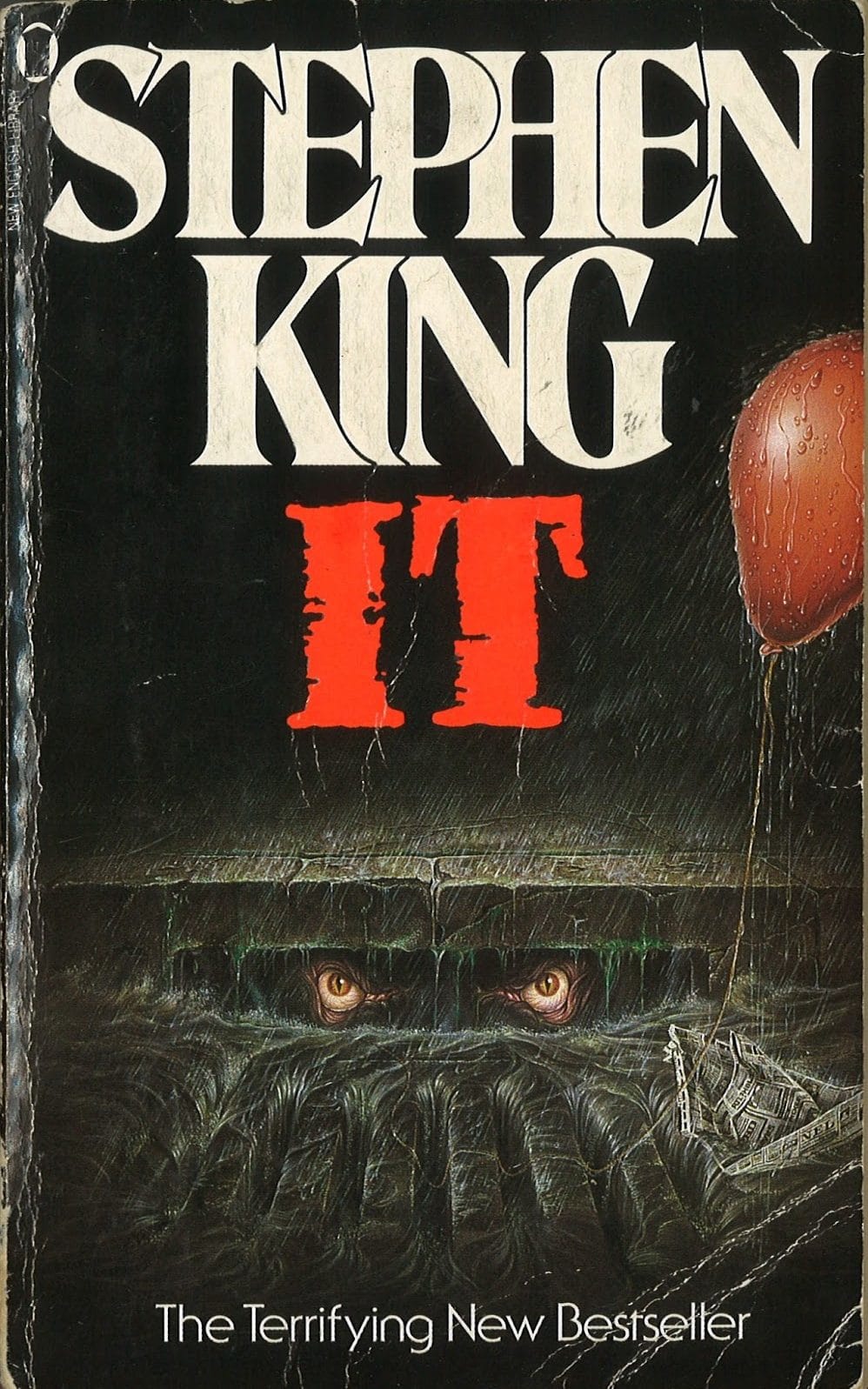 Given my history with horror, one might assume the next step to be venturing out with adult horror books, such as Stephen King’s It. Except I didn’t. By the time I hit high school in the fall of 1997, I stopped reading for leisure and only read to fulfill class assignments and essays. Reading — something I once loved dearly — became strictly perfunctory. 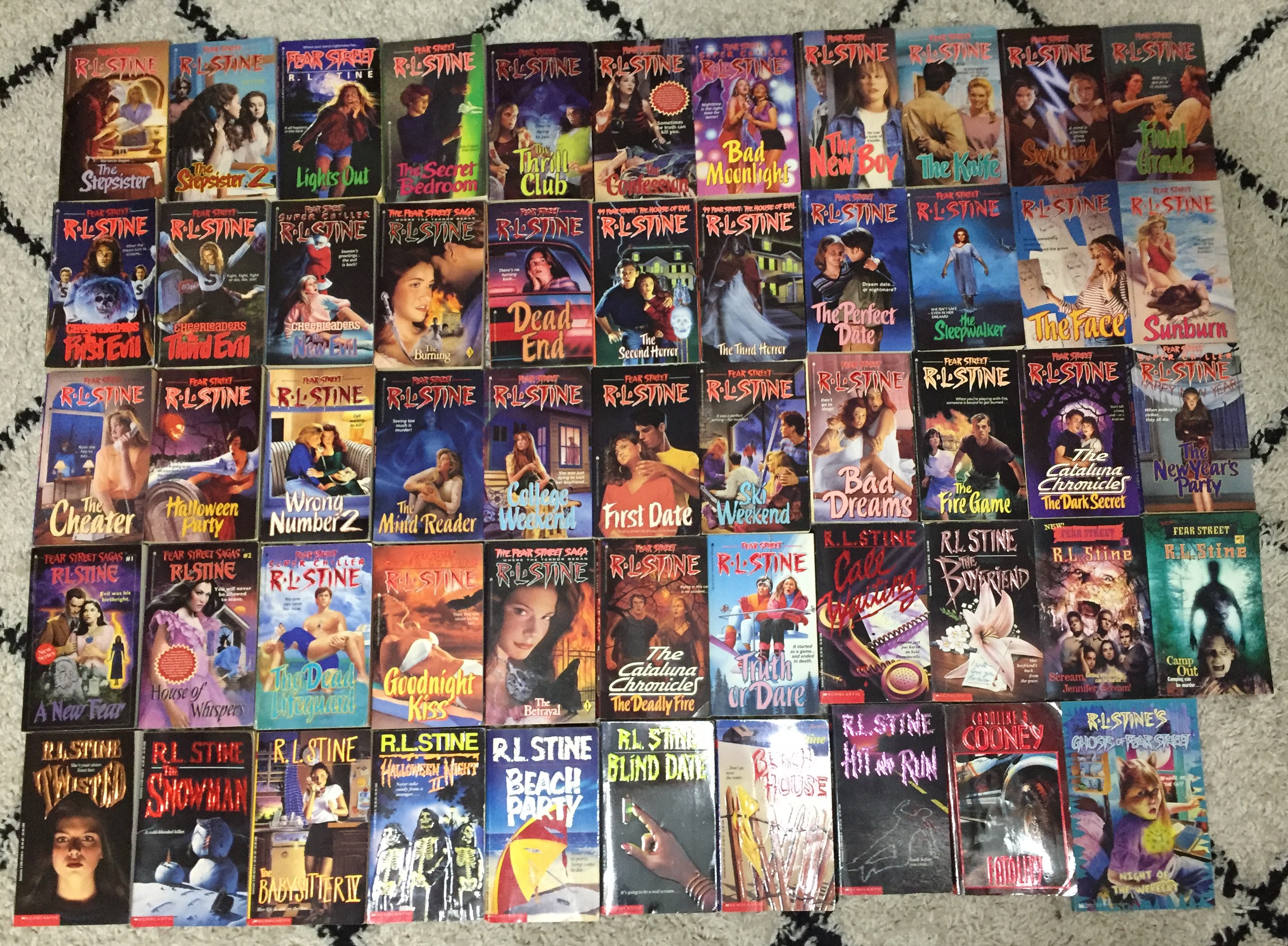 Fast forward over 20 years to April of 2019. Randomly visiting a Goodwill by my girlfriend’s place 2 hours out of town, I hit the mother lode. Displayed enticingly before me on the shelf were over 50 R.L. Stine horror books. And just like that, I was back in. 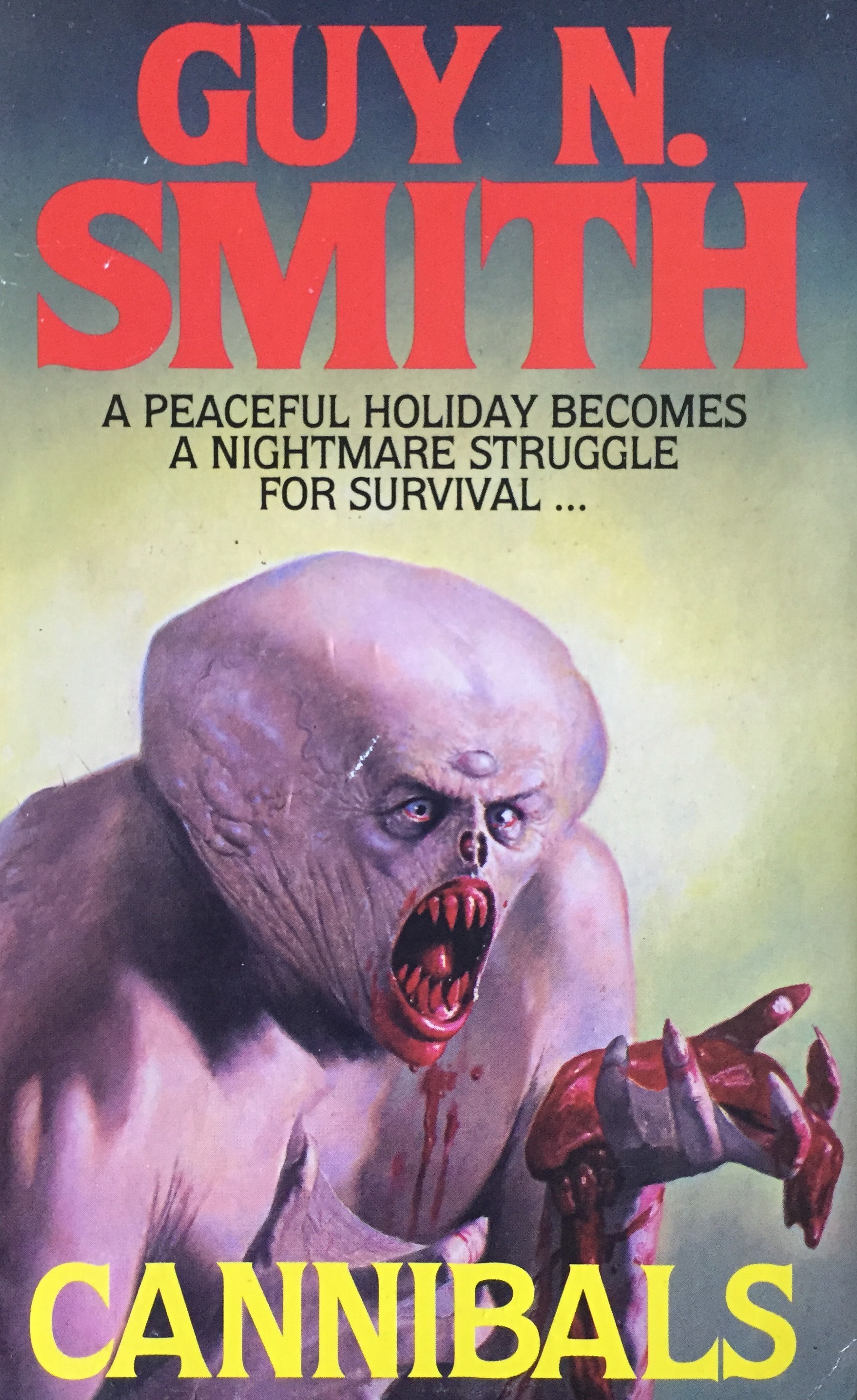 2 short months later, in the summer of 2019, I did a random search for horror books on eBay. Came across CANNIBALS by Guy N. Smith. Up to this point in my life, I had yet to read an adult horror novel. I knew right away that Cannibals had to be the one to pop my cherry. It was, and it was glorious. 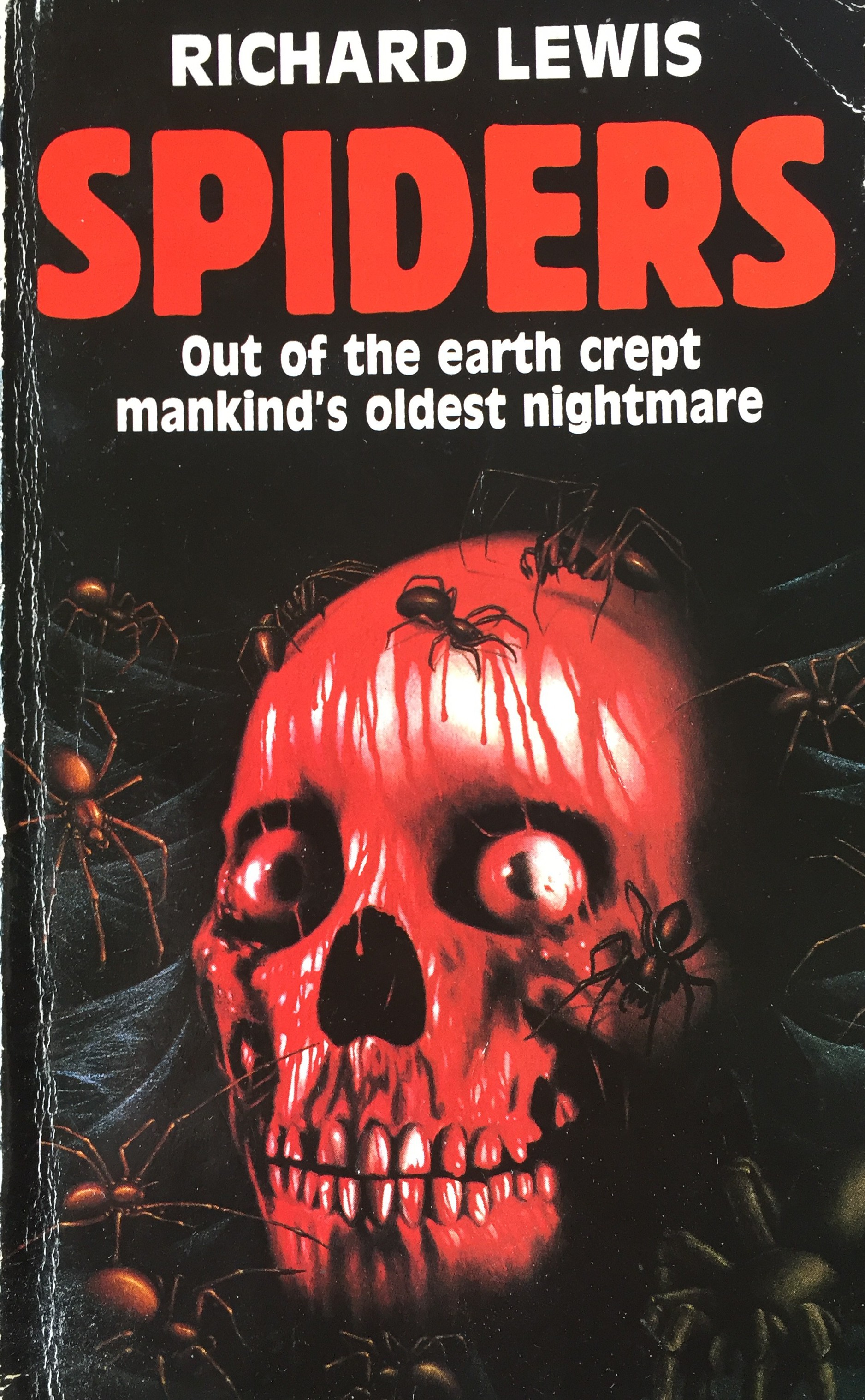 Suddenly, the floodgates opened. The summer of 2019 began my obsession with buying and reading as many vintage horror paperbacks as I could. Books like SPIDERS by Richard Lewis spooked the shit out of me, and I couldn’t get enough. 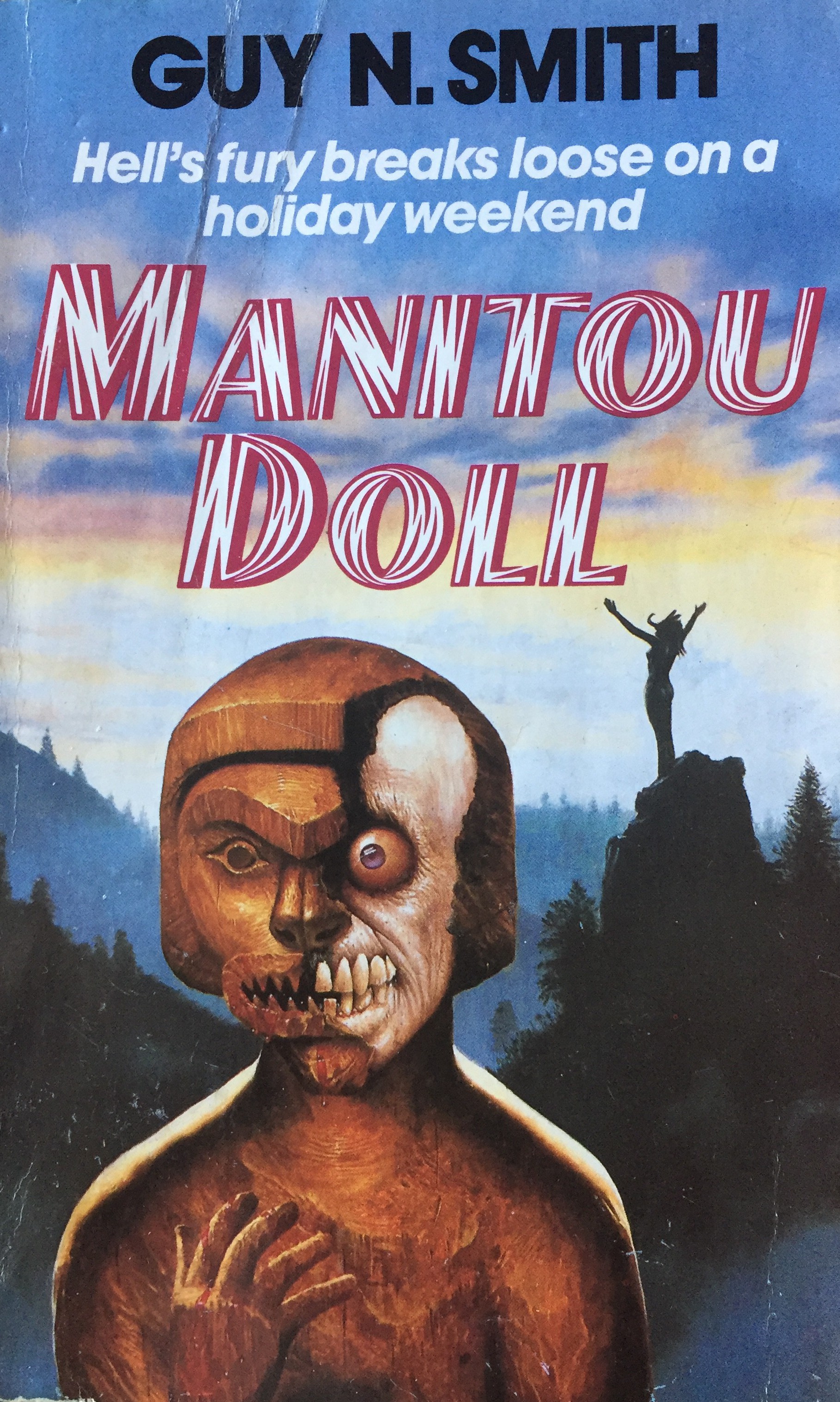 Sure, there were some disappointments along the way, such as Guy N. Smith’s MANITOU DOLL. But I loved the fantastic art of these (cheesy) vintage horror paperbacks from hell, and I loved hunting for the next great creepy read. 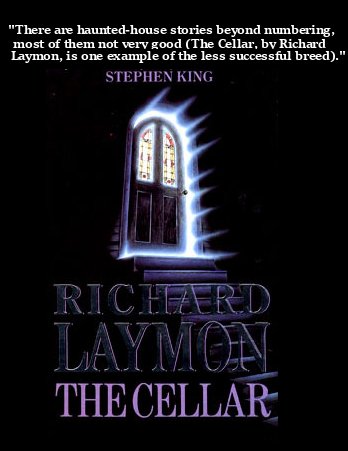 Enter Richard Laymon. In July of 2019, I was browsing the horror aisle at a mom and pop book shop and came across THE CELLAR. I had been reading online and the name “Richard Laymon” had crossed my desk more times than once. I picked it up, recalling that the word on the street was that Richard Laymon isn’t for the faint of heart. And boy, were they not kidding. 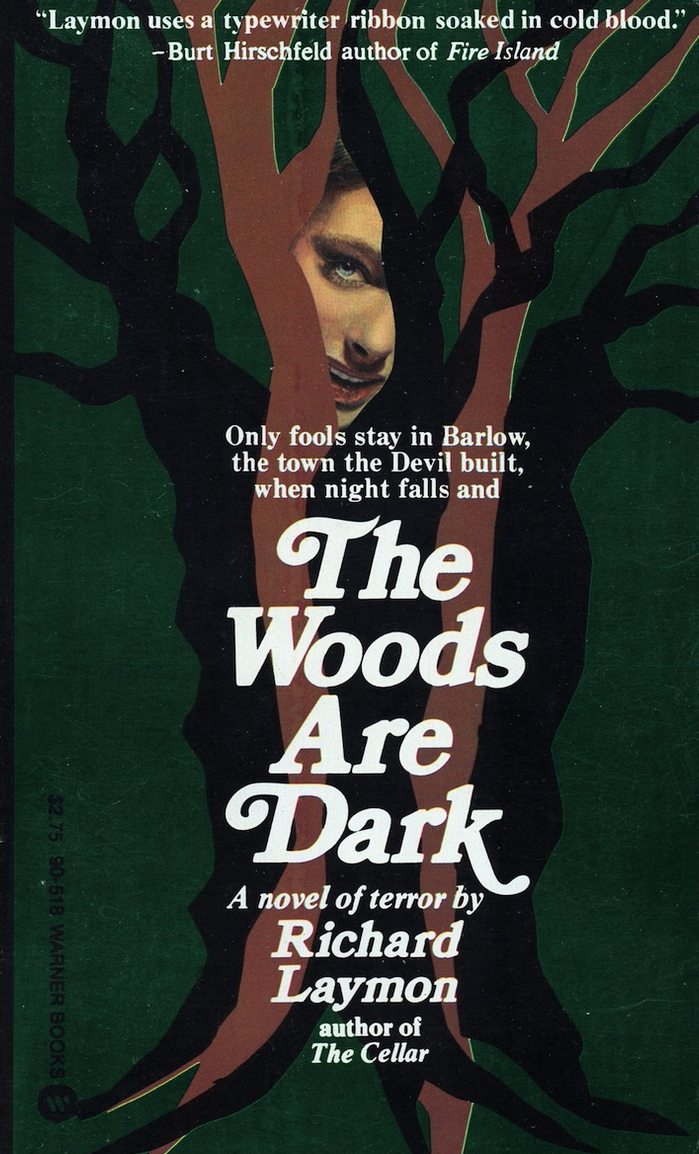 A week or so later, I won a lot of Richard Laymon books off eBay. One of the books was The Woods Are Dark. It was the first Laymon book I read. It was graphic, insane and read like a trashy 1980s slasher movie. Admittedly, it wasn’t the greatest book I’ve ever read, but it certainly left an impression. 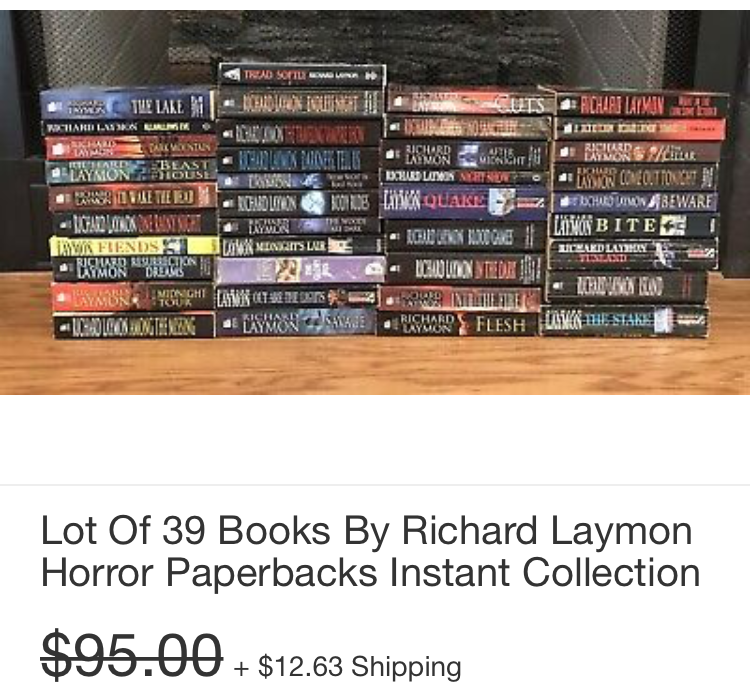 In September of 2019, I struck gold when I won a massive lot of 39 Richard Laymon novels. As the auction title suggested, it was an “instant collection.” I remember making an $87 offer, so with shipping it would be just under $100. The seller was nice enough to accept, and I won the whole shebang for $99.63 (this was right before eBay started taxing winning bidders). $2.55 a pop? Sign me up! 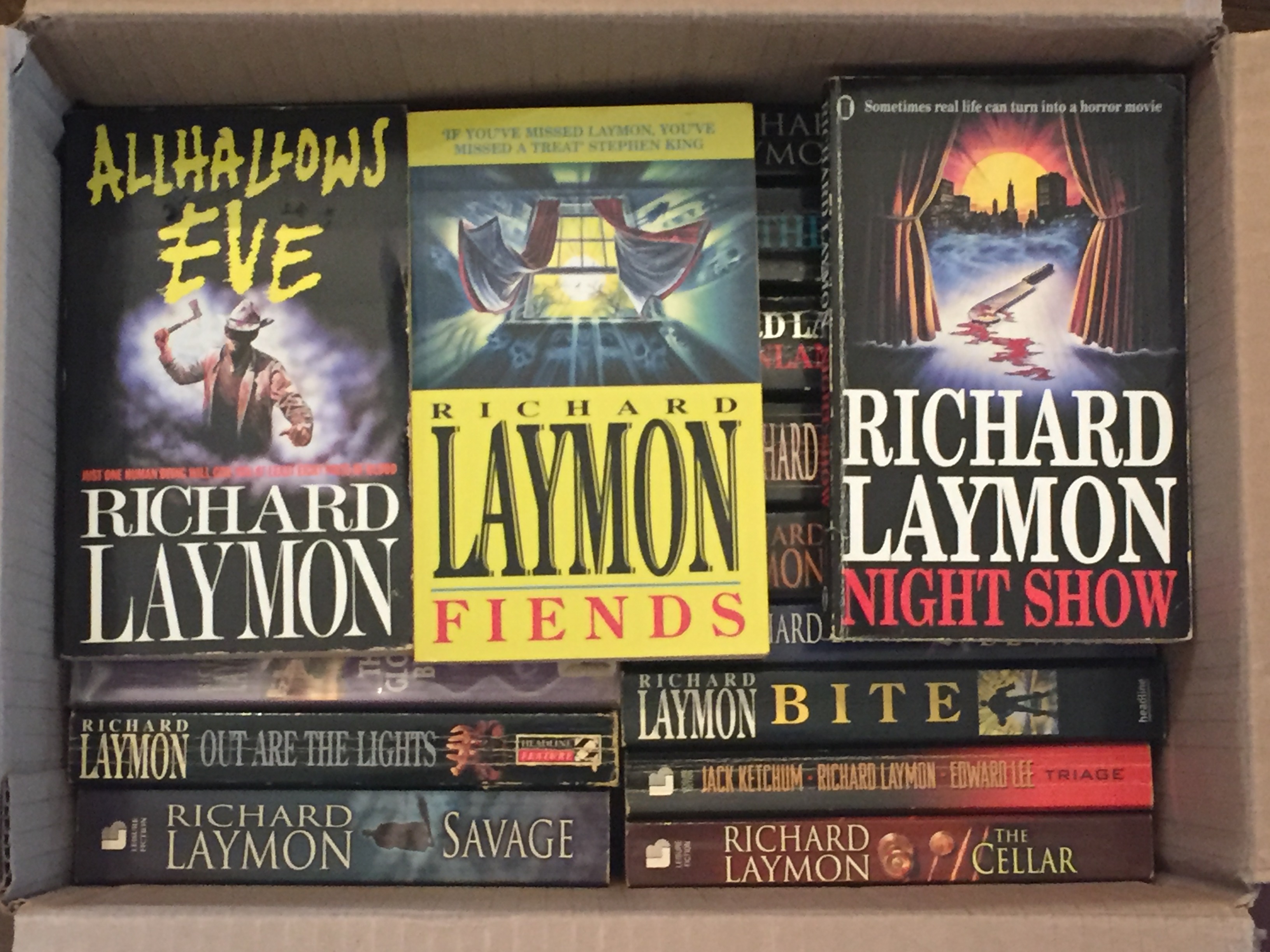 I remember the day the package came. My heart raced a bit faster when I got home from work and saw that big brown box sitting gloriously on the porch. Opening it felt like Christmas morning! There were so many books that the seller organized them in two layers. Here’s the top… 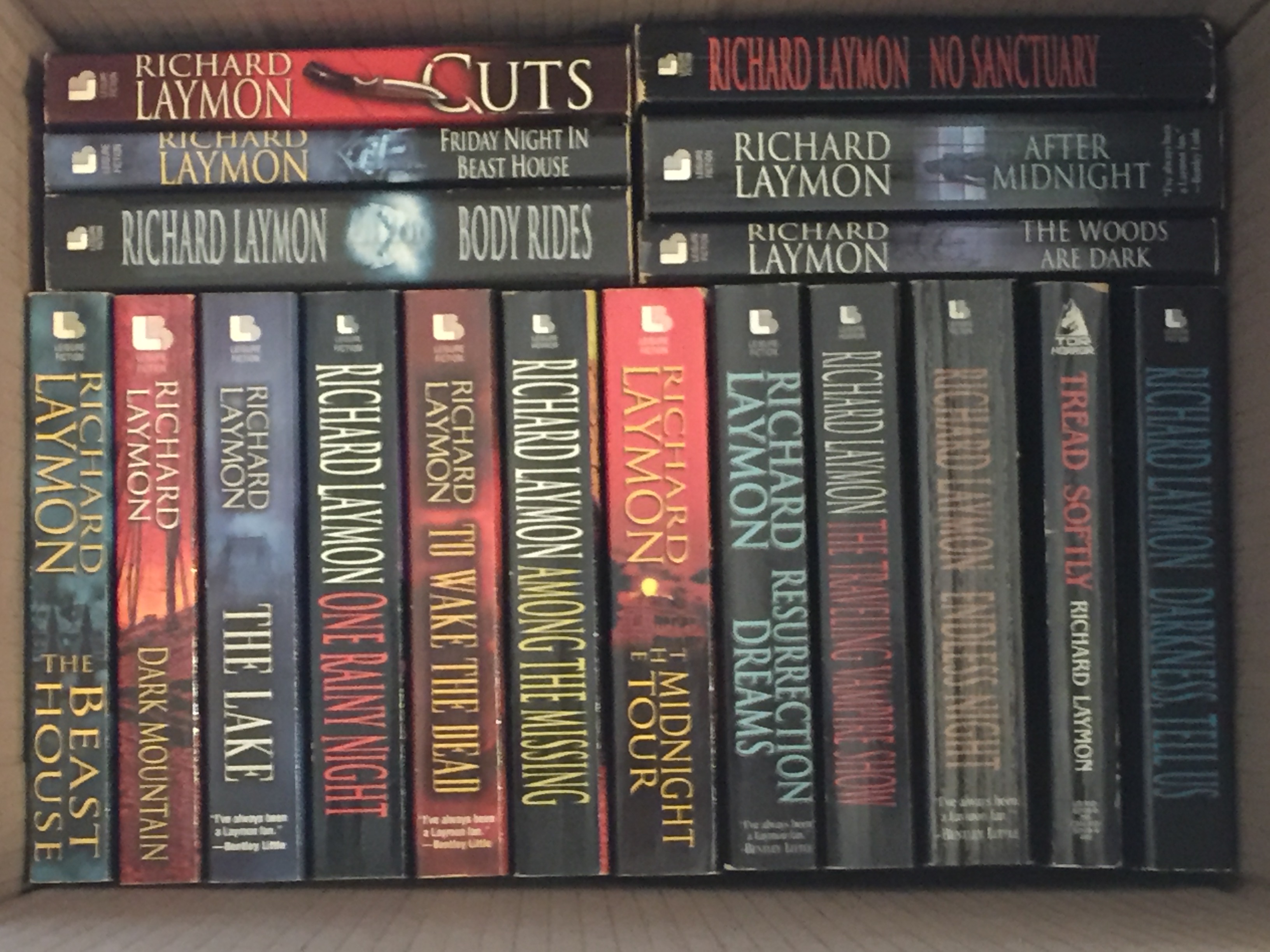 And here’s the bottom. The rest of that year I started devouring Richard Laymon novels like crazy. One a month, sometimes two. Although many of his books are over 400 pages, because of the plentiful dialogue and the crazy plot points that move briskly, those pages (often times) fly by rather fast! 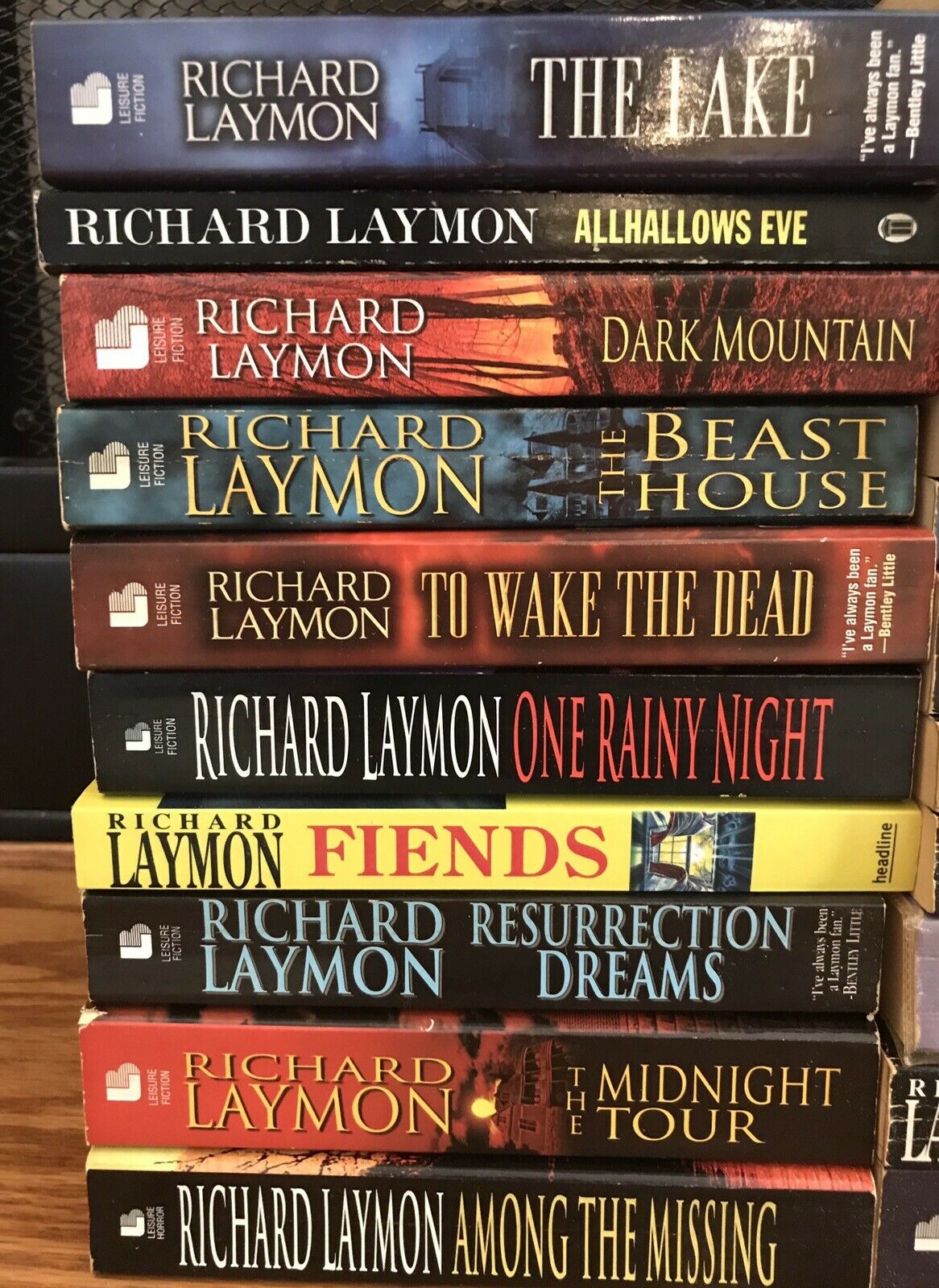 From that picture I’ve read One Rainy Night, To Wake the Dead, and The Beast House (sequel to The Cellar — the first Laymon book I bought). Of those 3, I enjoyed To Wake the Dead the most — it’s a creepy story about an ancient mummy that comes back to life and wrecks havoc on an unsuspecting community! Throw in a ludicrous sub-plot about the (really) dark side of human beings and you have a truly horrific and harrowing read! 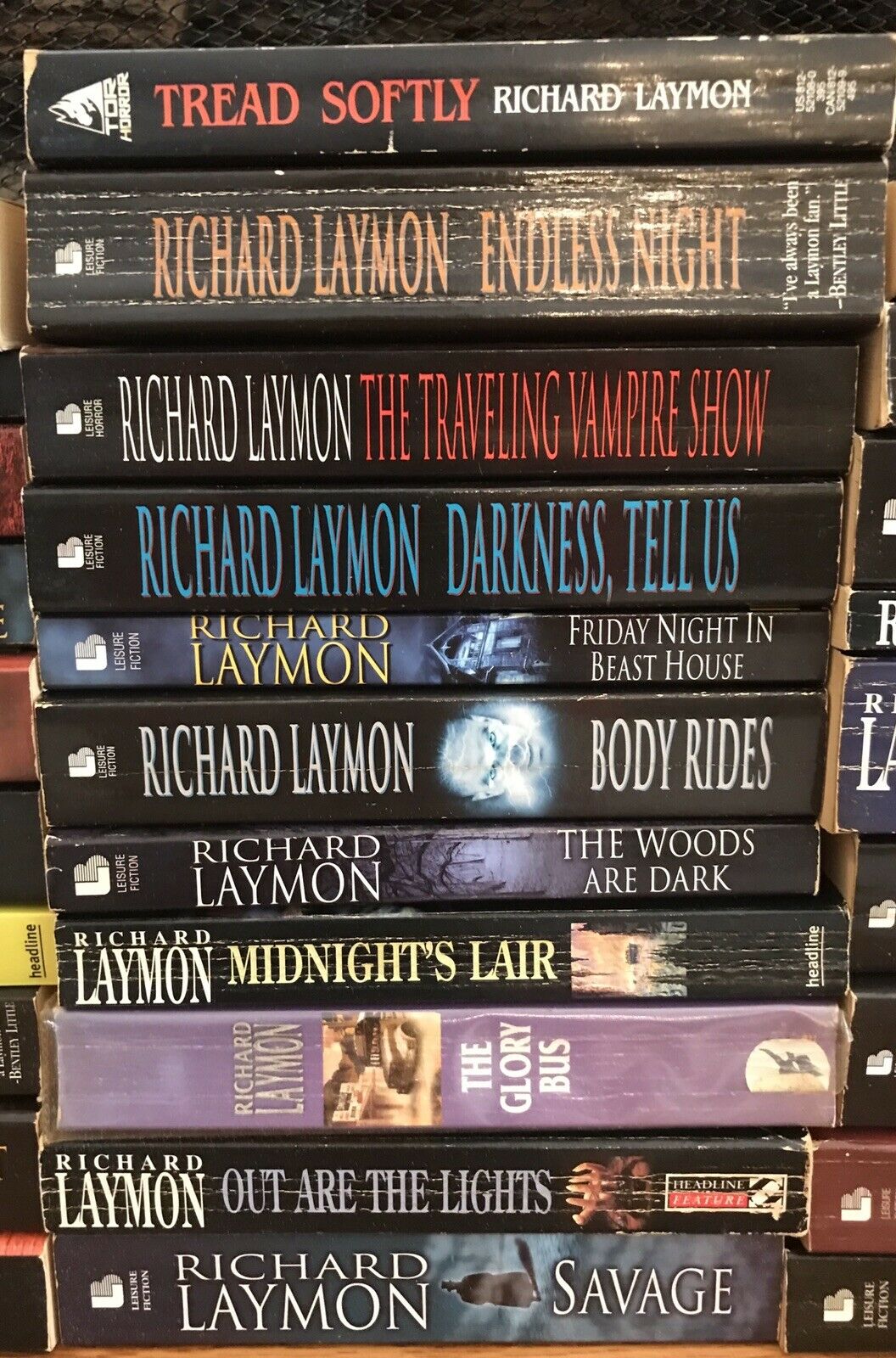 From this pile I’ve read Out Are the Lights, The Woods Are Dark (the version in the picture above is the unedited edition), Endless Night and The Traveling Vampire Show. My wife and I are currently reading Darkness, Tell Us. That one involves a Ouija board and some college kids. As you can expect, much mayhem ensues. The Traveling Vampire Show is a coming-of-age novel that’s often lauded by many horror fans. I was actually somewhat disappointed in TVS. I thought it would be a lot more epic but it ended up being a bit uneven. 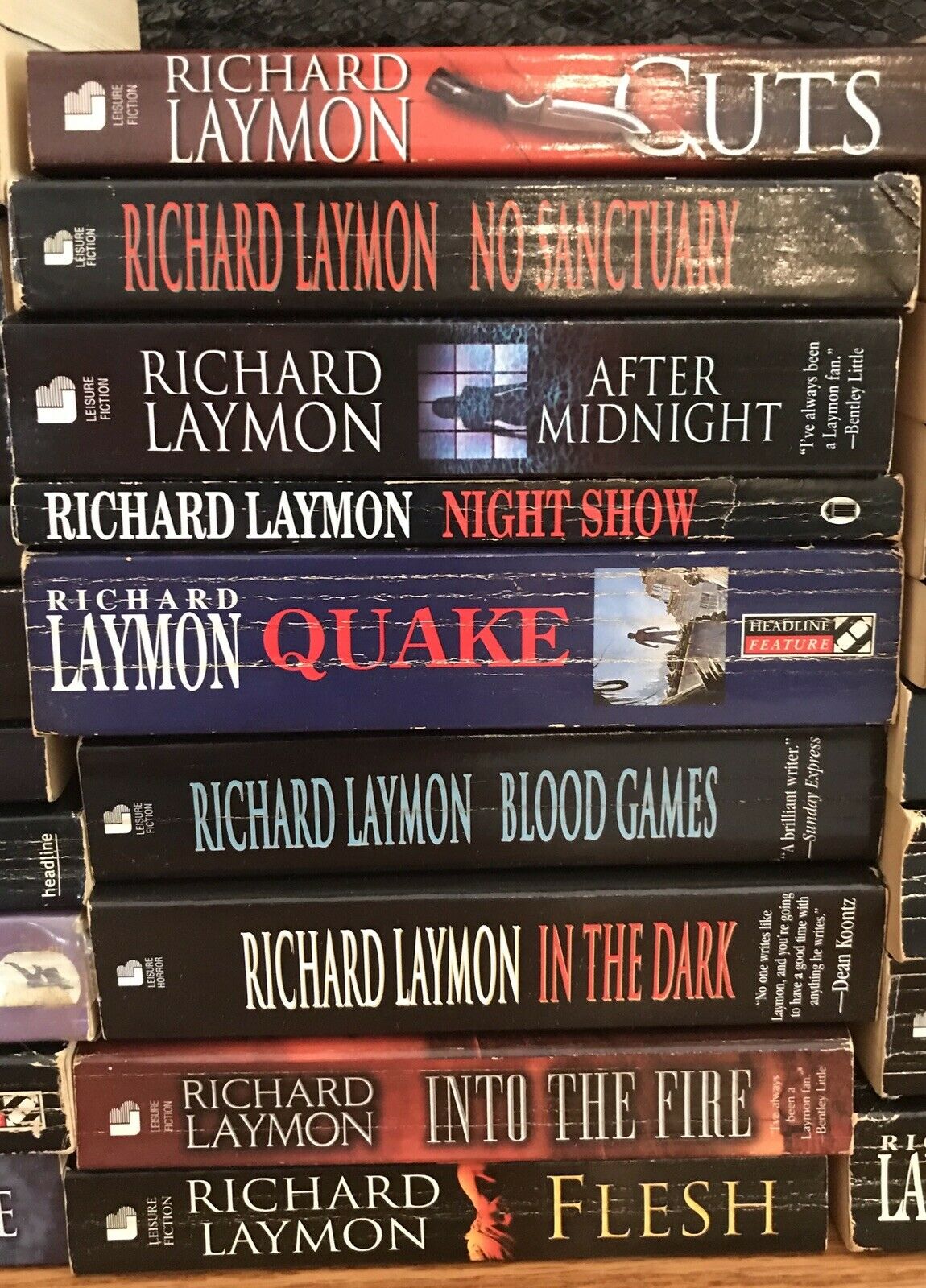 I’ve read In the Dark, Night Show, and After Midnight. In the Dark is easily my favorite of this pile. It’s about a quiet librarian who one evening discovers a note offering her some cash in exchange for completing a simple task. As one might guess, the tasks get increasingly more complex and dangerous as the cash offerings go up. Not to mention… is the “Game Master” even human at all… or is it some kind of monstrous demon? It is a very unsettling read at times. Laymon, at his best, paints these horrific and vivid images in your brain that you’ll NEVER forget. 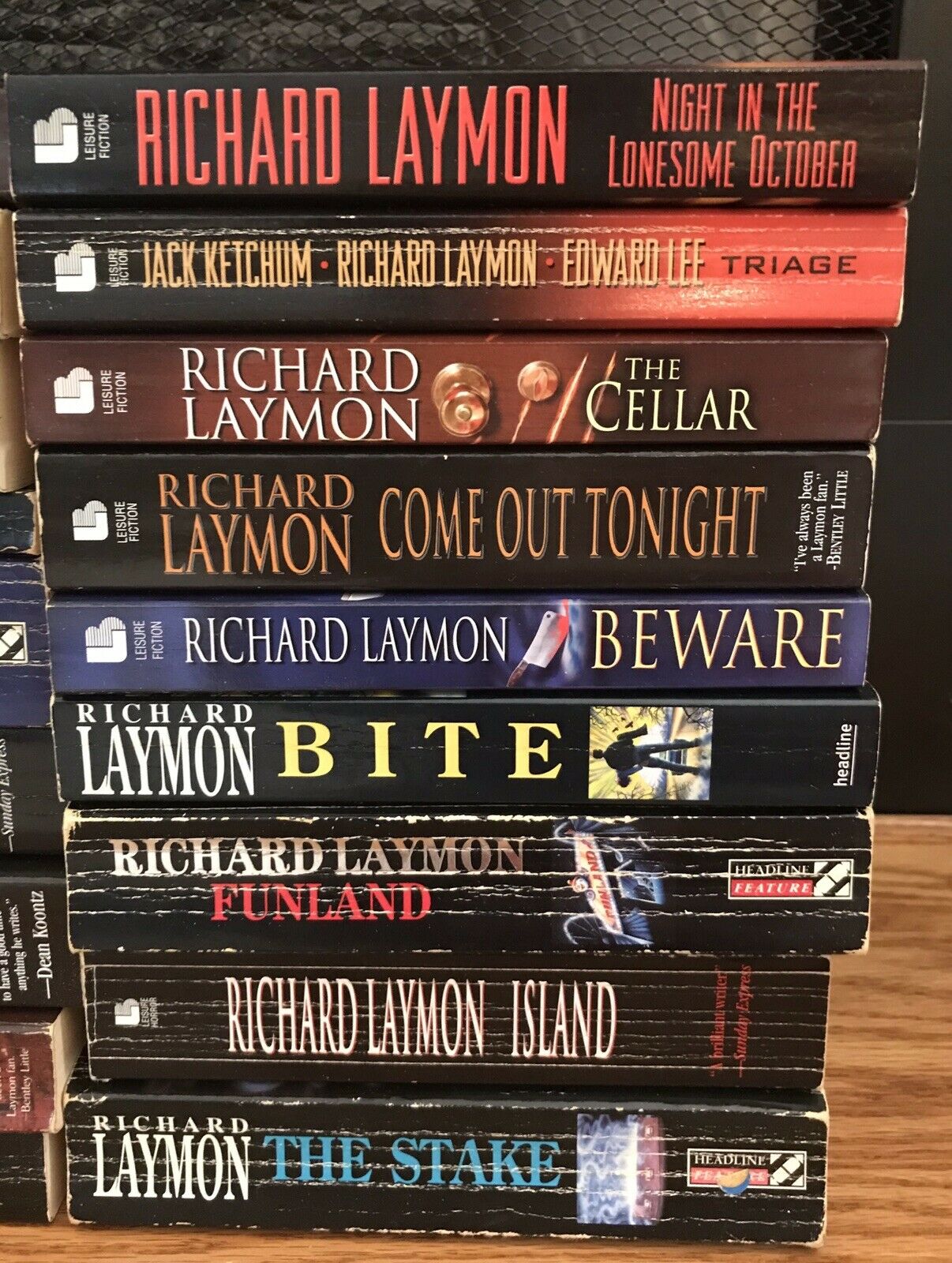 The last pile I’ve read Island, Funland, Bite, Come Out Tonight, The Cellar and Night in the Lonesome October. NitLO is hands down my favorite horror book of all time. I don’t think anything will ever top that, or even come close. You can read my review for more. One of the most atmospheric and addicting books I’ve ever read. Funland takes place in a beach town and involves a corrupt amusement park. “The Trolls” are running roughshod and people are disappearing after dark. A local gang of teenagers decide to take matters into their own hands and do some investigating. But has this group of vigilantes bitten off more than they can chew? The climax is all sorts of trippy and insane. A lot of people love Funland but it had some pacing issues for me. Still, definitely a fun Laymon entry. Also notable for being the first 500+ page book I ever read!

But my favorite book in that pile, and my second overall favorite Laymon novel thus far, is COME OUT TONIGHT. This book is just a notch below Night in the Lonesome October for me. It captured the seedy streets of Los Angeles perfectly. Check out this bat shit crazy plot: it’s one of LA’s most scorching summer nights. Duane and Sherry are about to get it on, but there’s no condom. So Duane goes down to the local 7-11 and never returns. Sherry, sensing that something terrible has happened, ventures out into the muggy and sweltering LA night… what she finds will change her life forever. Very underrated and reads just like a movie. You can almost see every single scene unfolding in your head and it’s just magic when a writer can do that!

BTW, Island is my wife’s favorite. I enjoyed that one, too. It’s brutal, and if it wasn’t made clear to you yet, just know that Laymon isn’t for everyone. There are a lot of potential trigger warnings. Rape and a heavy focus on women’s breasts are pretty much in all his novels. Every book of his has the word “rump” in it many times over. He had a very distinct writer’s voice, and you can tell a Laymon book almost right away. No one wrote like how he did.

Although the horror world lost Richard Laymon all too awfully soon, his legacy lives on with his 40+ published books. So far I’ve read about 20 of them, with my top 3 favorites being Night in the Lonesome October, Come Out Tonight and In the Dark. Don’t get me wrong, he’s had his fair share of 2 star duds. Bite was a sack of shit and Out Are the Lights was a bad day at the office for ol’ Uncle Dicky. But for the most part, his books are entertaining and wild. If you have any interest in horror at all, I recommend reading a few of his works before all is said and done. I especially recommend Night in the Lonesome October. That one MUST be read exclusively at night. I often wish I could go back and read that one for the first time again.

It’s been 20 years now since Richard Laymon’s passing. And yet the horror community still raves about his work and he is often recommended in horror book recommendation topics. It’s not hard to see why. I’m sad knowing I’ve already gone through half his catalog. I will certainly savor the last 20 or so Laymon books I have yet to read over the next 10-15 years. I hope this article inspires you to pick up a Laymon book in the near future. Happy reading!