Based upon the 1992 summer blockbuster of the same name, Batman makes his SNES debut in memorable fashion. Batman was a hot commodity in the early ’90s so it was only a matter of time before the dark knight, under the proud banner of Konami, would soon descend upon the SNES. Konami boasted an impressive track record with smash hits such as Axelay, Contra III: The Alien Wars, Gradius III, Legend of the Mystical Ninja, Super Castlevania IV and Teenage Mutant Ninja Turtles IV: Turtles in Time. Therefore Batman Returns was in good hands, and poised to be Konami’s next epic SNES classic. Right? But first… 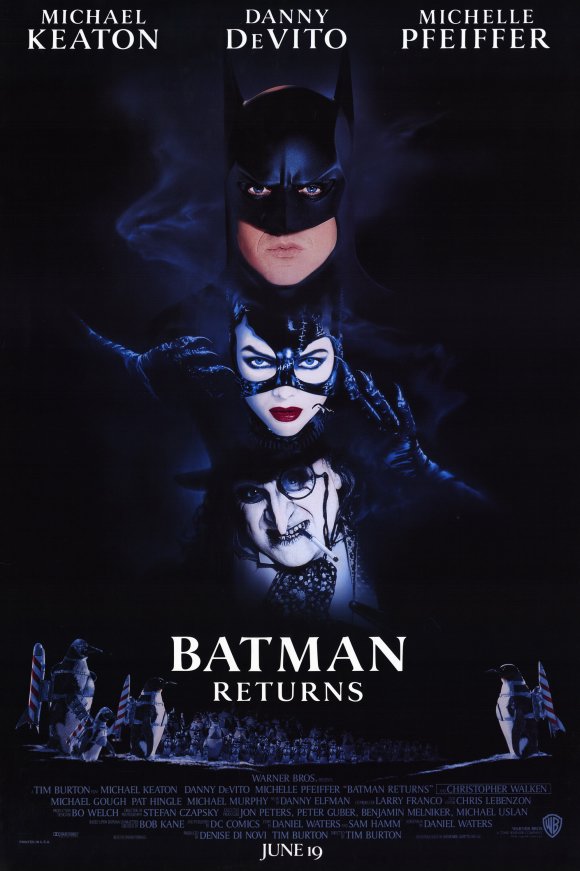 Tim Burton’s Batman Returns was made on a budget of 80 million and grossed a whopping 267 million worldwide. It garnered the 3rd highest gross for movies in North America in 1992 at 162.8 million. #2 was Home Alone 2: Lost in New York at 173.5 million and the kingpin that year was Aladdin, which grossed a staggering 217.3 million. In terms of worldwide dominance, Batman Returns ranked 6th overall in 1992.

Being a proven property and coming off a massive hit, it was inevitable that video game adaptations would soon follow. Back in 1992, two mega titans were battling it out for 16-bit supremacy: the Sega Genesis and the Super Nintendo. Malibu developed the Genesis game while Konami handled the Super Nintendo end. Both games were quite different, and consensus says that SNES owners won out with the (far) superior version. But of course, your mileage may vary. 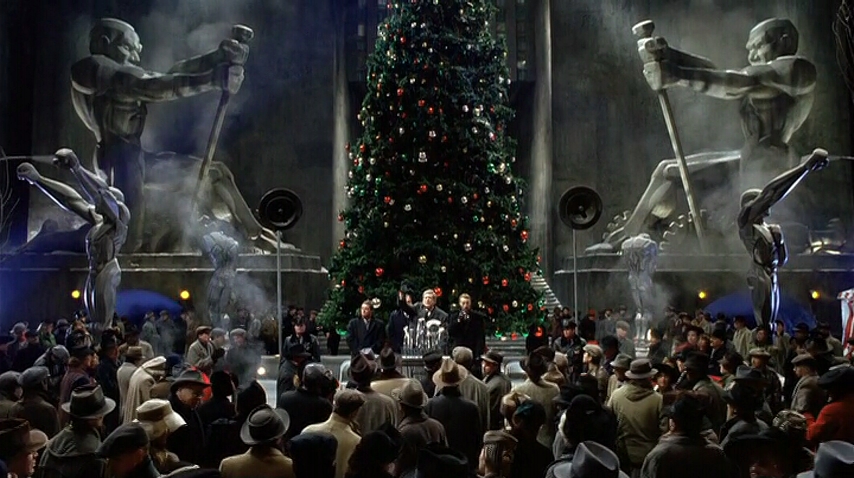 It’s fitting that I’m writing this late on Christmas evening. I just spent the bulk of the day hanging out with family and playing games on the Switch with my cousin, David. We enjoyed bouts of Mario Kart 8 Deluxe, Super Smash Bros. Ultimate and Shock Troopers. Anyway, I say fitting because Batman Returns has a very festive atmosphere. Well, at least as festive as Gotham City can get. The SNES game follows suit and is quite faithful to its source material. Playing Batman Returns this time of the year is very fitting, indeed. What a shame, then, that it’s only 1-player. But I suppose it wouldn’t make sense to throw Robin in there since he wasn’t in the 1992 film. 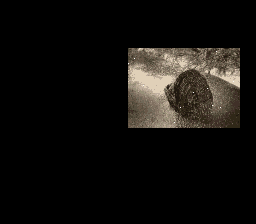 Horrified by the disfigurement of their son, Oswald Cobblepot’s parents tossed Oswald and his carriage into the Gotham River. 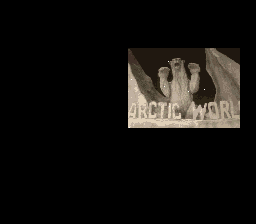 The carriage floated down the storm drain and ended up in Arctic World, part of the old Gotham Zoo. There he was rescued by four Emperor penguins, and they quickly forged a bond… 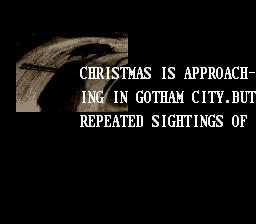 The denizens of Gotham City have reported spotting a strange looking man prowling around. Almost more like a creature of the night… 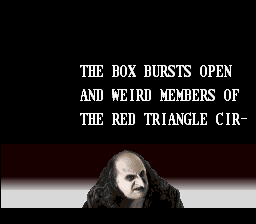 It is, of course, none other than Oswald Cobblepot. Now known as The Penguin, he wishes to rule Gotham’s criminal underworld. 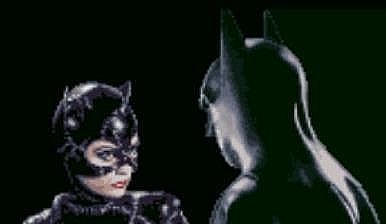 Selina Kyle was once a quiet secretary working under the thumb of Max Shreck, a very powerful businessman. That was before she transformed into the Catwoman! 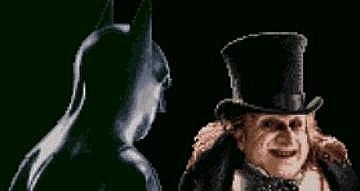 The Penguin has special plans for Gotham City, but Batman has other ideas. Something has to give one way or another… 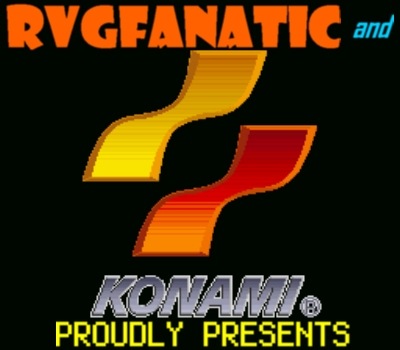 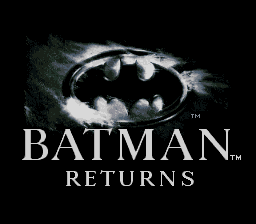 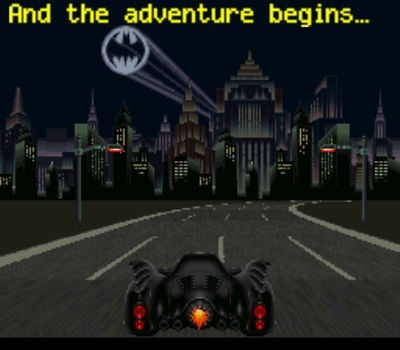 The action starts out hot in Gotham Plaza where the Red Triangle Circus Gang launches an unsuspecting attack on the city’s Christmas festival.

Batman’s brutality knows no bounds. You can slam bad guys against the wall or even through glass windows! You can even throw a bad guy into his buddy, taking out both at once.

There’s a small variety of different clowns to beat up. One of them is the bazooka clown, whose missiles can actually harm their own. I love it when video games allow bad guys to accidentally hurt each other. It makes it feel a little more realistic and definitely a lot more enjoyable.

The game does a good job of matching the gritty feel and somber mood of the movie. Back in the early ’90s, more often than not it seemed, movie-to-game adaptations didn’t have the best track record. But Batman Returns on the SNES did not fall victim to that.

Even the cutscenes have this grittiness to them that perfectly replicates the seediness of Gotham City.

The visuals were striking, especially for April 1993. Sprites are huge and clutter the screen. I love the little touches sprinkled in here and there as well, like those giant statues for instance. Just like the ones from the film!

Batman Returns has certain sections that force you into a single plane. These segments limit your ability to move around and avoid enemy attacks. It is a bit infuriating and certainly not as fun as the free roaming sections of the game. In this scene, you’ll have to attack with your trusty Batarang projectiles. These sections feel a bit stiff, sluggish and stilted. 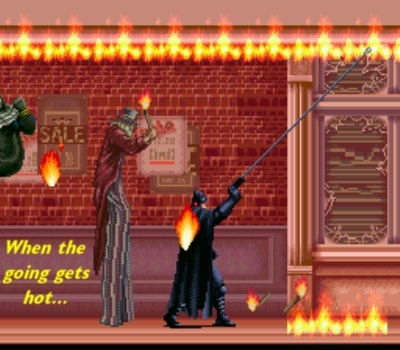 Thankfully, we soon get back to the regular beat ‘em up bits. This is one of my favorite parts of the game. Snow litters the street as innocent chubby children scurry away to safety. Crazy clowns abound. Dark alleys around. Good stuff!

At the end of this level you come to a towering bloke reading the paper. Every evil operation needs some muscle. Welcome to the muscle. It won’t be long before he rips the paper to shreds and then rips your own damn head right off! 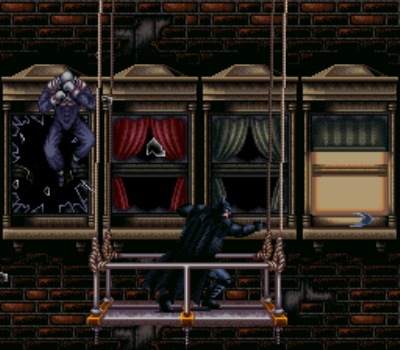 What scenes of spiraling madness await beyond this? Play it and see for yourself… 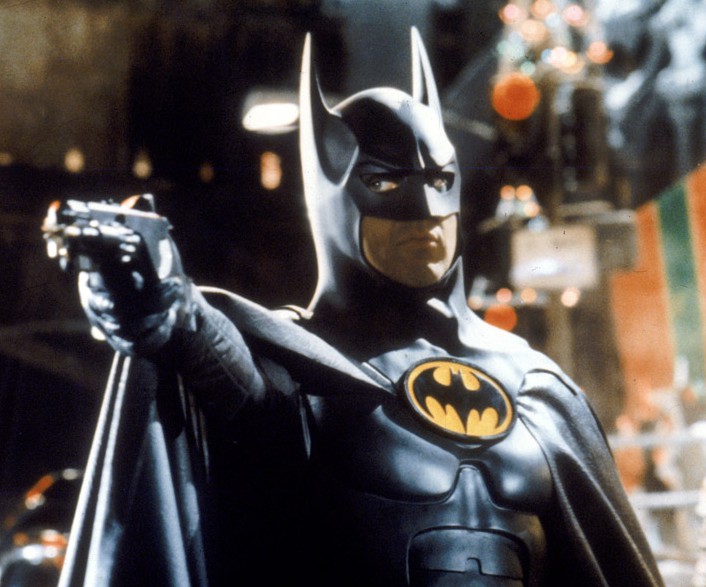 Back in the summer of 2011, I organized a volunteering event with some friends of mine. We were going to feed the homeless and wash their feet. It was a humbling experience that I’ll never forget. The first man whose feet I washed told me right off the bat, pardon the pun, that his name is Bruce Wayne. Furthermore, he claimed to be THE Batman. Naturally, I thought he was joking, possibly even crazy. As I washed his feet, “Bruce” shared childhood stories of his father with me. He worked 29 years in the truck driving business and spoke fondly of his dreams growing up. Didn’t take long for me to realize that he was actually quite normal but had a few bad breaks in life. At the end he thanked me for the foot washing and started to leave.

Suddenly he stopped and turned back to me. He reached in his pocket, fishing for something. Then he showed me his identification card. SON OF A BITCH. Sure enough, there it was, clear as day. Name: BRUCE WAYNE. He wasn’t lying, he really was Bruce Wayne. He flashed me a little grin and I returned the gesture as we nodded before he walked out. Later I spoke with the coordinator and she explained to me that Bruce is a regular and how his Batman persona is his own personal way of coping with being homeless. Wow. It’s deeper than just “Oh, this dude’s a crazy homeless guy.” The experience reminded me not to judge a book by its cover and to walk a mile in someone’s shoes — or wash their feet — before you decide what their story is. 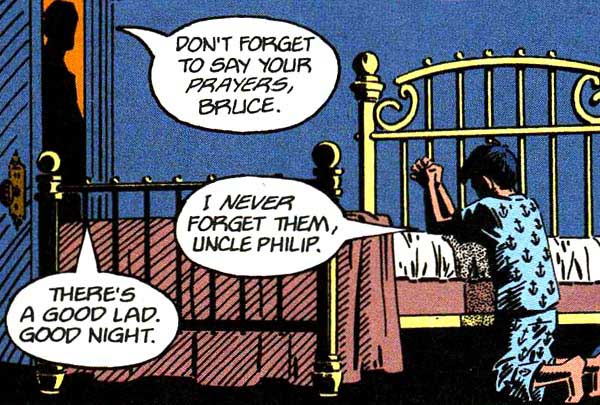 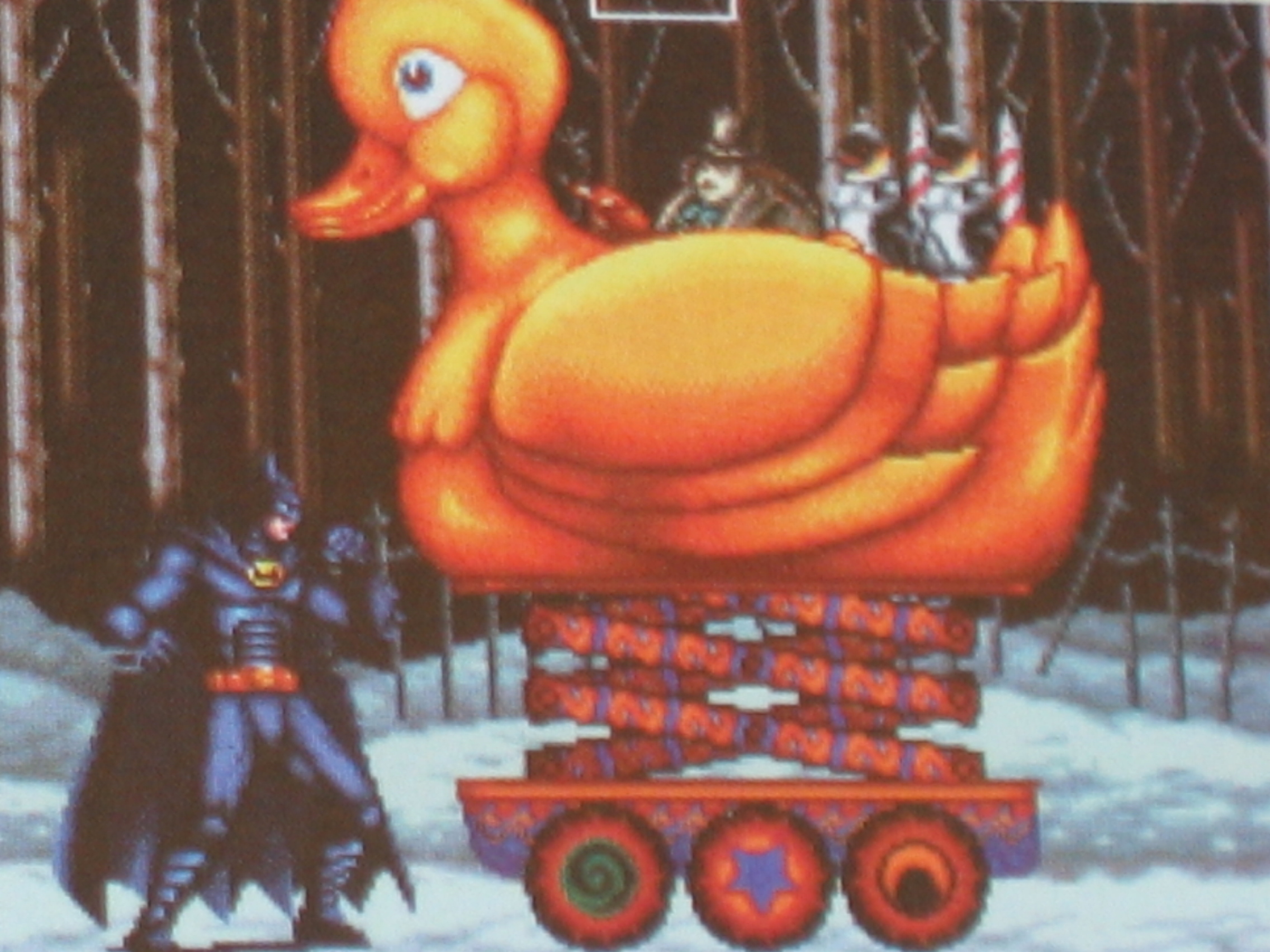 Batman Returns fared well with the critics. EGM’s Martin Alessi rated it 85% while Howard Grossman scored it at 86%. GameFan gave it ratings of 84, 85, 92 and a whopping 97%. Super Play, notorious for giving beat ‘em ups a hard time, rated it 87%. Batman Returns owns the distinct honor of being the highest rated SNES beat ‘em up in Super Play history. The SNES version of Batman Returns has a favorable reception with fans as gamers often rave about Batman Returns as being one of the better beat ‘em ups in the SNES library. By most accounts it was yet another Konami smash hit. Talk about having the Midas touch! 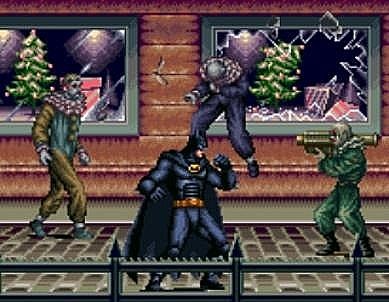 I have to be honest, I’m not too crazy about Batman Returns. I know most people rave about it like it’s something epic but I just didn’t quite click with this one as I was hoping to. I think it’s a good game but not a great one, which most people seem to think it is. By no means am I saying my opinion is right and theirs is wrong. That would be silly. I’m simply saying that for me, Batman Returns is a case of diminishing returns. It starts off with a bang. You’re in the seedy streets of Gotham, kicking clown butt at every turn and throwing them through windows, even bashing their heads together. It’s all very satisfying indeed.

But then come the single plane sections which are a lot more restrictive and I feel are just not very fun. I even detected a slight bit of input lag, but maybe that’s just me. The platforming felt a bit clunky, too. The Mode-7 Batmobile stage, although it looks great in a still screenshot, is more of a chore to play than it is a good time. Some of the boss battles, especially Catwoman and The Penguin, felt very unfair. I took a lot of seemingly mandatory hits I just couldn’t avoid (particularly with The Penguin in his Mary Poppins form). I don’t mind a hard challenge but unavoidable hits is just plain annoying and spoils the overall experience a bit. 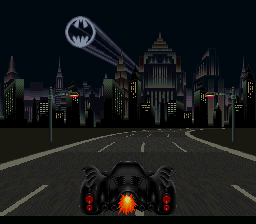 I wanted to like Batman Returns so much, and in certain parts I really do. Namely any part that was free roaming and allowed me to just beat up clowns in the good old fashioned beat ‘em up way. Not a fan of the cheap boss fights, Batmobile, platforming or single plane sections as they really detracted from the overall package for me. I can see why many rave about this game — it packs a punch visually, sounds great and is very faithful to its source material. But I just can’t give it an enthusiastic thumbs up; it contains a few too many warts and niggles for me to overlook. At the end of the day it’s still a quality Konami product and a solid example of a movie-to-game adaptation done right. But there’s a reason why — although many do like it a lot — Batman Returns isn’t quite in the same pantheon as some of Konami’s previous SNES classics.

Batman: I’m tired of clowning around!

Clown: Really, you? You’re one to talk, Mister! Look, if you returned in 1992, then how, pray tell, OH HOW did you begin in 2005?! What are you, some sort of magician?! Penn and Teller? David Copperfield? Can’t make up your bloody mind, can ya! You’re the one who needs to stop clownin’ round! Just WHO ARE YOU EH!?!

Batman: You need serious help. Here, let me give you a hand…