When you think of the Super Nintendo, what characters come to mind?

… On second thought, that last one’s unlikely, I reckon.

How about MARK CALLOWAY?

Possibly unbeknownst to most of us, Mr. Calloway actually has more in common with the SNES than one might initially think.

THE DEBUT OF TWO PHENOMS

A little over 26 years ago as I write this, the Super Famicom (Japanese Super Nintendo) launched in Japan. It made a huge splash and as history dictates it went on to smash a lot of video game records and burrowed its way deep into our gaming hearts.

Meanwhile, over in America, with no internet back then and being all of seven years old, I had no idea that the Super Famicom just made its big splash. All I knew was I couldn’t wait for the 4th Annual Survivor Series event! It was Dusty Rhodes’ Dream Team (R.I.P. Dusty) versus Ted DiBiase’s Million Dollar Team. But wait, DiBiase had a mystery partner. The match graphic to this day is seared into my memory bank. I remember my brother and I having long discussions about who it possibly might be. An old familiar face from the past, or a brand new superstar? It was exciting times. Finally, the day of the 1990 Survivor Series came. November 22, 1990. It was exactly one day after the Super Famicom made its debut.

I’ll never forget the moment DiBiase hit the ring with only two of his three team partners backing him. The WWF (World Wrestling Federation) played up the drama perfectly to the very end. My brother and I were on the edge of our seats. Who and where was this mystery partner?

“I’ve said it a million times before — EVERYONE’S GOT A PRICE FOR THE MILLION DOLLAR MAN! So without further ado, I’ll introduce to you now my mystery partner. Led to the ring by his manager, Brother Love, weighing in at THREE HUNDRED AND TWENTY POUNDS, from DEATH VALLEY — I GIVE YOU… THE UNDERTAKER, HAHAHAHA!!!”

Gorilla: The Undertaker — the mystery partner — is now revealed!
Piper: I never heard of him –
Gorilla: OH TAKE A LOOK!
Piper: HO-HOLY COW! … LOOK AT THE SIZE OF THAT HAM HOCK! … Check out them drumsticks, baby!
Gorilla: Three hundred and twenty pounds, looks to be 6’9″ 6’10” — somewhere in that neighborhood, Rod.
Piper: 6’10″… I don’t know, it’s hard to tell from here…
Gorilla: There’s only supposed to be four members on a team — this guy makes four and a half, MAYBE FIVE!

The music, the look, the entrance, the commentary… everything added to create a perfect storm. It was an unforgettable debut — one of the best in the company’s history. The Undertaker was an instant star.

There was something different about the Undertaker. You just knew he was going to be a mega star. Little did we know… just how big of a star he would become. But yeah, such great memories that night over 26 years ago now. The Undertaker towered over everyone in that ring, and he just looked like he was in a whole ‘notha league compared to the others, and there were some true legends in that ring! Million Dollar Man Ted DiBiase, Honky Tonk Man, Dusty Rhodes and Bret Hart to name a few. Taker held his own and then some. Great wrestling memory!

Billed at a towering 6 foot 10, and seemingly impervious to pain, fans quickly took notice of his unparalleled combination of size, power and agility.

The Undertaker dominated the WWF, going undefeated for over a year in his meteroic rise to the top. Just one year removed from his debut, he made history when he pinned the IMMORTAL Hulk Hogan to become the new Heavyweight Champion at Survivor Series 1991. Few titans before could touch Hulkamania. But the Dead Man was a different sort of beast. The industry never saw anyone quite like the Undertaker before.

The Super Nintendo was released in the US August of that same year, and as the Undertaker cemented his place in wrestling history in ’91, so too did the SNES (in gaming history, mind) by beginning its worldwide march toward market domination.

The Undertaker appeared in no less than six SNES games, and even more. That’s more than most other SNES characters, and gave Mario a run for his money! 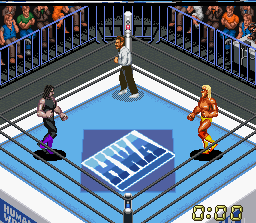 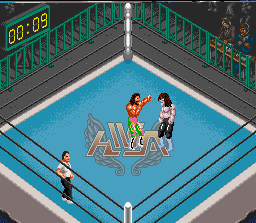 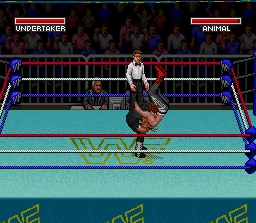 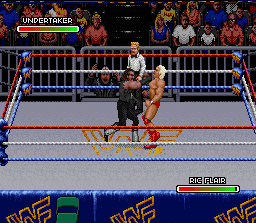 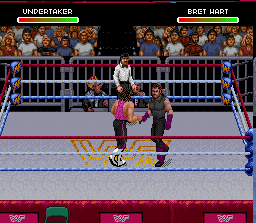 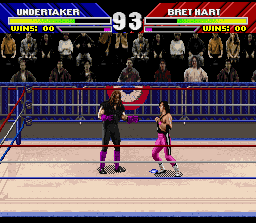 The Undertaker had an unprecedented WrestleMania record of 21-0 before Brock Lesnar defeated him at WrestleMania 30 (2014) to make the Dead Man 21-1. Currently, his record sits at 23-1 and he’s definitely gunning for 24-1 at 2017’s WrestleMania 33 in Orlando, Florida. Amazingly, 26+ years later the Undertaker is still wrestling (albeit on an extremely part time basis). The Super Nintendo, although long “dead,” continues to live on in the hearts of retro gamers worldwide. The Undertaker and the Super Nintendo are two phenoms in their respective line of business. Their legacies speak for themselves and I’m positive both will be remembered fondly for generations to come.

I’ve always been a pro wrestling fan from the days of the late ’80s when I first saw the union of the Mega Powers (Hulk Hogan and Macho Man Randy Savage) on an episode of Saturday Night’s Main Event in the fall of 1987. I remain a fan to this day and the Undertaker is a true force in the industry. I got nothing but love and respect for the man and the myth. The Super Nintendo, of course, is my favorite gaming system of all time, and it’s fun to think about the similarities the two share with one another. Who knew the SNES and the Undertaker would have so much in common? They’ve given us 26 years of countless memories, left a lasting legacy and are sure to still be lionized in the years and generations to come. A toast to two awesome phenoms — the Undertaker and the SNES!