Violinist of Hamelin is a unique, fascinating and quirky little game. Let’s take a closer look. 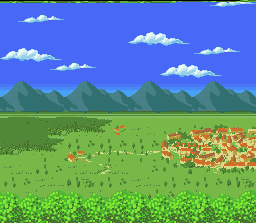 Based off the anime/manga, your task is to guide a young female (named Flute) safely to the exit of each stage. You control the violinist — Hamel. It’s an action/adventure game with puzzle elements, so it’s definitely not your average run-of-the-mill platformer. The way you interact with Flute is a riot, as you’ll see. You don’t actually control Flute directly; she follows you until you press “X” to deactivate her. But how you get to use her is rather entertaining…

Don’t ask why, but Flute can morph into one of 16 different things! Provided, of course, you locate the proper icon first. Certain sections require certain transformations. It’s all about teamwork. As said earlier, this isn’t your everyday mindless platformer! Each transformation serves its own special purpose, and using the right one at the right moment is key to your success.

The interaction between Hamel, Flute and the level design is really what makes the game work so well. You can stand on her head, pick her up and carry her around, or even toss her like a cannon ball into enemies or impeding brick walls!

That’s right, Carl Lewis you are not. So what now? Hit ‘START’ and locate the proper transformation for the job. You only have one at this point, so it’s pretty obvious what’s needed here. Later on, as you grab more and more of the 16 total transformations, it’ll be a little tougher to figure out which one to use, but it’s usually fairly obvious. It’s a fun gimmick that makes up a bulk of the gameplay.

Each transformation serves a specific function. The first one, the ostrich, allows you to cross perilous territory that would otherwise kill you. Press “X” at any time to transform back to Flute.

Right off the bat here, you collect your third transformation icon. It’s a robot that can smash any wall. You can also ride it to make your way safely across treacherous terrain, similar to the ostrich.

Like Castlevania‘s red skeletons, that yellow bugger there cannot be permanently disposed of. You can stop him, but he’ll resurrect after a few seconds. Make haste!

A MISSING KEY AND A HUMAN DART

As mentioned earlier, puzzles play a part in the game. Here’s a neat little one within the castle walls. 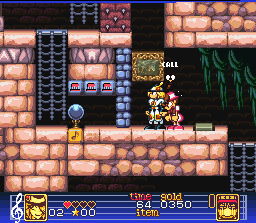 Hmmm, I gotta get to the top somehow… first, select the robot transformation.

Now, position Flute on the little switch and deactivate her so she won’t move from that spot. By standing on the switch, the block up top disappears. Now fire a note at the crystal ball, which results in dropping the makeshift platform there. Nice.

Once you get to higher ground press “X” again to call Flute, and she’ll properly climb the ladder. HURRAH! We’re home free now…

Kill the snake, grab the key, the new icon (not visible here) and go!

Prior to playing this game for the first time back in 2006, I had heard a smattering of people praising this game as one of the better Super Famicom exclusives. It’s definitely got a certain charm to it and feels different from your typical SNES game. It’s not quite a platformer, it’s not quite a puzzler, it’s not quite an action game. It’s a hybrid of all those — a platforming puzzle action game that has that special touch of Japanese cuteness and oddity that makes it quirky and memorable. The only real negative I have to say about this game is that it sure could have used a save or password system. It’s no short game by any means. I don’t like the fact that you have to beat this game in one sitting, and that each time you fire it up you have to start from the very beginning. Other than that, Violinist of Hamelin is quality through and through.

4 thoughts on “Violinist of Hamelin (SFC)”