When I was a little kid, I was absolutely obsessed with monsters. Fascinated by these morbid, curious creatures. Remember the ole boogeyman in the closet, or the monster under the bed? In 1989, there was a little strange movie geared toward kids that was all about that. It dared to push the cinematic envelope by asking the most important question of our time: What if, JUST WHAT IF, there were truly monsters living underneath our beds?

Brian Stevenson (played by Fred Savage, AKA Kevin Arnold from The Wonder Years) is new to town. He hates it. Absolutely detests moving towns. But one night his life is forever altered when he discovers a wild, fun-loving monster lives under his bed. Maurice (played by Howie Mandel) and Brian form a unique friendship where they travel through the monster underworld by night. They also warp to other kids’ homes via some serious “bed hopping.” There they cause all kinds of mischief and pranks to unsuspecting, sleeping punks. It’s the stuff kids dream about: traveling through space with a monster causing all kinds of good-natured suffering and hi-jinx.

The film used a brilliant mix of bright lights and colors to show off its energetic alternate monster-verse. It was a world teeming with life and energy. It was where you go to escape from the doldrums of the world and to recharge your batteries. Down there there were no limits, and a kid could freely be a kid. But of course…

There lied a real terrifying dark side to this alternate universe. Jagged stairways, dark corridors and foreboding denizens roam about the hellhole. For as much fun as it presented, there also permeates a sense of dread and the fact that something just isn’t right. Something you can’t quite put your finger on, but you know it’s a place you shouldn’t be. The recipe for every kid’s dream but also for their nightmares.

It’s funny looking back at the things we watched and loved as kids. Although it’s rated PG, this movie is exactly the kind of film we would never get in today’s politically correct world. It was full of bizarre sights and oddly subtle spine-tingling visuals and costume designs. Just look at those 3 monsters up there. There is something unnerving about the fact that they’re glaring at a baby with the purpose of making the baby shit its pants. Hell, this movie gives me the creeps more than 90% of the R-rated horror movies released today!

Goosebump-inducing stuff, indeed. Oh, and still to this day, thanks to this movie whenever I see a Mayflower moving truck driving around town, I can’t help but think back to the opening scene. The really cool thing is, the Mayflower truck design is STILL the same as the one found in this 1989 movie. It’s refreshing to see some things DON’T change with time.

Was it just me or what? Hmm, maybe just me then. At any rate…

[Wait a second, I thought something was off. This is a review for Little Magic, not Little Monsters, ya git! -Ed.]

Gawd damn. I’m getting too old for this shit. Alright, Little Magic, then!

Ah Little Magic… I have to admit, growing up this was a fav — er… wait. Hell, I never heard of it until the summer of 2006 when I was on my crusade for obscure Super Famicom goodness! Indeed it is quite obscure and rarely ever talked about. Shame, because it’s an excellent brain-teaser of a game.

LITTLE MAGIC is not what you’d call an epic game, or a showcase piece. Hell, it looks like something off the 8-Bit Nintendo… Adventures of Lolo immediately comes to mind. But as we all know, gameplay reigns supreme, and Little Magic is rock solid in that department.

As May, a young witch-in-training, you must transport a fire stone to its pedestal in each level. It’s a simple concept, but the complexity of the level design becomes increasingly difficult.

May moves one square for any D-Pad movement you make. So she cannot turn without moving. There are 3 ways to move the fire.

May cannot walk on water, though. Some wizard in training eh? 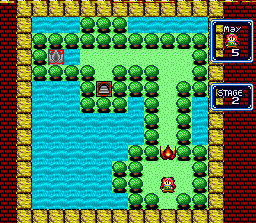 The goal is to transport that fire stone to the pedestal and then head to the goal. All levels are single screen. Use her psychic power to push the stone to its pedestal. The magic ball should be used when May is out of poking range of the stone. 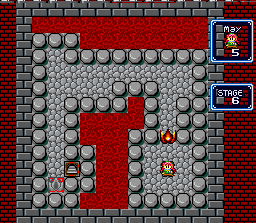 The first several stages are easy kid stuff. Level 6 is where it begins to pick up though… 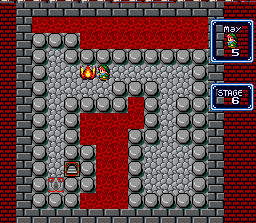 You’re toast if you push the fire stone against the wall there. So what to do? Form a magic ball next to the fire, then move May to the top corner quickly before the explosion. 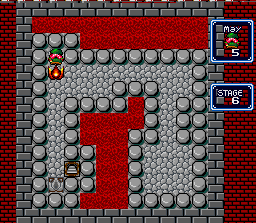 Once the ball bursts, it’ll push the fire stone over one space. And since you’re positioned correctly, you can now easily push it down to its exit point. Sweet! Stage 7 unsurprisingly gets a little tougher. 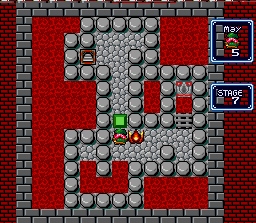 Stairs melt away as soon as you touch them. Be sure to watch the intro before playing the game.

It’ll teach you some fancy tricks.

As you progress through the levels, enemies crop up as well, in addition to warp points, spikes, gaping holes and even enemies. In all there are 100 levels. 6-character passwords are provided after each contest. As you’d expect, there are themes for each set of stages as well.

The Game Boy Color version also received a Japan-only release. Crap graphics make a bad game not. This is a classic example of that. Little Magic is a praise-worthy diamond in the rough and definitely worth hunting down. If you get your rocks off by staring contemplatively at the screen until inspiration breaks through with the resolute “AH-HA!”… then Little Magic is right up your alley.

With 100 mind scrambling stages, it’s sure to be a lifetime project to complete. The thing I love about these type of games — they’re fun to relax with for 20-30 minutes after a long day of work. Sure, sometimes you just want to pop in a mindless beat ‘em up, but there’s something rather rewarding about staring at the screen trying to solve a puzzle until that light bulb moment strikes. A six-character password tops off this cake. One of those games you can pick up and play at any time, leave for 3-4 months and come right back to. One of these days, I’m going to help May pass her graduation exam and become a full time witch. Even if it takes me an entire lifetime! *shakes fist*