Beat ‘em ups ruled the arcade scene in the early ’90s. Irem released Undercover Cops in 1992. They then went to work on a Super Nintendo version but that was sadly canned. However, Varie (you might remember that name from my previous review of the Shin Nippon Pro Wrestling trilogy) picked it up and released a Super Famicom only version in March of 1995. I was beyond thrilled to discover this fact upon my SNES resurrection in early 2006. I always wanted to play Undercover Cops on my SNES. Thanks to Varie, I now could. Unfortunately, the port falls a little flat with me. I couldn’t help but feel it was a little lacking. But I’m getting ahead of myself. Let’s rewind a bit by jumping 25 years into the future…

Council: “Everyone, the peace of our town is at its worst condition ever.”
Mayor: “I have a suggestion. Let the City Sweepers clean up the villains!”
Council: “Of course, Mayor. Violence begets violence! Let’s do it!” 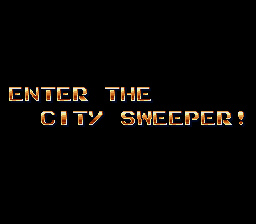 Collectively, this fearsome unit is known as…

Individually, they’re known as, well, let’s go down the line. 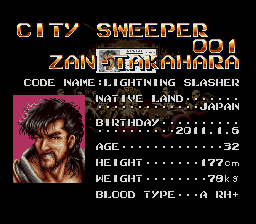 Zan Takahara hails from Japan. He is the balanced fighter of the group. 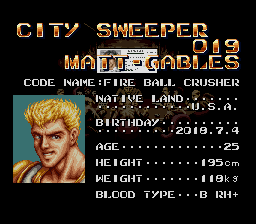 Matt Gables is your good old American football player turned City Sweeper slash Undercover Cop. Notice his birthday — July 4, 2018 — as of this writing he’s almost about to be born. Surprise surprise, he’s the slowest but also the strongest of the trio. 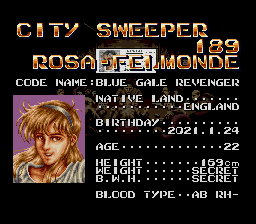 Rosa Felmonde hasn’t even been conceived yet! Hailing from England, Rosa is the token quick but weak female fighter of the group.

The first thing I noticed about Undercover Cops is how dirty the game looks. I don’t mean that in a bad way; I actually like that it’s so gritty and grimy. It gives the game a rather grim and bleak atmosphere. So many SNES games are full of bright and bold colors. Not here and that’s a welcome change. I almost feel like I have to take a shower after playing this game.

Battle your way through rundown abandoned buildings, grimy festering docks and inauspicious underground tunnels to name but a few. Everything is in a deep state of decay. The enemies mostly consist of subhuman creatures. A wretched decrepit flock of sideshow freaks. You can bet they haven’t bathed in months (if not years). Even the good guys appear unpleasant and a bit dour.

Little details, as seen above, add to the fun of the game (it’s a shame then that the best stuff occurs early on). Crows fly off revealing in its wake two filthy bastards who soon rise like zombies. Send ‘em back to the hell hole they came from!

WANT FRIES WITH THAT?

To replenish your health, most beat ‘em ups have you consuming burgers, drinks and assorted meat. But not in Undercover Cops. So what does one eat? Mice, chicken, even snails! Gobble them up before they can scamper (or crawl) away. To make matters even more unsettling, the cops voice their pleasure whenever eating such delicacies. Zan gruffly shouts “GOOD!” and Matt screams “DELICIOUS!” Yum.

EVERYTHING BUT THE KITCHEN SINK

While other beat ‘em ups give you knives to fling or bats to swing, Undercover Cops on the other hand walks to its own beat. For example, nothing says PAIN quite like tossing flopping fish at the opposition.

But my favorite instrument of destruction is the random concrete pillar. You can either knock it over or unearth it with your bare hands (it’s quite amusing to watch the ongoing struggle that ensues).

Naturally, Matt is able to pluck it out faster than Zan or Rosa. Matt and Zan can use the pillar the same amount of times while it breaks fastest for Rosa. Poor Rosa. She’s got a serious case of Breath of the Wild…

It’s always lovely to see companies throwing in clever little easter eggs that show off past franchises. I always enjoy seeing stuff like that.

The concrete pillar just might be my favorite non-projectile based weapon to use in beat ‘em up history. It’s so satisfying to knock over the deformed cretins with it.

Here we come to the first boss, Parcs. He’s hiding a nasty secret beneath that weird looking exterior. Weaken him and soon he reveals his true form.

Bonus points for a highly creative first boss encounter. I love it when beat ‘em ups let you interact with the environment so seeing this for the first time had me jumping out of my chair. It’s too bad though that the rest of the boss fights are nowhere near as creative or fiendishly fun. 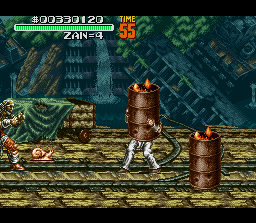 The beginning of Mission 2 is my favorite part in the whole game. Kick the barrel of flames or better yet, heave it at the enemies.

Upon impact the barrel will liberate a flurry of burning torches. It’s time to burn some bad guys alive! WICKED fun.

The scoundrels can toss the torches as well, and if you’re knocked down, one rapscallion in particular enjoys a hearty laugh at your expense.

The second boss, Fransowors, is where I personally believe the game began to lose me. It’s such an awkward character design and hell, even the name itself is weird. I didn’t like the aesthetics of this boss encounter at all. The background is dull and drab and Fransowors is one big annoying crybaby. It’s a major disappointment coming off the brilliance of the first boss fight with Parcs. 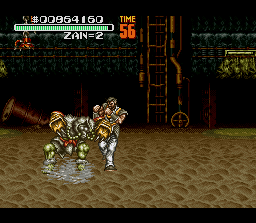 These underground diggers are deadly when traveling in packs. They like to do the spin cycle which automatically knocks you down. Unfortunately, because you aren’t granted temporary invulnerability after being knocked down, they can and will spam attack you until your life is gone. Only then can you beat them when you’re revived and then granted that precious second or two of invincibility. I hate when games make you lose a life and there’s nothing you can do about it. To me that’s plain lazy and poor game design and programming. My experience with Undercover Cops began to really sour at this point.

I dig the flashing tunnel. Reminds me of Elevator Action Returns… 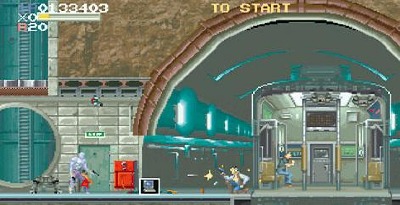 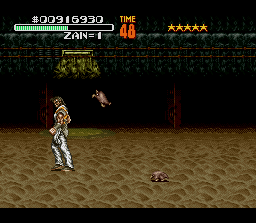 These suckers greet you with a nasty little love tap if you’re caught in their path. They can’t be killed so just steer clear as they mindlessly march on by. Sometimes it gets really crowded and it feels impossible to come out unscathed. Luckily, any damage they inflict isn’t too much. Still rather annoying, however. 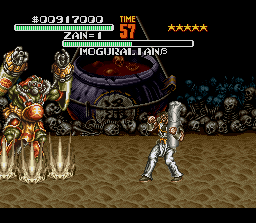 The end level guardian is a monster born from malpractice. And it wants you for dinner… not as a guest but the main course attraction! Sadly, this is where the game ends if you play it on Easy. Only on Normal or Hard can you go through all 5 missions. Below are some quick shots of missions 4 and 5 (note: these screenshots will depict the original arcade version). 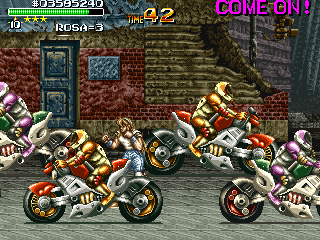 Mission 4 = Motorcycle Madness. The SNES port allows you to assign a button to the run command. Turn this option on to make your life a lot easier. 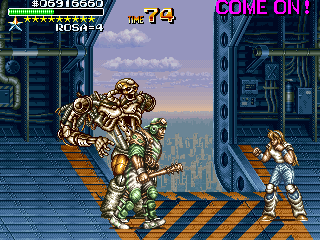 Mission 5 is the longest and most tedious level in the game. You fight across a seemingly endless skyship where you battle a never-ending supply of cronies and a handful of Parcs (the boss from Mission 1). 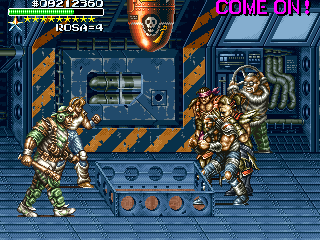 Better stop Dr. Crayborn from launching the nuke before it’s too late. You’ll get a bad ending if you fail to do so. 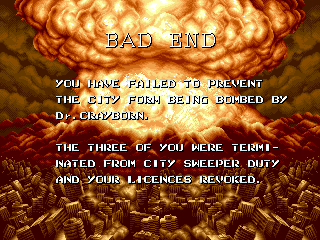 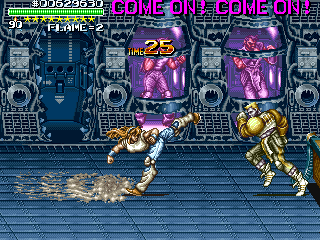 Finally coming toward the end, you must battle zombie versions of the team! 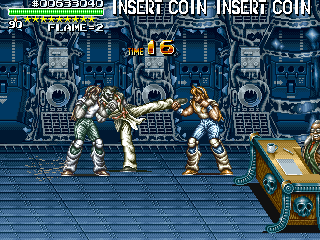 Where’s Rick Grimes when you need him? 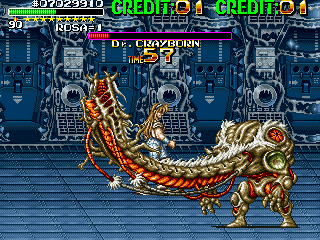 Doctor, I think there’s something wrong with you… 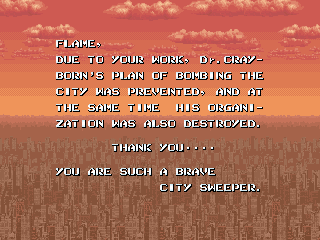 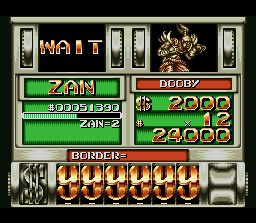 Your performance is tallied up at the end of each Mission. Depending on how much money you’ve earned, you’ll regain a certain amount of health (if applicable).

Obviously, there’s going to be a certain amount of sacrifices made when a company converts an arcade game into a much smaller SNES cartridge. Undercover Cops is no different. It was something you just accepted as a kid and in most cases, you were just happy to have a home port to mess around with.

Irem went on to make other similar post-apocalyptic arcade action games. These include:

A lot of the team who helped made Undercover Cops later formed the Nazca Corporation. They were responsible for a very famous Neo Geo game…

PARTING IS SUCH SWEET SORROW 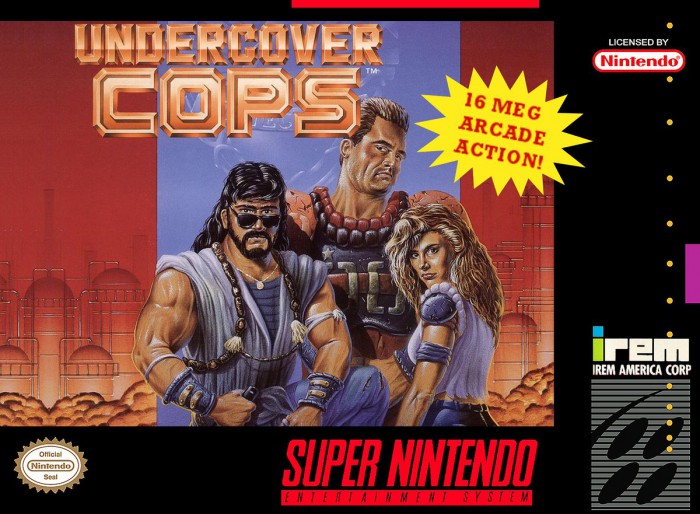 Undercover Cops was actually set for a March 1994 release. Hell, it was even reviewed in the March 1994 issue of Nintendo Power Magazine (issue #58). Sadly, it was canned and never saw the light of day in North America. Varie picked up the publishing rights exactly one year later and released it in Japan only on March 3, 1995. The actual Super Famicom cartridge currently commands a minimum of $200 — yowzers!

Maybe the ugly Americanized art sealed its own fate. By God is that fugly! Should have gone with the Japanese style box art…

Looks like the US version was fully finished and ready to go, especially if you’re going off the fact that Nintendo Power reviewed it. Not sure why it was canned except maybe Irem didn’t have faith in it moving the needle as it was a port of an arcade game two years long in the tooth and one that wasn’t a household name in North America. Whatever the case may be, it’s always sad to see promising games cancelled. I’m glad Varie picked up its publishing rights in 1995 even if the port job is a bit disappointing on Irem’s part. 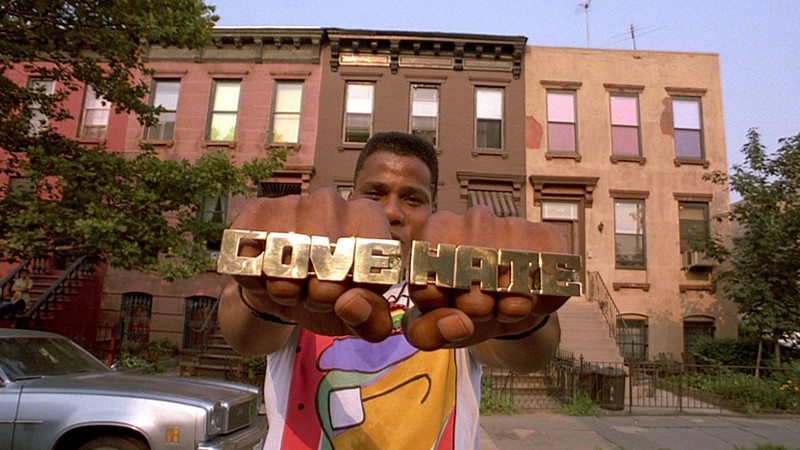 Remember Spike Lee’s movie Do The Right Thing from 1989? The character Radio Raheem sported a four-fingered ring on each hand, with LOVE on the right hand and HATE on the left, to symbolize the struggle between the two emotions. That perfectly describes how I feel about Undercover Cops. I have a love-hate relationship with this game. I love that it was released at all following the US cancellation. I dig how twisted it can be at times, from eating snails to even knocking the skull off of Mission 4’s boss post fight and scarfing it down like how Joey Chestnut eats his hot dogs! I love the post-apocalyptic atmosphere. However, some of the aesthetics could use a little more work. Not having a 2 player option in 1995 is inexcusable. It reeks of laziness. I can see why it’s 1 player only, though. Even in the 1 player mode there’s a bit of occasional slowdown. I can only imagine how much worse it would be in a 2 player mode. But other companies managed to make it work, relatively speaking, so Irem should have found a way as well. I also hate that the game loses a lot of its appeal and luster by around Mission 3. I find it more repetitive than other beat ‘em ups from that era. 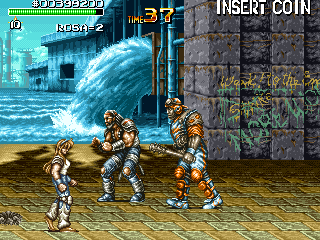 Not having a 2 player mode is not a deal breaker though especially if the game itself is good enough on its own. Sadly, there’s something missing. It’s definitely not a bad beat ‘em up but I can easily think of 10 more competent SNES beat ‘em ups I would much rather play. Undercover Cops is one of those games that start out real promising but quickly lose steam less than halfway through. Others have raved about this SNES version but try as I might over the 12 years I’ve owned it, I just can’t give it a ringing endorsement.