Last Saturday night I was inspired to fire up the old NES for the first time in ages. I still love the system to this day but in terms of actually playing it, it’s been a while. I don’t get to game as much as I’d like these days due to work getting busier and busier, but when I do game I tend to play my Super Nintendo. But last Saturday I had the strangest and strongest urge to revisit my old friend, and my old flame, the 8-bit Nintendo. The first game I played? Super C. Now back in the day I recall playing it briefly, but never thoroughly, and I was adamant on changing that. The game initially kicked my ass until I enabled a few Game Genie cheats to help see me through. Normally I try to beat a game fair and square but I had no guilt here. I just wanted to see all of the crazy levels. This was my journey through hell and back.

Note: Credit vgmuseum.com for these pictures.

Note 2: This past weekend I also published reviews for NES Contra and Contra III: The Alien Wars. Be sure to check them out, too. 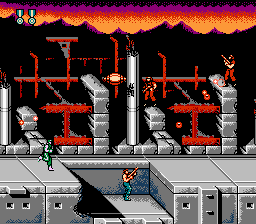 Super C came out April 1990, two full years before Contra III: The Alien Wars. I can kind of see where the influences for Contra III‘s first level emanates from. Some of these sights here look awfully familar. Hmmm….

The first stage is pretty solid. Sure that first boss isn’t anything mind-blowing or ultra memorable, but I love how after you destroy all the turrets a red beating orb appears in the middle for you to gun down. It sets the stage as a lot of the bosses have compartments or turrets to take out first.

Indeed, playing Super C is like peering into the future. Some of Contra III‘s levels and ideas seem to derive somewhat from Super C.

It is. The first game’s jungle had lots of different platforms to jump on or off of. This jungle version lacks that. It’s pretty much a straight flat shot through, and that takes away a lot of the fun and intrigue. Don’t get me wrong, it’s still a fun level to work your way through, but it’s just not as fascinating as the original.

I keep dying and end back up with the weak pea shooter. Did I mention this game is double tough?

The plates come down one at a time and it’s pretty fun to navigate successfully, but I want some more monsters in my Contra bosses, damnit. 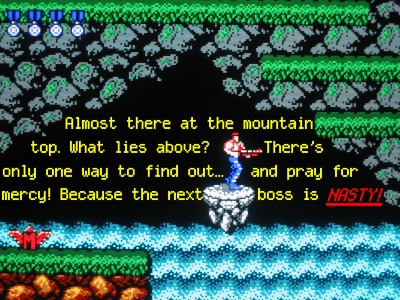 I do prefer the Waterfall level in Contra over this one in Super C, but that has been a running theme, no?

It was nice to finally go through this game last Saturday, even if I did have to enable a cheat code in order to do so. I managed to finish the game with precisely one life remaining. I doubt that I could ever legit beat this game, even if I were to devote 20 years to mastering this game. I love a good hard challenge but this game seems to cross the line and wander into super cheap territory. I do like it a lot, but I just wish it weren’t so damn difficult. It’s so hard that for me it takes away some of the fun if you’re playing this as is. I know there is a camp of Contra fans who prefer Super C to the original. But for me the original will never be touched, outside of Contra III: The Alien Wars that is. Still, Super C stands as a worthy sequel and it’s cool to see the influences it would come to have in Contra III.