My uncle, the same crazy uncle who introduced me to Halloween as a kid, took me and my brother to Target one night in 1989. At that time we had our Nintendo for a good two years. I vividly recall browsing the toy section, gawking at the latest in the DINO RIDERS lineup. I had just seen the cartoon which I thought was one of the coolest things I’d ever seen. Then, as tradition dictated it, we migrated from the toy section to the video game center. Upon seeing the epic Karnov box, we immediately fell in love with the exotic art. Our uncle took notice of our excitement and bought the game on the spot without either one of us even needing to beg him. That was good ol’ Uncle Jimmy for ya, always the super cool uncle saint that he was.

We came rushing home that night, mom in the doorway berating my uncle for buying us the game. As always, he played it cool and managed to diffuse the situation. Back then Uncle Jimmy played his fair spot of games too, and I fondly remember how the three of us retired to the gaming room for the evening. We began alternating play, though mostly my brother Kevin played. Luckily it turned out to be a good game and not a dud, which was always a risk when basing your purchase decisions solely off the art of a box cover. But that’s how it was in those olden days, you see. You relied on your friends, your local mom and pop shop, and your gut instincts. We never could beat Karnov, but we always had a blast trying. We’ve long since passed it on to our cousin David, Uncle Jimmy’s son, and David has long since lost the game to the sands of time. But I will always remember the fun times we shared with Karnov — from that innocent night at Target to all the evenings spent between the three of us trying our damnedest to beat the game once and for all. 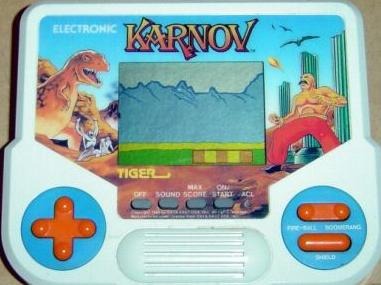 Anyone remember this? I wanted to buy it but since we had the NES game my parents never did. 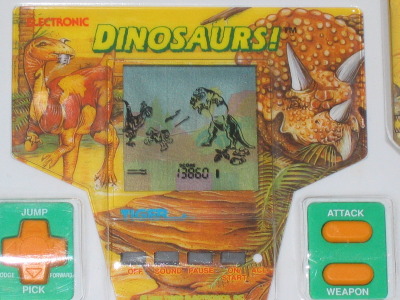 Instead I got this lousy piece of crap. OK it wasn’t THAT bad; I spent quite a few road trips playing this in the backseat after all, but I bet it ain’t no Karnov! 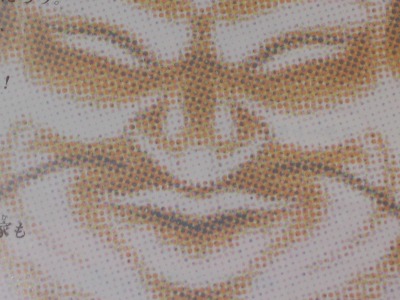 Long before he turned to the dark side, Karnov was a brave and vigilant soul. Let’s check it out… 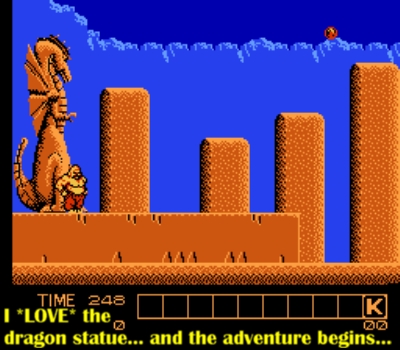 Magically transported here via a lightning bolt, right away I knew Karnov would not disappoint. The dragon statue there set the mood proper, and the three of us — my uncle, my brother and myself — were off and running.

These icons add some extra depth and strategy to the game. They have different effects and finding out which one works best where will go a long way in seeing you through. The ladder allows you to reach items you couldn’t otherwise. Simply climb down and the ladder is safely back in your inventory. Sweet. 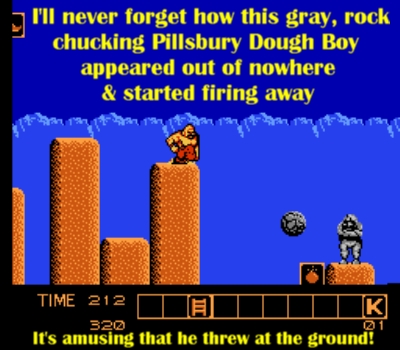 Remember how they seemed to laugh at you as they threw their rocks? It’s funny how we recall the smallest most obscure memories… 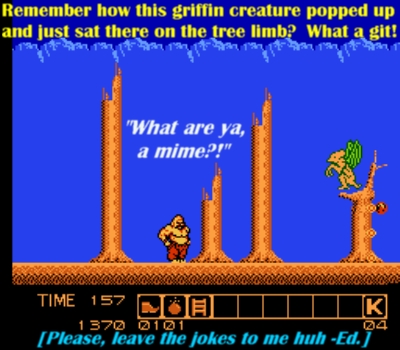 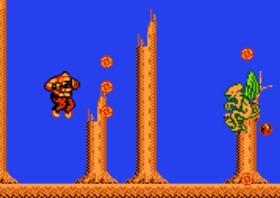 But as soon you open fire, it springs to life firing right back at ya. I love the bizarre baddies in Karnov. The game has a certain weird and charming quasi-Gothic atmosphere to it, and the enemy roster is one major reason why. 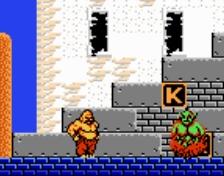 This guy (er, girl?) is strange as hell.

As a kid I found this first boss wildly fascinating. What’s that funky green thing he shoots at you anyway? And where’s it coming from? Hmmm, perhaps better not to know eh? 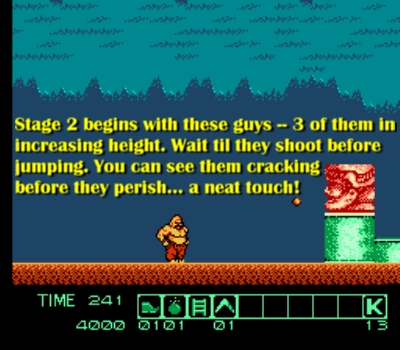 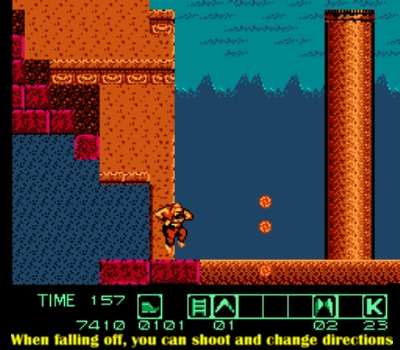 In an era where many action games felt hindered by rigid control, maneuvering the fiery Russian was a breath of fresh air. Rarely did I feel like blaming my failures in this game on the control. For a big guy, Karnov sure can move! 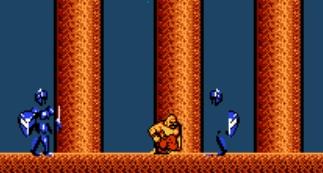 Duck and shoot rapidly left and right… Karnov can do it all.

This boss reminds me of Rowdain from Super Castlevania IV. I love the detail of the lion being green — the whole game just oozes an exotic, mythical atmosphere, as the box art suggested. Nice for a change that a cool box art did not deceive us!

You can either climb the tree or jump on it. The advantage of jumping is speed. You’ll get up a lot quicker and be less vulnerable. Sure, you can still fire while you’re climbing, but it’s safer to jump up it. I love when games give the player options. 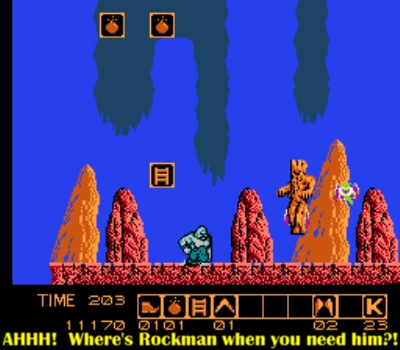 Luckily, these rockmen are a different shade from the other rocks, so you can easily distinguish when danger is imminent. BTW, maybe it’s just me but they remind me of the villains from Matango (AKA Attack of the Mushroom People).

Don’t underestimate these bastards. Thankfully, you can shoot down the rocks. 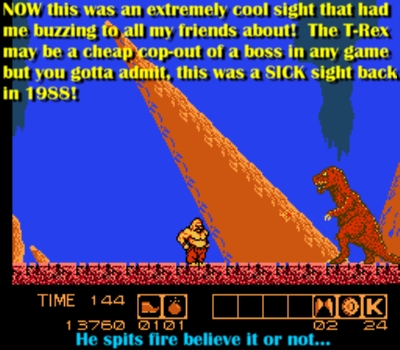 Ol’ T-Rex here may not seem so imposing NOW but that wasn’t the case over 30 years ago, at least not for me it was. I marveled at his size and his simple but effective design was truly memorable for its time.

Alright, I lied. Set up the ladder and hop on that little edge there. A red dot (Karnov’s power-up icon, if you need it) pops up conveniently, and the bombs will appear when you make your way across. It’s cool how they use the ladder to trigger secrets in this game. I remember how my brother and I gave each other a big hi-five like two geeks when we first discovered this secret over 30 years ago.

I thought the T-Rex boss in the last level was nasty… turns out I hadn’t seen SQUAT yet!

It lunges and moves in a way you wish it wouldn’t! This is what a terrifying and unsettling boss looks like. 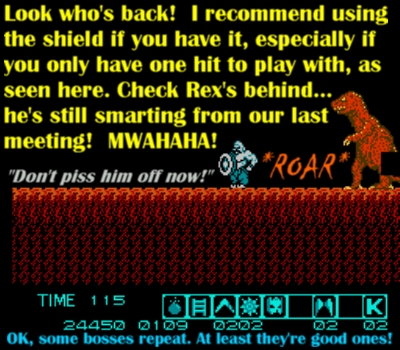 Thank God Karnov can’t lose those fancy trousers. We don’t need to see no Sir Arthur here, no siree. Instead he goes gray when he’s down to his last hit. 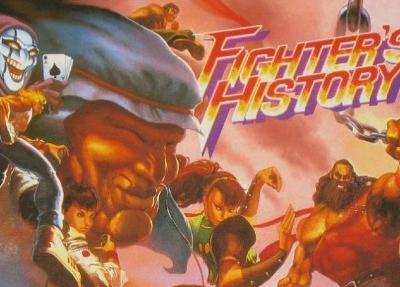 Back in 1993, during the golden days of the fighting game genre, Data East threw their name in the name they released Fighter’s History. The final boss of that game saw the return of Karnov. Fighter’s History is most well known for its lawsuit with Capcom. Capcom felt that Data East ripped off the “feel and spirit” of the almighty Street Fighter II. Capcom lost the case in court. Fighter’s History to this day remains a guilty pleasure of mine. 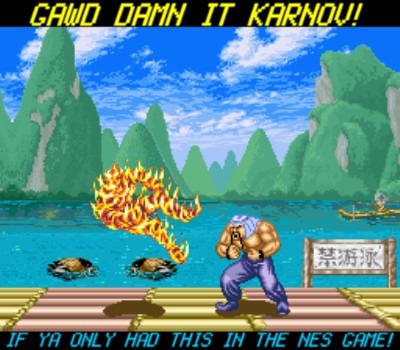 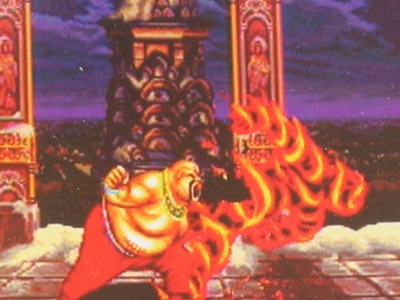 I enjoyed the sequel as well, though I prefer the original. Karnov’s Revenge, AKA Fighter’s History Dynamite, was actually the second Sega Saturn game I ever bought way back in June of 1999! Who knew a fat bald fire breathing pixelated Russian could bring such joy? 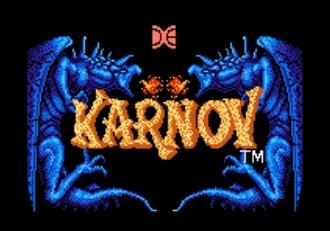 Back in the late ’80s to early ’90s, my brother and I only received at most 2-3 NES games a year. So the ones we did get we had to make sure would be worth it. Usually we relied on friends or on renting to determine if a game was worth owning. In the case of Karnov neither my brother or I had previously played it, or even heard of it. However, the art on the front and back had us sold. Going by such and only such usually spells disaster but thankfully Karnov didn’t disappoint. This game has sort of a Gothic atmosphere that is unlike many other NES games. Its various locales, strange enemies and bosses, not to mention its very distinctly middle Eastern musical styling, evokes a mythical almost goth-like air of mystery that permeates throughout the game’s nine levels. There are also multiple paths and plenty of secrets to encourage repeated play. Icons add further depth and strategy. Plus I always found myself pulled to the portly protagonist. There’s something about the bald Russian that is oddly appealing. It’s not a great game, but I find it to be rather solid and a notable effort in the vast 8-bit Nintendo library.