After beating Tales of Phantasia in February of 2013, I knew there was only one game that I could play next. And that was Tri-Ace’s SNES follow-up, STAR OCEAN. Just like Tales of Phantasia, Star Ocean clocks in at a hefty 48 MEGS. I guess Tri-Ace only does it big, eh? For years I had heard about what a great game this Star Ocean is. Some even say that Star Ocean is one of the best RPGs not only on the SNES but of the entire 16-bit era. After having a blast playing through Tales of Phantasia, let’s just say I had very high hopes for Star Ocean. Was it able to live up to the lofty hype? Well…

The topic of retro gaming prices has long been a hot topic of discussion (and frustration). The prices some of these old games commands, particularly the less common SNES titles, is downright scary. You want manuals and boxes, too? Then be prepared to give up an arm and a leg. Whenever I read about today’s astronomical prices, I’m reminded of how lucky I was to get back into the SNES scene when I did (January 17, 2006). Back then, you could easily secure 95% of SNES games, cart only, for no more than $40. Most, however, went for $10 and even as low as $5! The one game that did run me over $40 was Harvest Moon, and that came with the manual. $40 was always sort of my magical mark, and I managed to get games like Earthbound, Ninja Gaiden Trilogy, Aero Fighters and Castlevania: Dracula X for $40 or less. Good luck getting that deal today.

I say that all to say… I’ve been damn lucky in this hobby. So when it came to buying Star Ocean, I did something I thought I would never do. Star Ocean marked the first time in my life that I paid $100 for a video game. During my Saturn days, I prided myself on never breaking the $100 mark. I scored games like Radiant Silvergun, Panzer Dragoon Saga and even Psychic Assassin Taromaru all for under $100. The Star Ocean reproduction cartridge back in 2012 was hard to come by as very few people offered to make it. Supposedly, it was one of the more difficult reproduction cartridges to make. Therefore, they sold like hot cakes whenever they did pop up, and often at $100. With all the great bargains I’ve scored throughout my gaming career, I felt it was OK to splurge this one time and finally break the magical $100 mark. Of course, about three weeks after buying one for $100, people started marking down the price to $85. Go figure. Alas, what’s done is done. All I cared about now is whether the game was worth it or not. Let’s take a closer look, shall we? 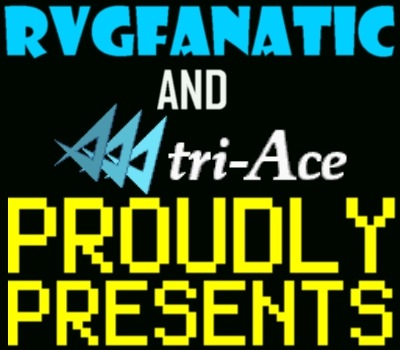 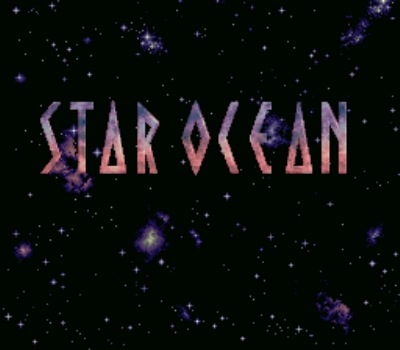 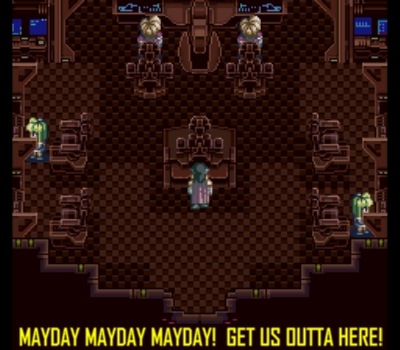 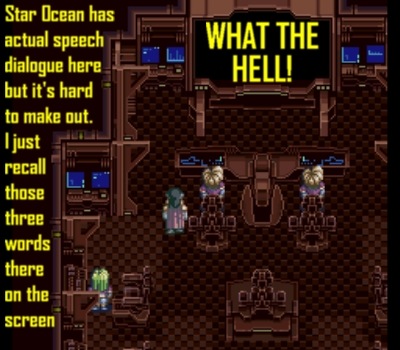 Milly: Classic Dorn, always talking a good game but never backing it up. Be a man for once and tell it straight to my face! Yeah, I thought so. PUNK ASS

Lackey 1: C’mon, let’s make the boss proud! Get down from there!

Lackey 2: Just because you’re Lackey 1 doesn’t make you the boss of me!

The battle system is different from other SNES RPGs but more on that later. 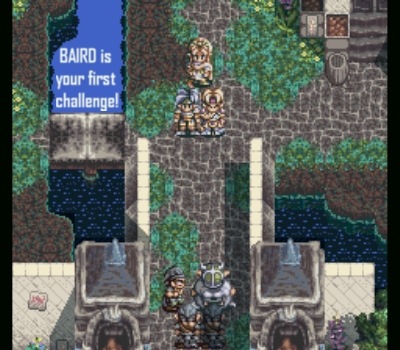 Baird: So you are the mighty group that will take our empire down? HA! Don’t make me laugh.

Steve: How about we make your tombstone instead?

Dorn: Steve, please leave the trash talking to me…

Baird: HEY! What is this, comedy hour? Prepare to meet your DOOM!

Milly: Uh boys, how about we NOT agitate the big bad ugly guy? 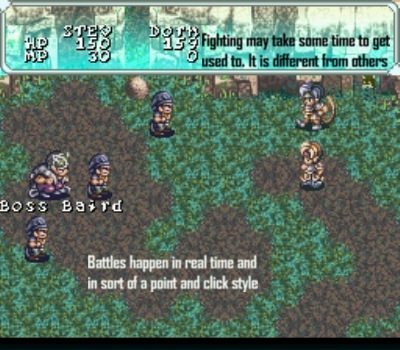 It took me a while to get used to the battle system. First you have to press A, which makes arrow symbols pop up. Then you select the bad guy you wish to target. Hit A again for your main hero to strike. Part of me can’t help but wonder what if they just used a Legend of Zelda: Link to the Past control scheme instead… 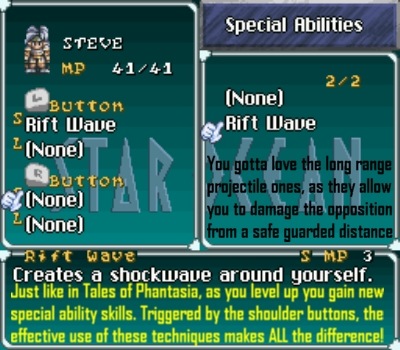 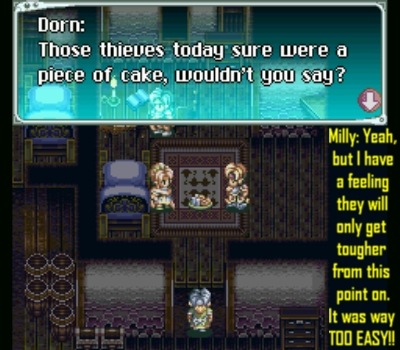 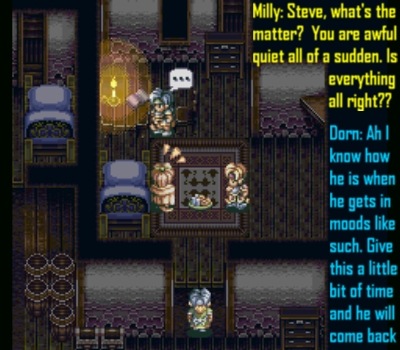 Instead of the typical world map you get in most RPGs, you travel across pathways like this one. As you can imagine, the world is much smaller and more compact than your average 16-bit RPG. It took me a while to adjust. But it somehow works for this game.

The first special skill earned is the Rift Wave. It creates a shock wave around you, granting you temporary protection while damaging any unlucky fool standing in its way. Effective mastery of these special skills is crucial to your success.

Milly: Where were you?

Steve: I was at the beach.

Dorn: Ha! Disease?! Who, me? You so FUN-NAY, Steve… *coughs violently*

They have no choice but to scale Mount Metox. They’ll risk life and limb in order to find the cure. 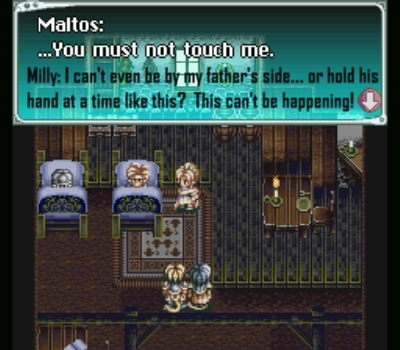 Maltos: Is that Steve and Dorn over there?

Maltos: Please come closer so I can get a better look.

Milly: What happened to respecting a dying man’s last wish?!

Later on, Milly and Dorn have a little moment in the moonlight. It is then that Dorn crumples over out of pain and discomfort, sending Milly to run off to find her man, Steve. Hey, I’m liking this story… 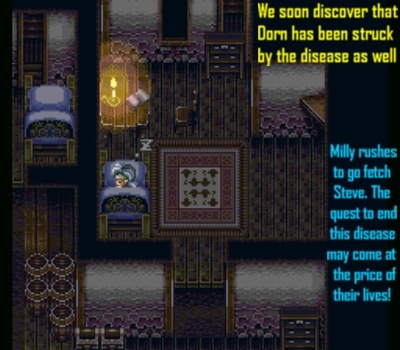 So you not only have to save Milly’s dad, Maltos, but now also your best friend, Dorn. After scaling to the top of Mount Metox, you’ll run into some Federation folks from the future. It’s a quest to save the world from a grand intergalactic war. No pressure, eh? 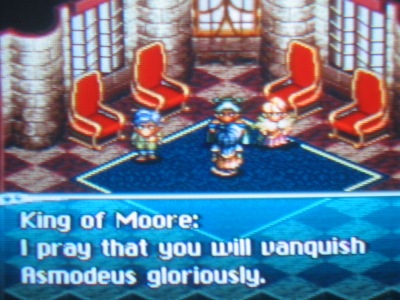 Along the way you’ll meet different kings asking you for favors. A lot of the king scenes appear in this isometric fashion, which is highly reminiscent of Super Mario RPG: Legend of the Seven Stars.

Of course, you won’t have to go at it alone. There are a bevy of characters to recruit. And deciding which ones to take on is all part of the strategy and fun.

Pretty soon you’ll be such a hit that you’ll have your very own groupie.

Star Ocean hands down has the best looking castle entrance of any 16-bit RPG. I dare you to name one finer. It looks epic in scale and I love how you can see birds flying by overhead.

Indeed a lot can happen. Customize your party depending on certain actions you take or don’t take. You gain skill points each time you level up. These points can then be allocated to many different skill categories such as knowledge, sense and technique. There’s plenty to do, from compounding items to smithing weapons — the insane amount of choices may be daunting to a newbie. 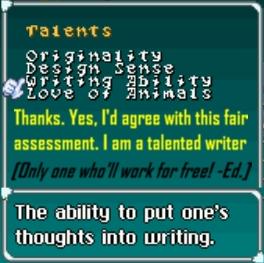 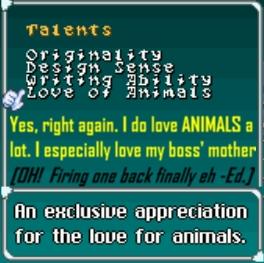 Where will you allocate points to?
Choices, choices…

The status screen is loaded with information. Heck, it even tells you their favorite food! 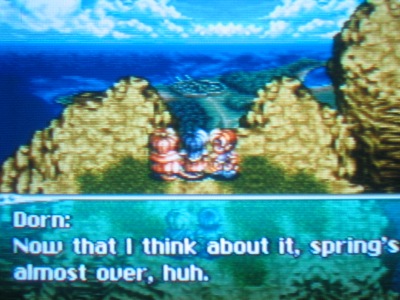 There are a total of 12 characters; you can have eight at any given time. Only four will fight, however. You can switch from any of the four in battle, although it’s cumbersome to do so. You can also adjust computer AI tendencies but much like Tales of Phantasia, it has its limits. I felt some of the characters were a little flat, which was disappointing. Star Ocean didn’t quite hook me in the way that Tales of Phantasia did.

Another unique feature is the ability to enter towns apart from the rest of your party. Doing so will lead to a cutscene with special actions taking place that you would not be able to see or produce otherwise. It’s brilliant for character development and extending the game’s longevity if you’re the type to turn over every last leaf. Pure old school RPGers, on the other hand, may feel slightly overwhelmed. There is certainly no shortage of things to see and do in this game. 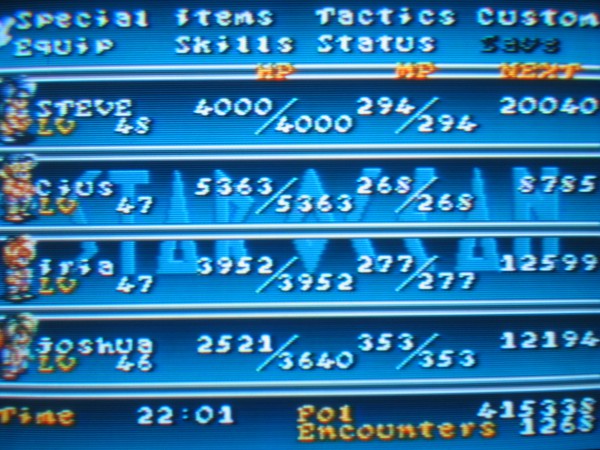 Read on to find out, although I think you already know…

As you can see, opinions vary wildly on Star Ocean. While some claim it’s the best thing since sliced bread and even better than the likes of Chrono Trigger or Final Fantasy III, there are many others who will contest it’s full of great ideas BUT the execution leaves a bit to be desired. Obviously, your mileage may vary.

After finishing Tales of Phantasia, I knew there was no better game to play next than Star Ocean. The two Tri-Ace RPGs share a few things in common while being vastly different at the same time. There’s a lot more to do in Star Ocean, in terms of innovative new quirks such as the Private Action system, skill points and the ability to recruit several allies. Tales of Phantasia is much simpler by comparison. The visuals in Star Ocean are stunningly detailed and brilliant, from footprint tracks in the sand to curtains flapping on a windy day. The voiceovers are an elegant touch and the music is even better than that of Tales of Phantasia. The battle system is not as fun, though. The fighting is fast and furious but a control scheme akin to Link to the Past would have been preferred. Instead, we got a tap-tap fest that’s just not as smooth or intuitive.

It’s difficult not to compare Tri-Ace’s two SNES RPGs. I prefer Tales of Phantasia by a comfortable margin. Tales has a more interesting game world, I connected better with its characters and the overall experience was simply more enjoyable and memorable. While I enjoyed my time playing Star Ocean, it left my mind as soon as I completed it. By comparison, Tales of Phantasia left a lasting impression long after completion. I appreciate Tri-Ace experimenting with Star Ocean — there’s the Private Action system, skill points, recruiting characters, a cast of 12 and a party of eight — but sometimes less is more. As crazy as it may sound, perhaps the game gave you too much to do. None of it felt fully fleshed out and more like they went 80% with each idea, which ends up diluting the experience a bit. Personally, I love the pure simplicity that backs Tales of Phantasia. Star Ocean is definitely a good RPG but I can’t call it great. It’s undoubtedly full of great ideas but the execution is “only” good at best. That still puts it in a fairly strong class but it’s not quite in the upper echelon of epic SNES RPGs. Star Ocean is one of those weird games that is both good and slightly disappointing all at once.