On September 7, 2006, I acquired a cart only version of Rendering Ranger: R2 for a “measly” 90 dollars. I say measly because today, more than 10 years later, a cartridge only copy goes for well over $500. In fact, there is a copy on eBay right now with a Buy It Now of $950, damn. A boxed copy goes in the thousands. Why? This game is really rare. In fact, the R2 might not stand for Rendering Ranger but rather “really rare.” Rumor has it there were only a few thousand copies released.

Rendering Ranger was developed by a man named Manfred Trenz (Turrican creator). R2 originally started out as a pure horizontal space shooter. Some time during development they worked in run ‘n gun stages due to the popularity of the genre. They felt a pure space shooter wouldn’t sell real well. R2 is a mixture of Contra (or Turrican) and R-Type. The game was in development for nearly 3 years.

It’s a visual tour-de-force. “This is the Super Nintendo?!” was my reaction multiple times. In certain sections I even thought, “You could pass this for a Sega Saturn title!” Even when the screen is swarmed with countless sprites, there’s no slowdown… none!

Let’s take a closer look at the action. 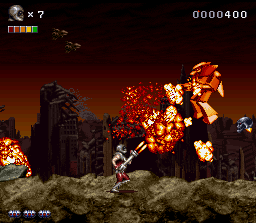 Lots of planes and debris zip by in the background. Mid-way through a huge plane crashes in Mode 7, destroying half the tracks. These flying foot soldiers make up the bulk of the enemy line in level one. It’s fun to watch them flash before exploding. 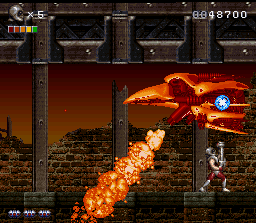 Stay underneath and away from the flaming pod. These suckers sure take a licking. 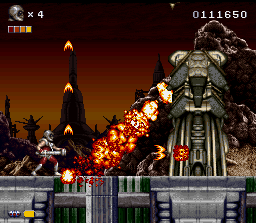 A quick jaunt outside before entering the enemy base. 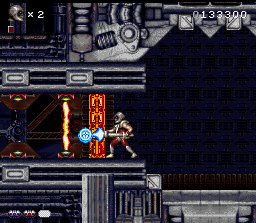 Take the lift down. As you descend, flames and drillers attack. Make your way deeper in the base. Doors fall down (reminds me of the classic HANGAR stage in NES Contra). Blow ‘em up. Stationary machines hang from the ceilings and threaten with their deadly flame throwers. No boss here. Board the space ship… 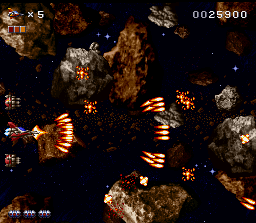 Enter the giant asteroid field and mow down anything that moves. Be careful — the big ones segment into four smaller pieces when shot at.

This guy has two forms, the bugger! There’s one of your bomb options on display. I like this particular one because of the wide range it covers.

Trekking deeper in the outer reaches of space, there’s no turning back now. To call the graphics here “mind blowing” would be a gross understatement. My goodness… this is the *16-BIT* Super Nintendo, right?

Huge fleets of ships attack at all times. You really have to see it running to comprehend how amazingly fluid this game moves, without a hint of slowdown in sight. It’s truly remarkable! 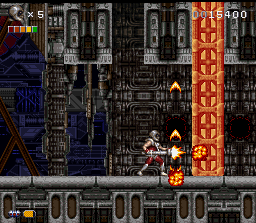 After a spirited battle in the air we’re back at it on foot. More doors await to be blown to bits. There’s something oddly satisfying about the flashing effect. It takes me back to the good ol’ 8-bit NES era. Rocksteady from TMNT II, anyone? 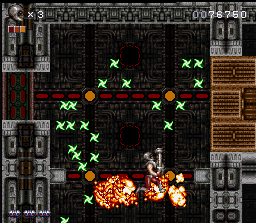 This particular gun works extremely well in tight confined spaces such as this. 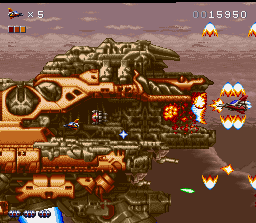 Back to those so-called “friendly” skies. Intimidating fortresses must be dissected section by section. Stage 6 really reminds me an awful lot of SENGOKU BLADE (Sega Saturn). 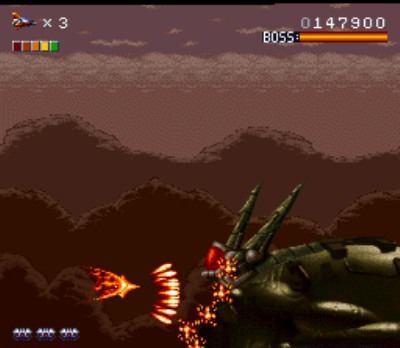 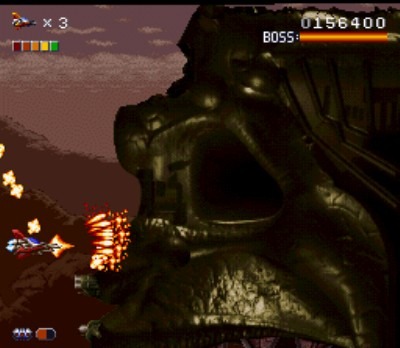 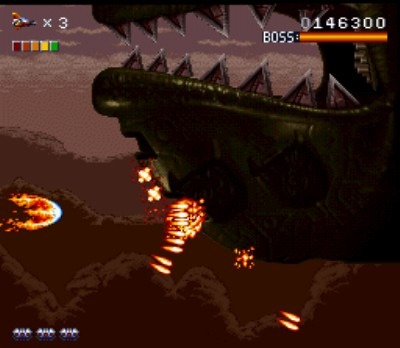 Best stage intro ever. An ominous swirly almost mirage-like image of a gargantuan crimson demon skull fades in and out… foreshadowing? My lips are sealed…

This dip from outer space to the metropolitan city at night is mind-blowing. “This is the Super Nintendo!?” rang through my head for the umpteenth time.

This is where the game decides to knock you down, kick you, then point and laugh. An evil descent sends you through a lengthy force-scrolling section with VERY tight turns and small openings. 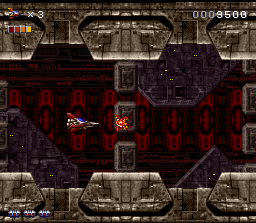 IT SCROLLS REALLY FAST. Even the most clairvoyant gamer will find himself at the Game Over screen in no time. Those stones make matters even worse — if you have weak guns fudgetabudit. Suffice it to say…. GOOD LUCK!

The first stage is kind of dull, but it really picks up after that. It’s not a masterpiece (sans graphically of course) but it’s very playable and the bosses are great fun to dismantle bit by bit. The password feature is nice since the levels are REALLY long. Mostly thanks to the fact that some of the bosses take FOREVER to kill. Only you can answer the question for yourself whether this game is worth the enormous price tag or not. It’s impressive to watch this game in motion. Zero slowdown as dozens and dozens of sprites are flying your way at breakneck speed. All in all, Rendering Ranger is a solid game but definitely geared toward collectors. I appreciate the effort to split this game into two different genres, but there are better run and gun games and better SHMUPS on the SNES than what you get here. At the price it commands you might be a little disappointed that it doesn’t cook breakfast! Or at the very least, be in the upper echelon of Super Nintendo gaming.