I was blessed with a great childhood, full of rich memories. But if I could go back and change two things however, I would have: 1. owned a puppy and 2. went to Disneyland. Yeah, I never went to Disneyland as a youth. I missed out on the “Happiest Place on Earth” [Sure, tell that to the Pink Poodle -Ed.]. It wasn’t until my senior year in high school… SENIOR GRAD NIGHT. For the fee of $100 per person, we had the park closed off to the Class of 2001 from midnight to 6 AM — it was ours to run… and ours to rule *maniacal laughter*

My friends and I immediately hitched on the first ride we could — the Pirates of the Caribbean. I can still remember vividly going under the cave for the first time… that WHOOSH sound echoing through the crisp cool night air as the darkness devoured us all. Awesome.

I remember the park being lit up… the dance room bumping with carefree to-be high school graduates… the free food… all the rides you could go on. By 4:30 AM many couples were passed out on the benches. But not my group… no, we were wide awake and determined to squeeze the park for all it was worth.

This next game definitely brings back memories of that night. It’s not by Capcom, but GRC, makers of the Genesis cult favorite Trouble Shooter. Despite less-than-stellar control which makes the game harder than it should be, Mickey Tokyo Disneyland is a nice little platformer featuring a timeless icon.

In order to rescue his friends captured by the evil Pete, Mickey must conquer each section of the park. Pete guards the end of each section, and in between there’s all manner of traps and minions to thwart your progress. 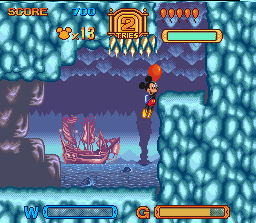 Water balloons good. The standard kind is flicked horizontally and, if you hold the button down, can be made bigger. The other kind is heaved upward, or if held down will send Mickey in the air. A decreasing meter indicates how long until the balloon pops. 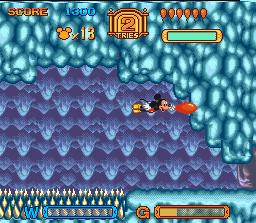 While in mid-air, press forward and Mickey will be shot in said direction. In certain areas this is mandatory. You can even do a diagonal downward/upward dive.

Hold Y and kneel down. Mickey will set a water balloon on the ground. From here he can jump off it for an added boost. Or use it to create a weight Indiana Jones style!

Or it can be used to pick off enemies below. Sweet. I love it when games allow items to serve multiple purposes

Alright, a quick look at some of the levels below.

The first stage is basic and eases you in. The look of the game immediately reeled me in. I like Mickey’s representation; it’s much more traditional Mickey than seen in the Capcom games.

Absolutely gorgeous. But before you can enjoy it for long the treasure chests (all but one) come alive.

You can almost take it all in, can’t cha? OK, maybe just me, then. 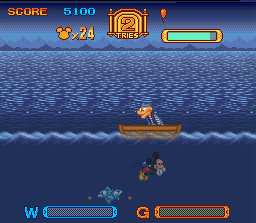 This bastard tosses food in the water to attract the biting fish as you swim by. 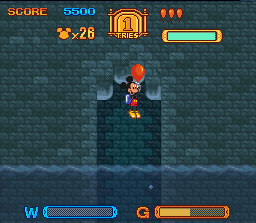 Like Sonic, you’ll need to come up for a breather. Here’s a nice spot to do that. 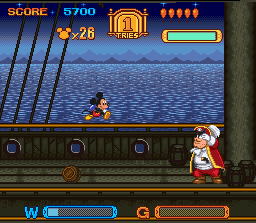 Jump over the barrels and spray him. Wait, that came out kinda wrong. 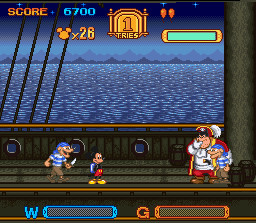 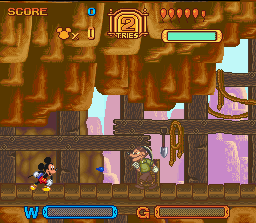 Usually brown is a bland color in games but GRC made it look exceptional here. 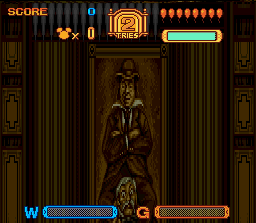 It’s just like you’re at Disneyland… if there were evil monks running around trying to kill you, that is.

This spooky ghost face greets you early on in level 6. It’s an easy sitting target though with no attacks, so it’s simply there for decoration. I love these little festive touches. Really brings a game to life when I see little details like such.

I had quite a bit of fun with Mickey Tokyo Disneyland. I liked how they incorporated the theme park into the game’s stages. Although Mickey is a bit rigid on the controls, I had a blast making my way through the dark side of Disneyland. It’s definitely not as good as the Capcom Mickey games, but it’s a decent alternative when you’re in the mood to dispose of bad guys via water balloons rather than blocks. Put it this way, I’m glad all these different variations of Mickey games exist on the SNES — you can’t go far wrong with any of them.

I must warn you though. Remember how easy the Capcom Mickey games were? Not the case here. Thankfully, Mickey is not a one hit wonder. On easy you have 8 health bars (in the form of balloons), medium 5 and hard 3. The control may cramp your style but it can be worked around, and if you’re looking for a Mickey game that is challenging for a change, this one does the job. Perfectly suitable game to kill a couple hours with on those dark Fall rainy Sunday afternoons!