Back in 2006, when I repurchased a Super Nintendo and began my SNES resurrection, there were three Super Famicom platformers I was insanely curious about. I referred to them as the Big Three. It was DoReMi Fantasy, Majyuuou (AKA King of Demons) and Magical Pop’n. I was blessed enough to find a loose cartridge copy for just $25 (September 18, 2006). The game as you can imagine currently commands an arm and a leg. Timing is everything, eh?

Magical Pop’n is a platformer with traits that are more or less reminiscent of timeless classics like Metroid, Zelda, Castlevania, Mega Man, etc. Your main weapon is a sword. Sub weapons, each requiring a certain amount of stars per use, are available as well.

Here’s a look at the game’s first two levels. 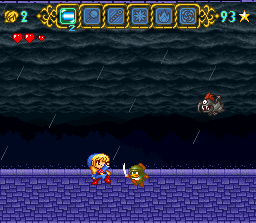 Sensing something foul in Denmark, your quest begins atop this roof on a dark, rainy night. 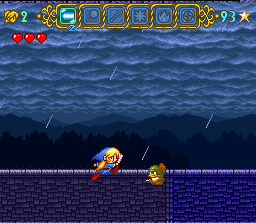 A stroke of lightning reveals in the distance endless and ominous-looking hills. 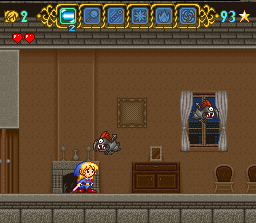 Escape the frightful weather by way of chimney. Unfortunately for you, danger aplenty still lurks. 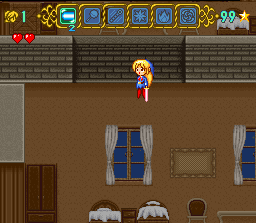 A healthy boost sends you sky high to the next floor. 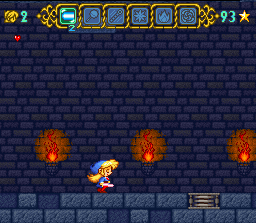 As you navigate the mansion you uncover creepy dungeons.

Your first mid-boss encounter comes with this occult heathen. 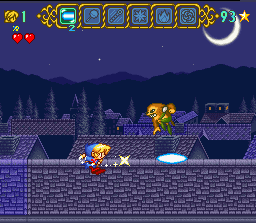 After the mid-boss tangle, this dirty little goblin attempts to impede your expedition. 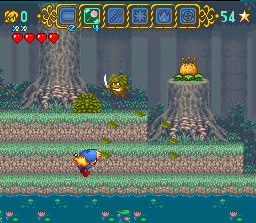 Level two takes place in the woods… on the surface, at least…

Our heroine enters a dank cave filled with critters of all shapes and sizes. 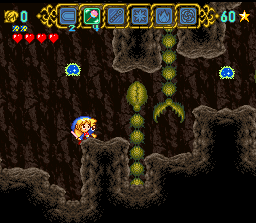 To meet the mid-boss of the cave and claim your next sub weapon, you must cross this bit.

Now you may claim your Bionic Commando-like extension grappler. Therein lies the beauty of Magical Pop’n. Each new sub weapon allows our female protagonist added firepower in her quest. 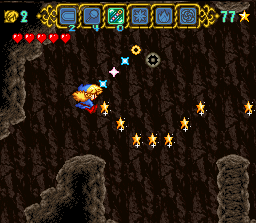 The grappler can be used an unlimited amount of times as it eats up zero stars, but it’s strictly used for swinging purposes. It certainly adds a hint of Bionic Commando to the proceedings, which isn’t a bad thing at all.

Magical Pop’n isn’t quite the 9+ out of 10 game I was hoping for, but it’s still very good. It presents a fairly decent challenge to boot. The game features six stages. Unfortunately there is no save/password system. Fortunately there is a debug menu cheat code that negates this. Pause the game and press Up, Down, X, Y, Left, Right, A, B, Up, Up. Unpause the game and it will activate the debug menu where you can tinker with lives, stars, the almighty God mode and a very handy level select. Gotta love codes like such! They go a long way in enhancing my enjoyment of a game as well as increase longevity.

Of the Big Three, DoReMi Fantasy is light years ahead, but I’d rank Magical Pop’n a respectable second place and Majyuuou a very close third. Having said that, Magical Pop’n is a fine platformer that conjures memories of classic franchises. It never reaches the level of greatness as those classic games, but coming from an obscure developer who only has four titles to their name (Polestar), this is an admirable effort. It probably isn’t worth the insane amount it goes for, but it’s certainly a noteworthy and memorable Super Famicom-exclusive title. Just don’t expect it to be the best thing since sliced bread.