The beat ‘em up genre is one of my all-time favorites. There’s something pure and satisfying about walking along, smashing bad guys and looking really macho while doing it. The SNES received its fair share of solid beat ‘em ups. To name just a few, Teenage Mutant Ninja Turtles IV: Turtles In Time, King of Dragons and Final Fight 3. But the best Super Famicom brawler to never leave Japan is hands down Ghost Chaser Densei. If you enjoy the genre and own a Super Nintendo, there’s really no excuse not to have this in your collection.

On a side note, it’s funny — the preview mentions ghosts and spirits and the title has “ghost” in it, yet the game is seriously lacking any sort of ghoulish atmosphere. No biggie, but worth mentioning. I would have liked to seen a more macabre setting or tone.

Select from 1 of 3 characters — the well-balanced male, the strong robot or the quick token female. In most of these games I prefer the strong dude, but the main guy here is actually quite a hoot. What makes Ghost Chaser Densei different is the power meter system. Below your energy bar is another bar that depletes any time you perform a special move. But your health meter is not compromised in exchange! I wish more games from this genre would use this feature.

The power meter slowly regenerates, but if you stand still you strike this pose here and the power meter recharges at quite an alarming rate. So, if you ever wished that a beat ‘em up would allow you to do 360° spinning specials without penalizing your health, you will LOVE Ghost Chaser Densei. Some may call this system cheap, I call it lots of fun! Plus, there are MULTIPLE special moves at your disposal, giving this game far more range than others from the genre. 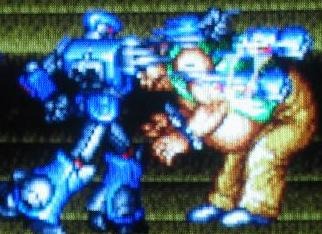 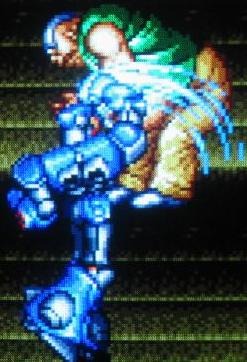 It culminates in this lovely and devastating uppercut swing! 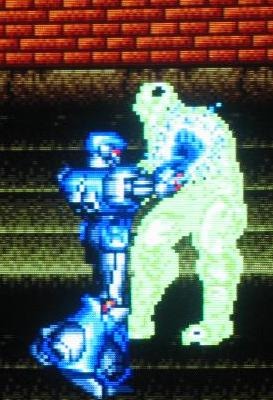 In a grapple? With Mr. Roboto you can either do a regular jumping pile driver or hit “R” for his special move — it really shocks the competition. 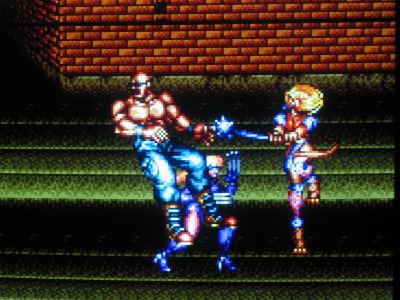 In a tight pinch? Merely hit “R” for the swing-around  special! As long as your special meter has some juice, you’re good to go! Your health won’t be reduced. 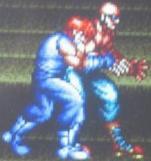 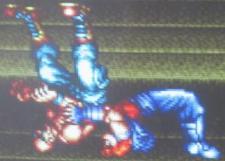 The main character is the best choice. Knee ‘em twice, flip over and german suplex their ass! Streets of Rage you say? Hey, I never said the game was ORIGINAL — just loads of fun!

It has the potential to connect multiple times, charring the victims to a crisp!

How many beat ‘em ups do you know that has blocking? This game’s got the lot!

Some roll out in eggs before hatching. One breed emits electricity. Fairly tough bastards they are. Hmmm, I’m starting to detect a real serious Street Fighter II vibe now…

These tough blokes are, as you might guess, the Andore of Ghost Chaser Densei. 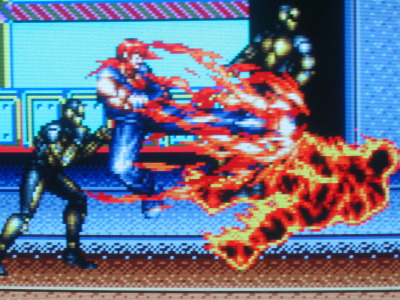 War knights are nimble and hardened warriors trained to maim. Nothing that the flame kick can’t take care of, though!

Some enemy  entrances are memorable, like the eggs and this fella here.

And of course, you have your low tier chaps and the ol’ token female.

Nothing beats a good ol’ knife to the shin. 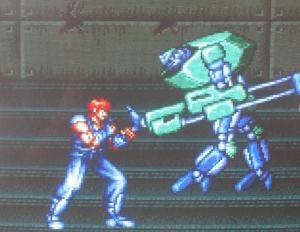 The good news? The first boss isn’t much difficult at all. The bad news? It becomes a regular enemy after stage one. Rats.

Ghost Chaser Densei is a top-notch beat ‘em up. Sure, it’s quite derivative in many ways: enemies, stages, the heroes, etc. But there are touches that help make it stand out. This includes the separate special move meter, the ability to block, and yes, even tag team special moves! Hell, when you’re knocked down, you even kip-up and take out whoever is in your way! Now that’s cool. It’s a shame that this game is still somewhat obscure within the SNES community. The move set is larger than the average beat ‘em up which makes it a blast to play. Definitely worth buying! After all, sometimes you’re just in the mood for a brawler from the halcyon days.