In 1991, Capcom released two medieval-related beat ‘em ups. One was called Knights of the Round and the other, King of Dragons. Interestingly enough, Capcom released both games on the SNES some three years later in 1994 and in the same month no less. It was a bit unusual to see such late conversions — usually ports were handled within two years if not one — but boy am I glad that didn’t stop Capcom. While naturally there were quite a few sacrifices made, namely going from three player co-op to two, reduced sprite size and less enemies on screen, back in the ’90s these home ports were the best we could do at the time and we always made the most out of it. Some conversions were handled better than others, and thankfully, King of Dragons can be considered as a fairly faithful translation of its 1991 original. So if you’re into fantasy beasts (such as Wyverns, Cyclops and Minotaurs) and you enjoy medieval warfare with a decidedly Dungeons & Dragons fare, then you’ll find yourself right at home. 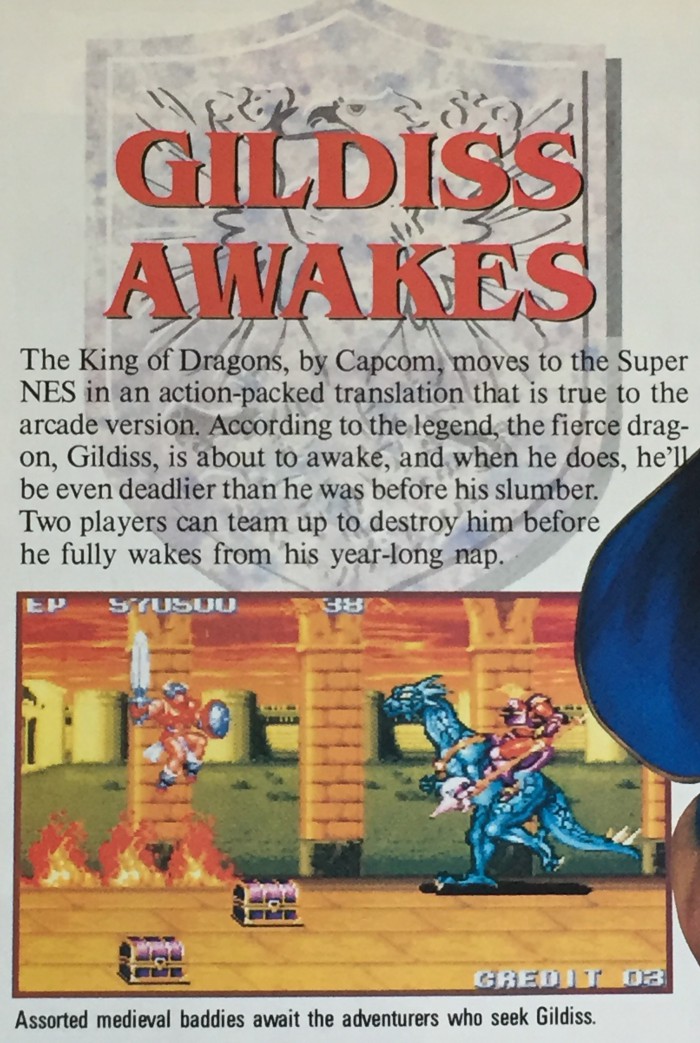 Not exactly the most riveting or original plot, but hey, who plays beat ‘em ups for their storyline? I sure as hell don’t! Give me a big sword, some nasty bad guys to kill and watch me grin from ear to ear as I wipe the floor with the lot of them! 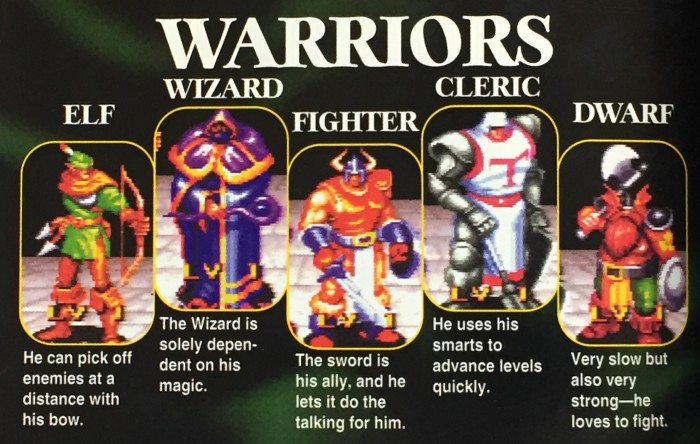 One of the best features about King of Dragons is the five different characters you can select from. Very few SNES beat ‘em ups gave you five choices. Most offer the standard three and four was considered to be great. But you get five here. Best of all, they all play differently and not just in a few categories. They all have their pros and cons in terms of attack range, magic power, defense, speed and so on. Three of them can even block enemy attacks. There’s a lot more strategy found here than in most other beat ‘em ups. It also makes the 2 player mode all that more interesting because you can strategically pair up an Elf with a Fighter for instance. The Elf attacks from long range while the Fighter handles the up close encounters. 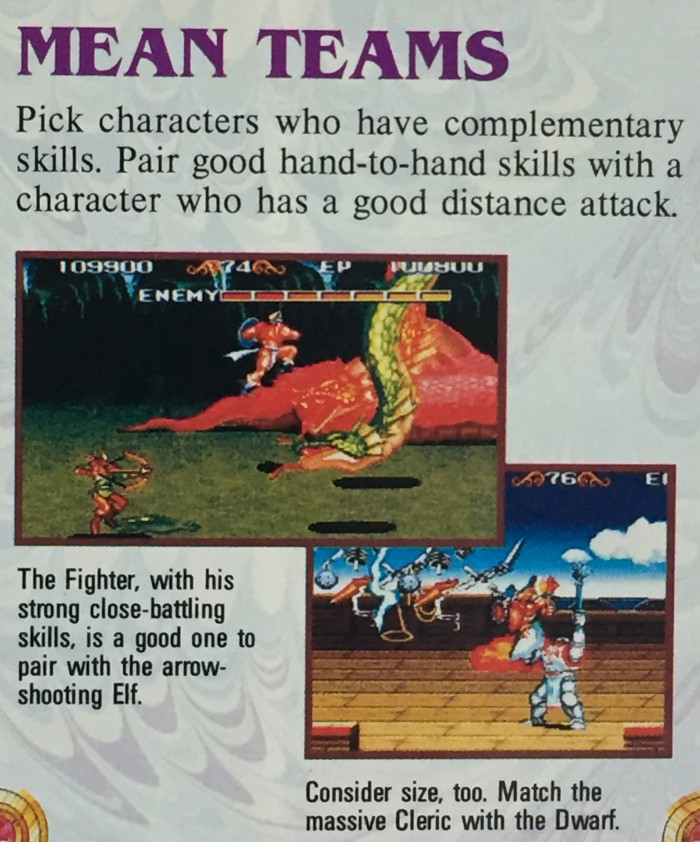 It truly does as you and a friend can mix and match. I recently played this with my girlfriend and she likes being the Elf. Unfortunately, continues are shared in the 2 player mode. Bummer. (But there is a 99 continue code floating out there…) 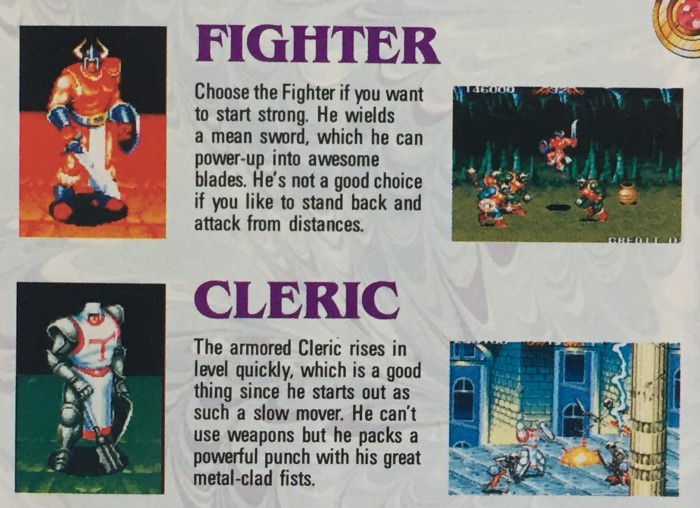 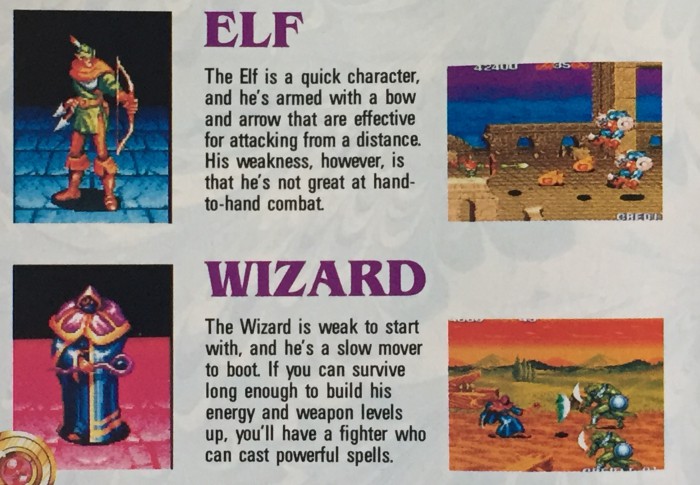 Credit Nintendo Power Magazine (issue #60, May 1994) for their excellent coverage above. I miss when gaming magazines were so lovingly crafted and fun to read. 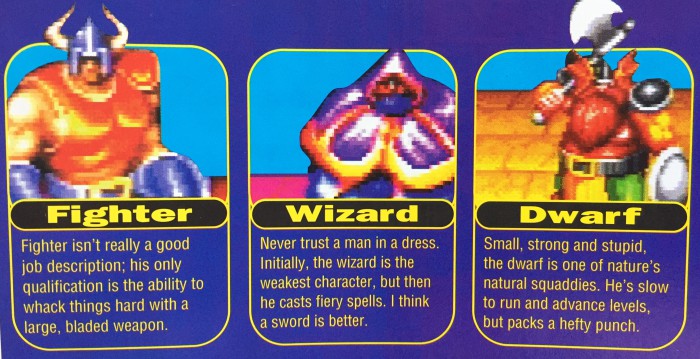 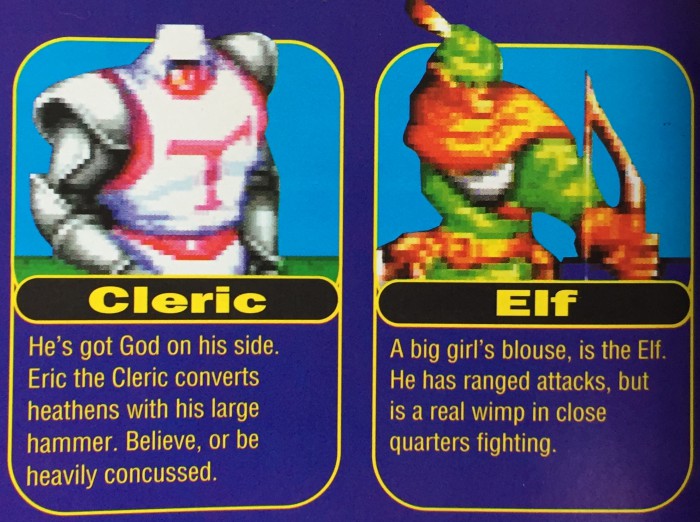 Credit Super Play Magazine (issue #20, June 1994) for their more humorous coverage above. They always had that cheeky sense of humor, them silly Super Play lads.

This increases your strength and defense. Most beat ‘em ups don’t allow for your character to level up, so this is a welcomed change to the norm.

Some spit out harmful blobs of goo but the worst is a magical spray that will freeze and quickly sap your health if touched. Stay on your toes!

I love that you can strategically preserve magic orbs. Sometimes instead of striking an orb right away, it’s prudent to kill the weaker enemies currently on screen and then bounce the orb to the next section, saving it for tougher enemies. Sweet.

You can bounce orbs along for a good while before they start to flash. Once flashing, better strike the orb to activate it or you’ll risk losing out.

Mummies are slow and lumbering but they inflict tons of pain if they catch you. This is where the Wizard or Elf comes in real handy with their long distance strikes.

Skeletons are a real pain in the ass. Not only are they tough, but they’re nimble enough to cause a headache as they prance about the screen in a creepy reanimated sort of way.

King of Dragons is not too hard once you get the hang of the characters’ strengths and weaknesses. It’s certainly beatable but you’ll definitely want to seek out these precious extra continues hidden throughout the game. 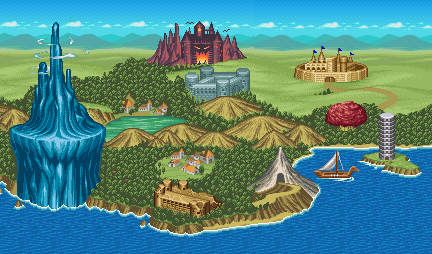 There are 16 levels in all, but some are insanely short. One stage doesn’t even have a boss. The stages are named which I found to be a nice touch. I’m a sucker for that sort of stuff even though some are incredibly simple. “To The Castle” followed by “In The Castle” — I wonder how long it took Capcom to think of that? But a few are pretty cool such as “A Giant In The Shrine.” The game takes you on quite the journey, ranging from a spider-infested forest to boarding a Norse ship. 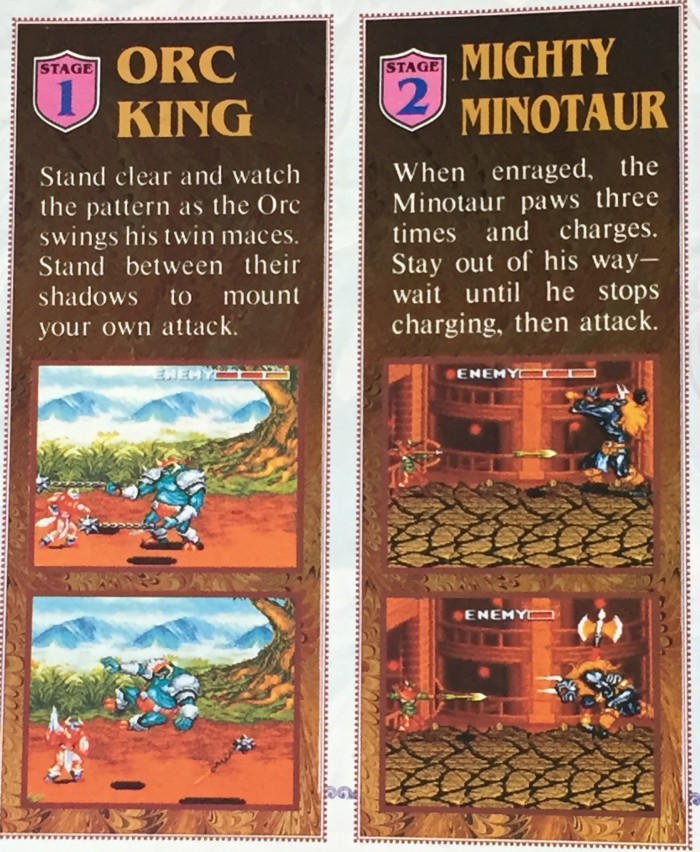 The Orc King attacks with two morning stars. Watch his shadow and stay in the middle. Halfway through the Minotaur fight the ground breaks, sending the two of you descending to the floor below. Nice. 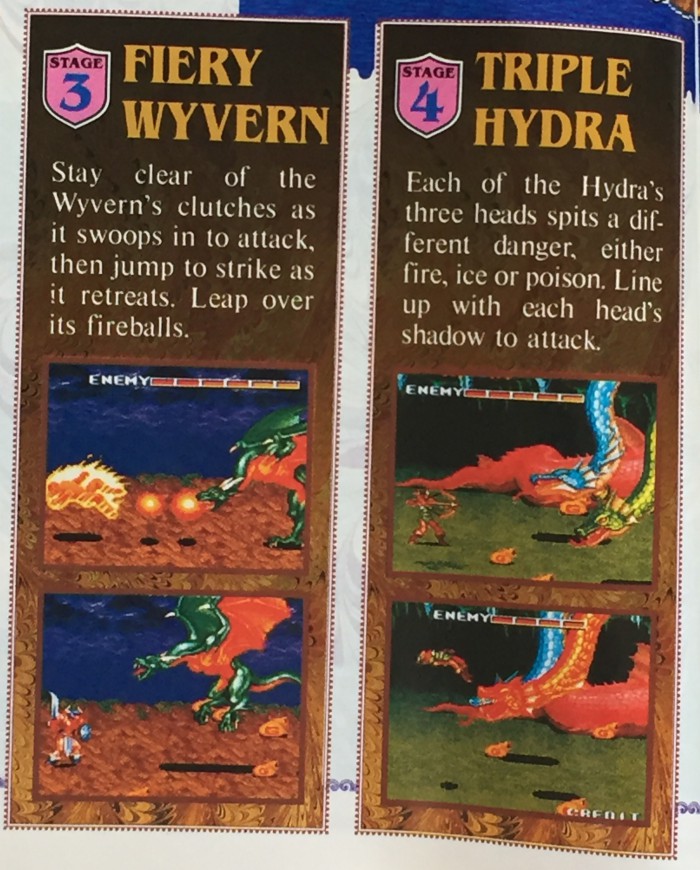 Another nice thing about this game is the diversity of the bosses. Sometimes you fight giant bipedal monsters. Other times you find yourself battling winged behemoths and three headed dragons. The strong fantasy setting takes you to a completely different realm from most other beat ‘em ups. Forget ye standard thugs and goons — it’s all about mythical beasts! 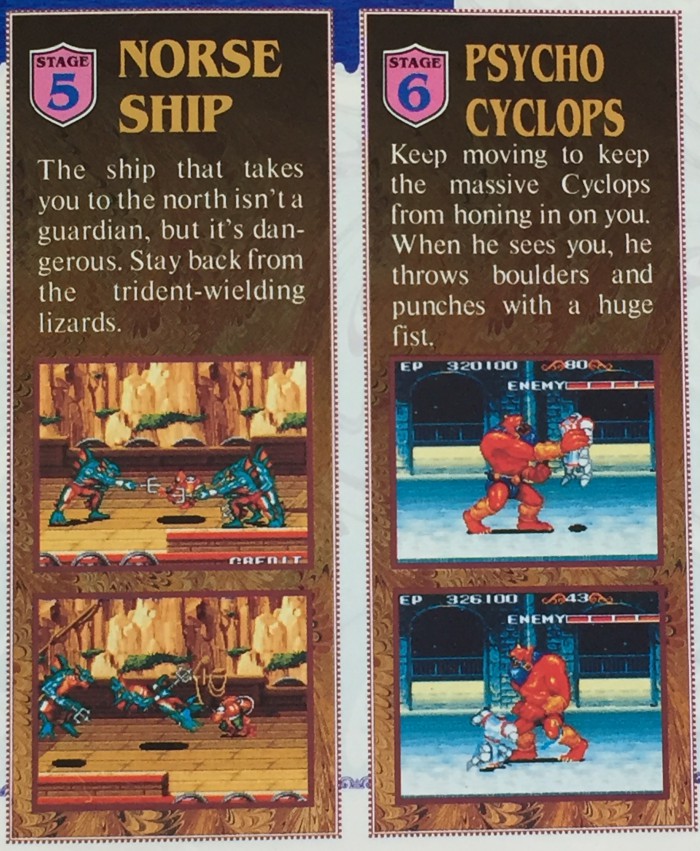 Stage 5 actually has no boss. I love the Cyclops in stage 6. It’s got such a simple great look and is the first thing I think of when I think King of Dragons.

If you hate spiders like I do, then you’ll LOVE the giant spiders in stage 7. The creepy bastards make my skin crawl. Watch out for the Great D’s big stick… 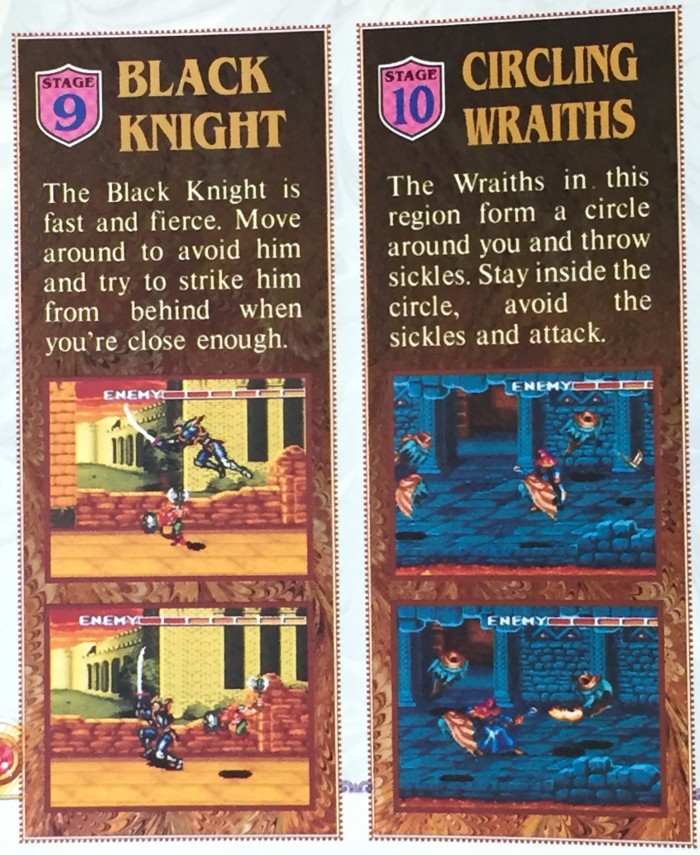 The diversity of the boss fights continue to shine. Battle a nimble Black Knight in stage 9. Take on a circling crew of phantoms at the end of stage 10. And while the graphics aren’t great per se, you can see the diversity there as well.

Indeed. And now you know where Goldar came from. The Royal Knights are reminiscent of the Black Knight, except now there’s two of them. Lucky you. 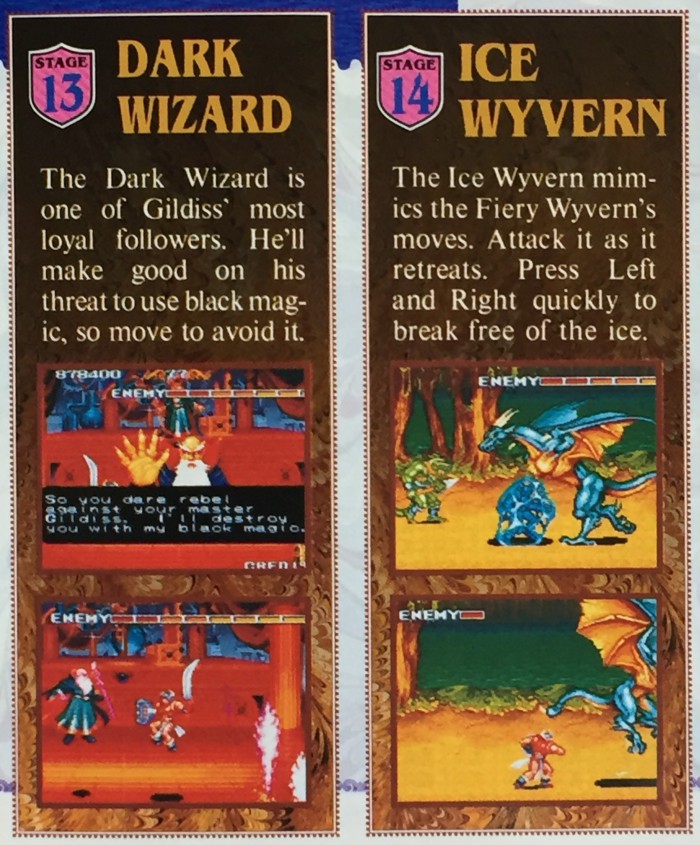 “We must do with the time that is given to us.” Once eloquently stated by the Dark Wizard. Or Gandalf, rather. He’s a fun boss fight. Unfortunately the same cannot be said for stage 14 which sees a lazy repeat of the boss from stage 3. Sure, one is fiery while the other is ice. Still, come on now, Capcom. Then again, coming from them (the masters of milking), are you surprised? 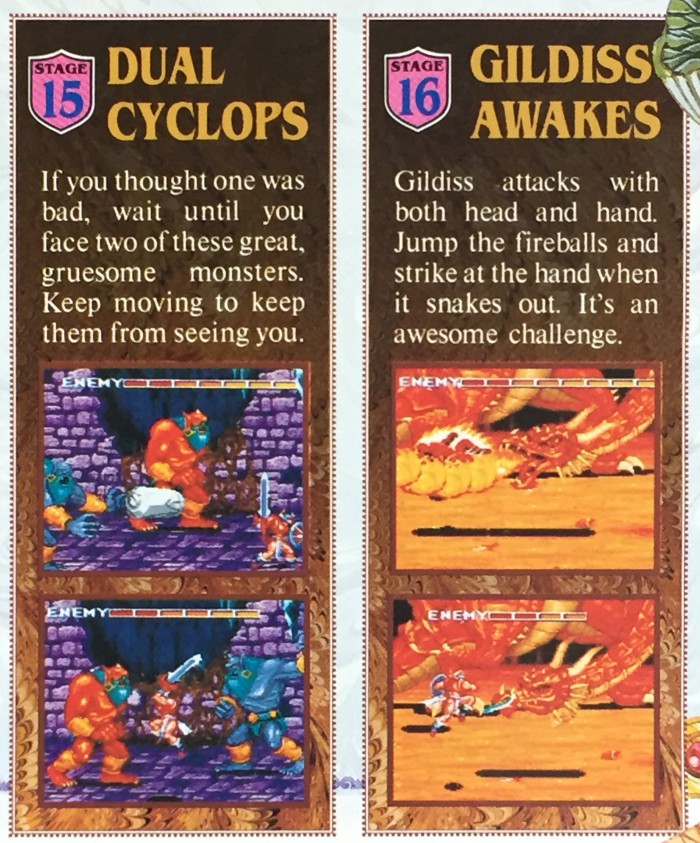 Capcom heard our cries loud and clear. So what do we get for it? TWO Cyclops at the end of stage 15! The last boss, Gildiss, is not only the hardest boss of the game but really the one boss that will give you any trouble.

As you can see, some bosses more or less repeat. Take these two dragons for instance. Fire and ice. Not so nice. But the occasional “lazy” boss is forgivable considering the overall number of levels which far exceeds that of most other beat ‘em ups from the ’90s. So I can give Capcom a pass here. 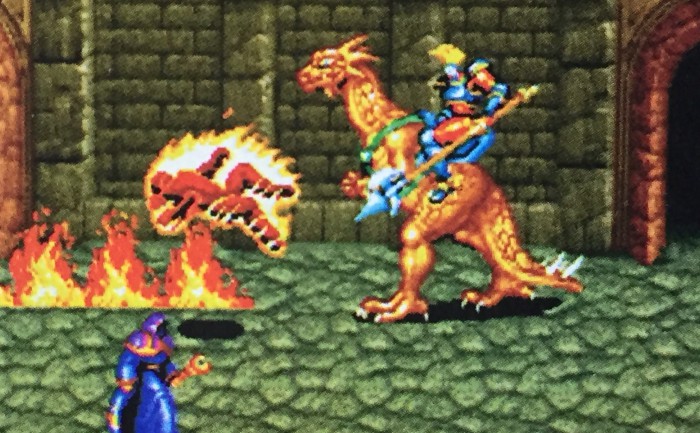 The Dragon Rider boss from stage 8 becomes a recurring regular enemy later on. He’s thankfully not as strong as his boss form, though. It’s a shame you can’t knock the rider off and ride the dragon yourself. A wasted opportunity for sure. 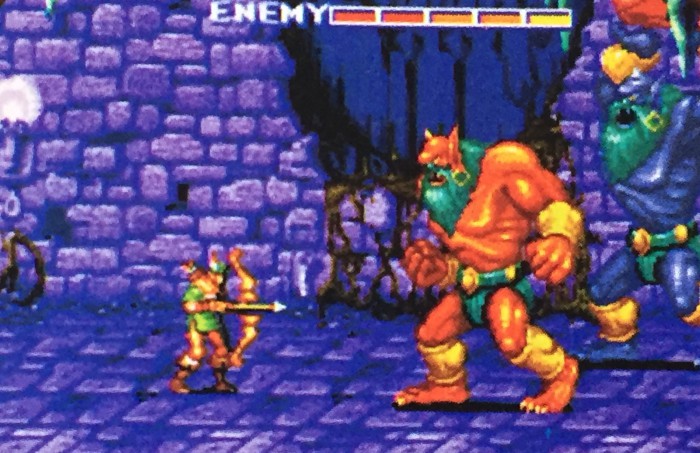 For the most part, King of Dragons fared reasonably well with the critics. EGM gave it scores of 8, 8, 7 and 7. GameFan gave it ratings of 78, 74 and 70%. Super Play was (once again) the harshest critic, rating it a paltry 53%. Super Play was notoriously stringent on beat ‘em ups, so I don’t take their scores for such games too seriously. Most people who have played the SNES port has raved about it. 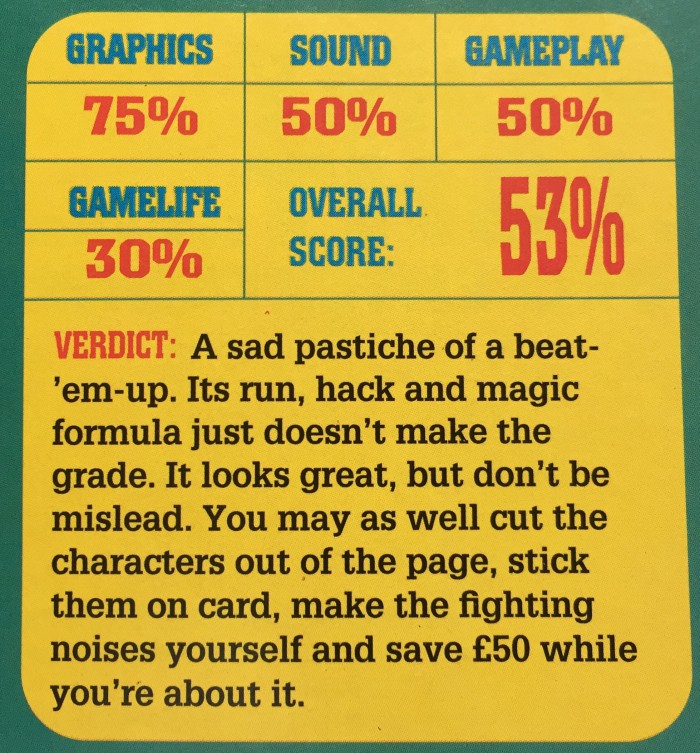 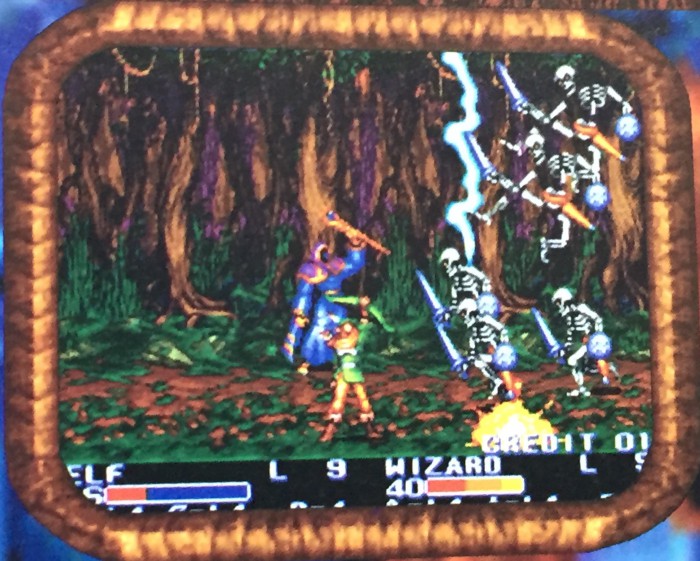 Prior to playing King of Dragons, I had heard lots of great things about it. It looked similar to Knights of the Round and coming from Capcom, I was sure to have a good time. Admittedly, I was a bit disappointed the first time I played it. I guess I had overhyped it too much based on everything I heard and read over the years. However, with repeated play I was able to then familiarize myself with the various characters and game mechanics. That’s when the light bulb came on and I began to appreciate all the subtle nuances. It impressed me with how varied it is for a beat ‘em up. Typically, these sort of games tend to grow repetitive pretty fast, but I find King of Dragons does a really good job of keeping repetition at bay. The five characters have different pros and cons across the board, making it fun to experiment with and forces you to employ different strategies. The bosses also have vastly different tactics and you must adjust for each one accordingly. The game doesn’t just throw you meathead after meathead where all you do is mash the attack button. And one of the best things about this game is the fact that sometimes there can be as many as five enemies on screen. The usual SNES count for these games is three, but King of Dragons will occasionally throw five at you. It’s impressive and makes you feel like other SNES beat ‘em ups are a bit lacking in the action department by comparison. 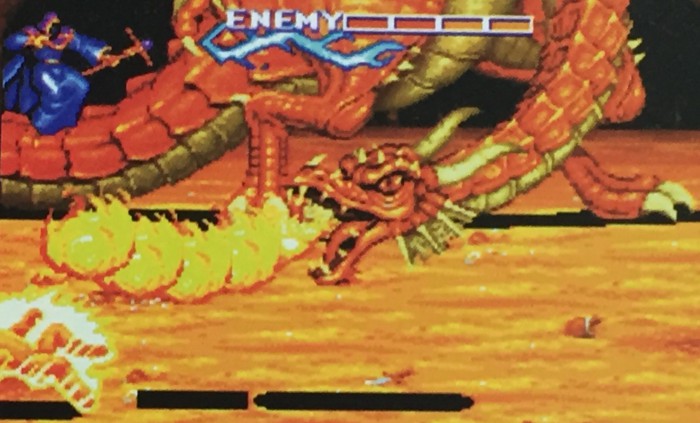 The visuals are pretty good although animation can be a bit stiff at times. Bosses look great — they’re often huge and menacing. Sound effects are pretty bad though, and the music isn’t anything to write home about. The gameplay (and atmosphere) is where King of Dragons excels. From the ability to block (for some of our heroes anyhow) to being able to level up, this has more variety and depth than most other beat ‘em ups. One thing that I had to get over early on was I thought this would be more of a beat ‘em up. By that I mean pounding bad guys in the face consecutively and then even throwing their carcasses around. It’s not like that so if you’re expecting that, you may be a bit disappointed (at least initially, like I was). You hack them once, then you move out of the way. Then you hack them again until they’re dead. There are no combos. No throws. No weapons to pick up (not necessary since they all already have weapons). It’s more of a hit and run affair, if that makes sense. 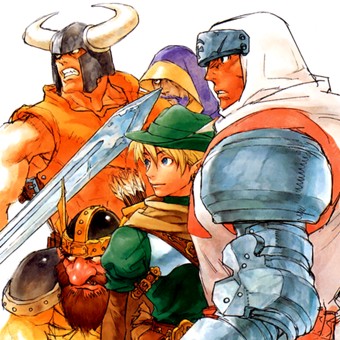 It’s a bit hard to describe but if you’ve played this game then you know what I mean. For example, some enemies die after one slash. Some die after two. And so forth. Whoever heard of one punch killing a bad guy? So the action is more measured and calculated than in most other beat ‘em ups, but I think in this case it works really well. There is some slowdown in the 2 player mode so it’s far from perfect. But overall, as far as the genre goes, this is easily one of the better beat ‘em ups on the Super Nintendo. It’s like a mix of Golden Axe and Knights of the Round. So if the idea of killing some Orcs, Minotaurs and Cyclops puts a big smile on your face, be sure to check out King of Dragons. And if you don’t quite “get it” on your very first try, I encourage you to stick with it and sample the different characters. Chances are you’ll hit your stride at some point and come to see why this is one of the best SNES beat ‘em ups ever made.