November 10, 2006, was a day for the ages. I received my last package of “ultra rare” Super Famicom games. It took a month of collaborating but finally my mercenary over in Japan finished the job, and what a job he did. With this score, I was pretty much set.

But I had no time to revel in its magnificence. I was on my way to a wedding banquet with my good friend, Eddie. Who got hitched? Our old high school friend Christina, Eddie’s old flame. And despite his efforts in coaxing me otherwise, I knew he still had feelings for her.

She’s the one he let get away, folks… and man… she’s a keeper.

By the time we got off the freeway it was dark and pouring. We were forced to stop at a train track. As the heavy rain drops pelted the roof of his car, with the loud rumbling of the train roaring past us, it happened.

JESSIE’S GIRL blared on the radio. Its cheesy yet classic 80s pop rock, not to be outdone by the tumultuous train, sliced through the cold night air with fierce vengeance.

I expected him to change the station, but he never did.

As the train roared on for what felt like an eternity, we sat there in silence, taking in the ambiance. I feared the lyrics would drive him over the edge…

Jessie is a friend.
Yeah, I know he’s been a good friend of mine,
But lately something’s changed; it ain’t hard to define.
Jessie’s got himself a girl and I wanna make her mine.

Y’know I feel so dirty when they start talkin’ cute,
I wanna tell her that I love her but the point is prob’ly moot. 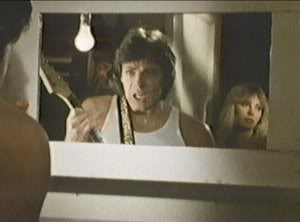 And I’m looking in the mirror all the time.
Wondering what she don’t see in me,
I’ve been funny I’ve been cool with the lines;
Ain’t that the way love’s supposed to be? 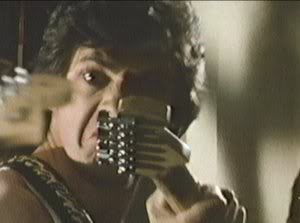 I WISH THAT I HAD JESSIE’S GIRL!
Tell me, where can I find a woman LIKE THAT?

I don’t know if it was the tranquility of that moment or some epiphany he later reached while parallel parking, but the night was full of fun and frivolity. He showed no signs of lamenting her. That night he finally put the past behind him.

Capping the night off, I arrived home tired but with enough energy left to eagerly open the big box. These games took me forever to find. And this next game is one of them.

Slated to be released in the states as CYBER SLIDER, the furry little guy was replaced by a robot devoid of any charm or personality. It was canned. Thankfully this version is available in all its original glory. The title character is a likable fuzzball, who awakens when you press start. Hey, where have I seen him before?

IT LOOKS LIKE EITHER A PLATFORMER OR A PUZZLER

But of course. In this case, puzzler. With some action elements.

SO HOW DOES IT PLAY?

You move Keeper around a five-by-five grid arranging stones. Your goal is to match 3 (or more) like-colors or like-shapes, vertically or horizontally.

In addition, players have the option of changing the character into a girl or boy. The stone designs, the default being sea related things, can also be switched to letters of the alphabet or fruits. It doesn’t change the gameplay but it’s always nice to have choices.

WHAT CAN YOU DO WITH THE LITTLE BASTARD?

I’ll pretend I didn’t hear that. Don’t you dare mock my cute little Gizmo knockoff. At any rate…

You can move around the borders of the 5×5 grid.

Keeper can also pull the blocks. I love the little sweat animation that Keeper has when pulling a stone. It’s little charming details like this that make this game a joy to play.

Players can jump ON stones and move around ON them to strategically push another stone elsewhere, provided there’s room.

WHAT MODES OF PLAY ARE AVAILABLE?

The 1 Player Puzzle mode has 60 stages to tackle. A password is granted after each completed level. Those who enjoy contemplatively staring at the screen until inspiration breaks with a resolute “A-HA!” will especially love this.

A look at the first couple levels, then.

They serve as a wild card. And since there are only two blues…

There’s something I really enjoy about the single screen puzzle action genre. Games like Little Magic and Keeper are mind-bending challenges where you could spend 20-30 minutes just nailing down one stage and being completely satisfied with. Keeper is full of charm, personality and challenge. The fact that there is a 2 player mode (co-op AND competitive, no less) puts Keeper ahead of Little Magic for me. If you love these style of games, you can’t go much wrong here. Keeper is simply, er, a keeper. Sorry. It’s a shame we were deprived of Cyber Slider here in the US, but at least we have Keeper to keep us company. And what fine company indeed it is.