I acquired Iron Commando (cartridge only) on October 11, 2006 for just $19.50. Today is lucky Friday the 13th, July 2018. And there’s a copy of this game complete in box going for $1,000 on eBay. Good God almighty. Holy crap am I glad I got back into the Super Nintendo when I did. I remember seeing screenshots of Iron Commando back in 2006 and thinking to myself, “This looks like it could be one of the real unheralded hidden gems of the SNES library.” Back in 2006, very few people were talking about Iron Commando. It was truly obscure then, whereas now it’s much more well known in the SNES community. I wrote a quick review of this game back in late 2006 and did my part to help spread the word. Unfortunately, I wasn’t too impressed with it. 12 years later and I still feel the same way. It’s a great looking game that had tons of potential but the end product just doesn’t execute like I had hoped. Hey, you win some, you lose some. I’m just glad my curiosity was cured in 2006 and for less than $20 too. 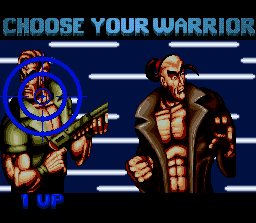 There are only two characters to pick from: Jack or Chang Li (no relation to Chun-Li). Most beat ‘em ups from the era had at least three choices. Sure, the token female is overly done but there’s a reason for it: to offer variety and more options. So right away we’re off to a less than ideal start but I disregarded my initial disappointment about the lack of a third hero. I just had a good feeling the gameplay was going to make up for it. Boy, was I off. On the bright side, two players can play simultaneously. 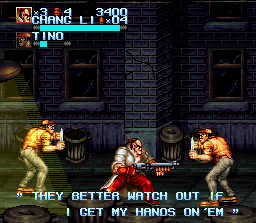 The first level opens up with a gnarly quote. It’s cheesy as hell but I loved it. Quotes occasionally appear at the bottom throughout this first level. It lends a B-Movie feel to the game but only appears in this stage, for better or worse. Iron Commando offers a myriad of weapons: 9mm pistols, rifles, machine guns, knives, baseball bats — I’m shocked there wasn’t a chainsaw as well!

Game looks badass, no? It looks like a lost treasure — how did this NOT make North America? But then you sadly realize that even the lowliest enemies take forever to kill, and weapons BARELY do any damage at all! It’s as if the game is unfinished or still in its testing phase. It shouldn’t take me an endless barrage of hits to beat a common thug with a baseball bat. That just renders the baseball bat useless. If the damage ratio was fixed, Iron Commando would be infinitely better.

This has to be a first in beat ‘em up history: the first boss being a truck. 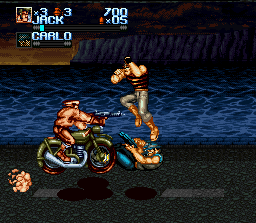 Welcome to the first of several auto scrolling stages. Two things are required for this stage to properly enjoy it…

1. Blasting Born to Be Wild by Steppenwolf

Trust me on this one, especially #2. 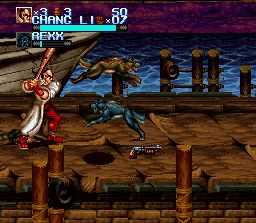 Yeah, killing dogs (even if they’re rabid ones) with a baseball bat would never have cleared Nintendo of America. They would probably turn those canines into mutant rats. Wolfenstein 3D knows. 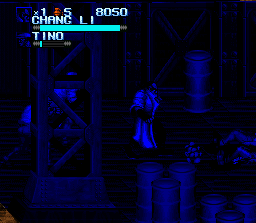 From the dingy dock to the interior of a creepy flickering warehouse you go. It’s a well done effect that you really didn’t see many SNES games utilizing. Notice the SLIVER of daylight in the bottom left hand corner there. Nice. 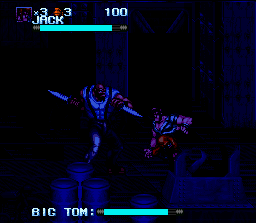 Didn’t Big Tom’s mom teach him not to play with knives in the dark? Tsk tsk. 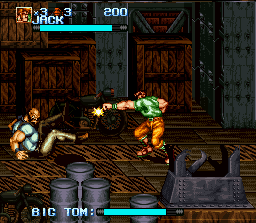 This is a cool boss fight thanks to the light that flickers in and out. It takes me back to all those haunted house attractions I went to as a kid… and ahem, as an adult… 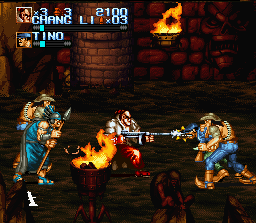 Enemies often crowd you; Iron Commando suffers from cheap mandatory damage syndrome. It’s quite annoying and drags down the experience. It’s pretty cool that sometimes there are four enemies on screen (most SNES beat ‘em ups keep it to three max at a time) but this actually works against Iron Commando since the enemies are really tough and hit you way too much. You almost have to play this game with a friend if you want to enjoy it.

Unmercifully cheap and annoying, you’ll hate snakes even more than the Medusa Heads in Castlevania. Yes, these slithering serpents are THAT bad.

Better kill him before the spiked wall impales you! 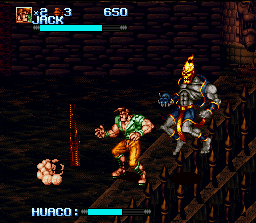 If the spiked wall or the boss doesn’t kill you, the spikes on the far right might!

A fun little DID YOU KNOW fact: these guys were all extras for Michael Jackson’s epic music video BEAT IT. 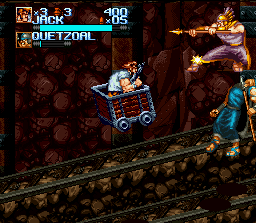 Yet another auto scrolling section strikes. It’s definitely a “little” more violent than the minecart ride in Donkey Kong Country…

Between the variety of violent weapons you can use and the cheesy quotes that pop up, Iron Commando might be the closest thing on the SNES to Capcom’s 1993 brawler, Cadillacs and Dinosaurs. It’s a shame though that Iron Commando is nowhere as good and that Capcom never gave us a home port of that title. 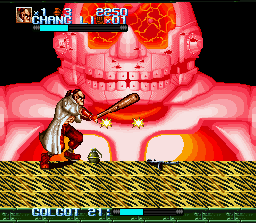 You’ll not only have to worry about Mr. Roboto but regular enemies as well. Killing them will allow you to gain access to their weapons. But beware of the robot’s laser beams and giant frisky hands. This fight lasts forever on account of poor damage ratio. That’s a shame because it ruins the whole moment, which starts out really cool but whittles down your excitement as the fight drags on and on and on…

A SECOND LEASE ON LIFE 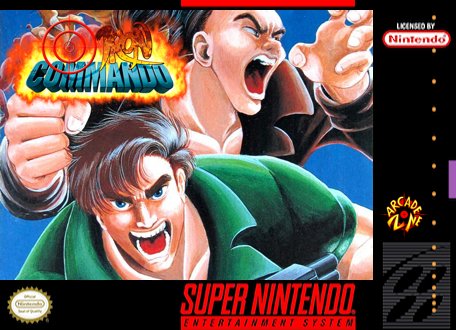 Iron Commando was released on February 10, 1995, in Japan in limited quantities. It is one of the harder to find Super Famicom games. Apparently, it was also leaked out in the European market. But in mid 2017, a company by the name of Piko Interactive re-released Arcade Zone’s brawler so that it might find a bigger audience.

Legend was Arcade Zone’s other SNES beat ‘em up, but that game saw an actual SNES release back in April of 1994. So why did Piko re-release a game that actually had an official North American release? Because of the Iron Commando tie-in, the re-release is also (naturally) much cheaper than what original copies of Legend run for today and why the hell not. I’m thankful I already own both games, though. If I didn’t, I might have gone the Piko route. Original copies fetch way too much these days.

On the surface, Iron Commando looks the part. If you see it in still shots you can’t help but think to yourself, “Man this game looks good!” It also makes one hopeful that it will play just like the glorious beat ‘em ups of yore. Unfortunately, Iron Commando only looks the part. It fails to play the part as well, which is infinitely more important than looking the part. The pros are obvious. The sprites are huge and look great. The overall look and aesthetic of the game pulls you in — it looks just like an arcade brawler from 1993 that you would play with your pals right after scarfing down some piping hot pepperoni pizza. It’s visually very distinctive and the weapon choice is undeniably badass. No other beat ‘em up on the SNES has as many tools of destruction. From Louisville Sluggers to sawed off shotguns, Iron Commando is drowning in an ocean of violent solutions. 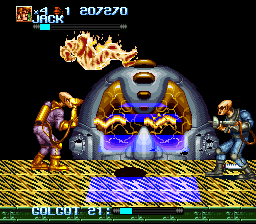 But here comes the ever so dreaded BUT part. Even on Easy, the game is insanely (and unnecessarily) difficult. You suffer countless unavoidable hits as enemies surround and flank you. It makes it really difficult to get into any sort of enjoyable flow when bad guys are bouncing you around like a pinball. The damage distribution is another glaring issue. Doing a 3-hit combo barely ticks their health. What gives? This dragged the whole experience down for me as punches and throws seem to have minimal impact. Initially, I thought to myself, “Ah don’t worry. The weapons will surely even up the odds.” Wrong. Weapon damage ratio isn’t much better. This is both ludicrous and inexcusable. If, however, you can look past these warts, Iron Commando can be a decent good time in brief bursts. With unique graphics and a B-Movie feel, the 2 player mode at least offers some thrills and spills. Still, one can’t help but feel this game massively misses the mark. What should have been an awesome beat ‘em up for the ages and a brawler lionized by a legion of fans is instead reduced to being, at best, an infamous case of “it’s not too bad, BUT…”