Today we look at a platforming trilogy based on the 1993 manga by Akira Toriyama. The GO GO ACKMAN games definitely have some good things going for them. You control Ackman, supposedly Satan’s lackey. As you slay enemies your winged companion captures their souls in a little jar (100 grants you an extra life). It’s all quite bizarre from the sense of humor to the bosses. Go Go Ackman does nothing new but what it does it does well.

The original is my favorite of the 3. It hooked me and I finished it the very same day. Punch, kick, run, jump, slide, climb, you even have bombs — all the quintessential platforming features. What’s really nice is Ackman can jump on an angel’s head and send it sliding across the screen taking out others (a la the koopa shells).

And of course what hero, or in this case, anti-hero, would be complete without the power-up shot? Making the game extra fun is the ability to pick up three weapons along the way. Check them out below.

The weapon is forfeited upon first hit, but on the upside a health bar is not deducted. FYI: the sequels you start with a sword, and weapons collected will remain even after receiving damage. I personally prefer the original way as it rewards skilled play. Again, I like the first game the most of this trilogy. Let’s take a look at some of the stages. 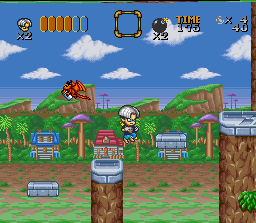 The first level is your standard, plain, easy stage, but I really like its look and early on I could tell this was going to be a nice little game. 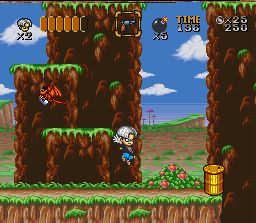 Here we are introduced to a darker brown tone with lots of hills to jump from, and plenty of instant death pitfalls. 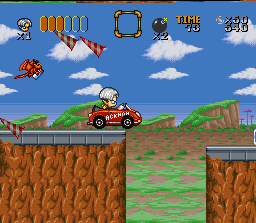 There’s even the force scrolling level thrown in for good measure. This one being a car ride. Of course, Ackman has his own special advertising splashed on the vehicle. 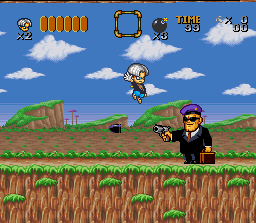 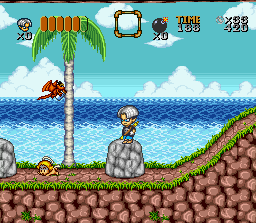 We move toward a more tropical setting. As my man Flavor Flav once said, “PEACE IN BELIZE!” 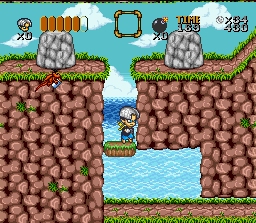 Keep an eye out for hidden passages that may appear on first glance to be a pitfall, but actually leads to a plethora of goodness. 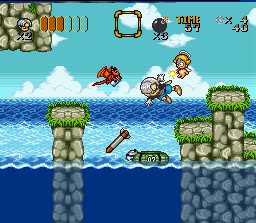 The next level sends Ackman on another force-scroller. This time he hits the high seas. 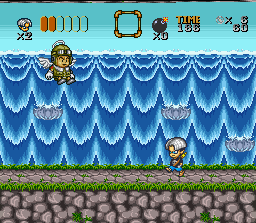 This boss has bombs of his own but no worries. Like the others he’s a push-over. 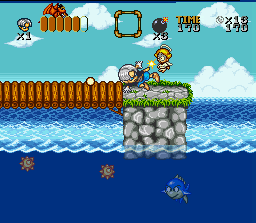 The next level has sections of water with sharks and other nasties.

This boss epitomizes the gist of Go Go Ackman. It’s funky and goofy. It doesn’t take itself seriously whatsoever, and that’s all part of the fun. 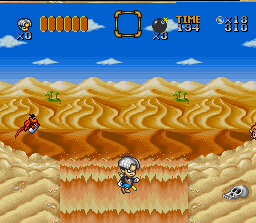 This level has a pyramid sand theme. Here the game takes on an extra graphical punch, with scrolls that stretch on. It’s pretty amazing in a simple kind of way. 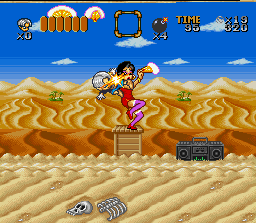 The first mid-boss of this world (boss 6 for those keeping count at home) is ridiculously easy. And off the charts bizarre. But you ain’t seen weird yet. Wait til we get to Go Go Ackman 3…

Next you enter a pyramid where new obstacles await, such as…

All in all, while the levels and boss battles are short in comparison to others of this genre, Go Go Ackman is a blast while it lasts. More levels await but I’ll let you discover the rest. Now let’s check out the sequel.

Part 2 came out July 21, 1995. I couldn’t get into this. After enjoying, pardon the pun, the hell out of the original, the sequel did disappoint as it felt like a cheap cash-in. It didn’t have the sweet feel or look of the original, and although old faces return (like some of the mid-bosses) the game just never came together for me. It is, however, the hardest of the trilogy by far. 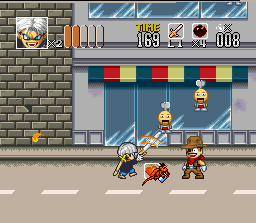 Maybe you’ll like it; in fact, I know some who prefer this out of the three, but I didn’t dig it too much. Not to say it’s a bad game — it just doesn’t compare to the original, in my humble opinion.

Released on December 15, 1995, Go Go Ackman 3 came out only *five* short months after Go Go Ackman 2. Were they cashing in, or making up? Personally, I say the latter. 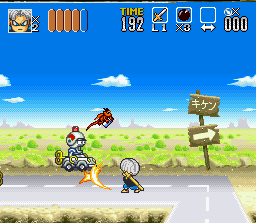 This is a classic case of “Oh wow, we really messed up the last sequel didn’t we. Let’s make another and get back to basics.” Playing this you really feel like it’s part 1 in terms of spirit. It has some cool level designs like the booby trap-filled prison. New features are thrown in the mix like shops within levels. Heck the game even has a nice prelude battle where you duke it out with your infamous angel rival… and his incompetence offsets the end boss so much that the angel is banished to your side. Thus, in certain levels you play as the angel rather than Ackman. With his propensity for flight it only further enhances the game playing experience. As Borat would say… “NIIICE.”

Here’s a quick glance at some of the happenings.

The first boss is (again) a return of old faces from the original. You joust with the trio in succession and the time lapse between each is handled brilliantly. 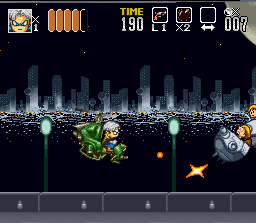 After you knock these re-tread bozos off their high horses, you have the choice of picking any one of their vehicles. The next section, depending on what you choose, is a shooter or action racer. Pretty dope. Like one of those old “Pick Your Own Adventure Path” books.

The second boss packs a mean punch, and you know I love good ole school boss flashing whenever they take a hit. Go Go Ackman 3 does “boss flashing” fans everywhere justice! Check it out.

Bear in mind this trilogy can be very off-beat. Look no further than this freakish cut scene.

This would NEVER have been approved for American audiences…

This next level is one of my favorite in the entire series. I just love the different booby traps and elevator-riding to eventually reach the top floor. The backdrops where you can see far into the background is an EXCELLENT touch.

Some folks prefer part 3 to 1 and 2. In my opinion, if you want to try Ackman, go with the original first, and then try part 3. If you only try one game however, my advice is to play the first one. But that’s not to say part 3 isn’t good — it is. I appreciated that they went back to Ackman’s roots for this third and final game. The second got away too much from what worked well in the first game.

Finally, there is a smattering of Japanese dialogue after each level in all 3 games, but it doesn’t affect your ability to progress in any of the games. Though I hear the text is quite amusing for those who can follow it.

I give kudos to Aspect for making this enjoyable, albeit derivative trilogy. The first one is a very solid, fun action platformer. The second was forgettable and the third one ended the trilogy on a good, redemptive note.