If you’ve ever seen the old 1974 flick THE TOWERING INFERNO (Fred Astaire, OJ Simpson, yes THAT OJ Simpson) then you will know exactly what to expect from this. 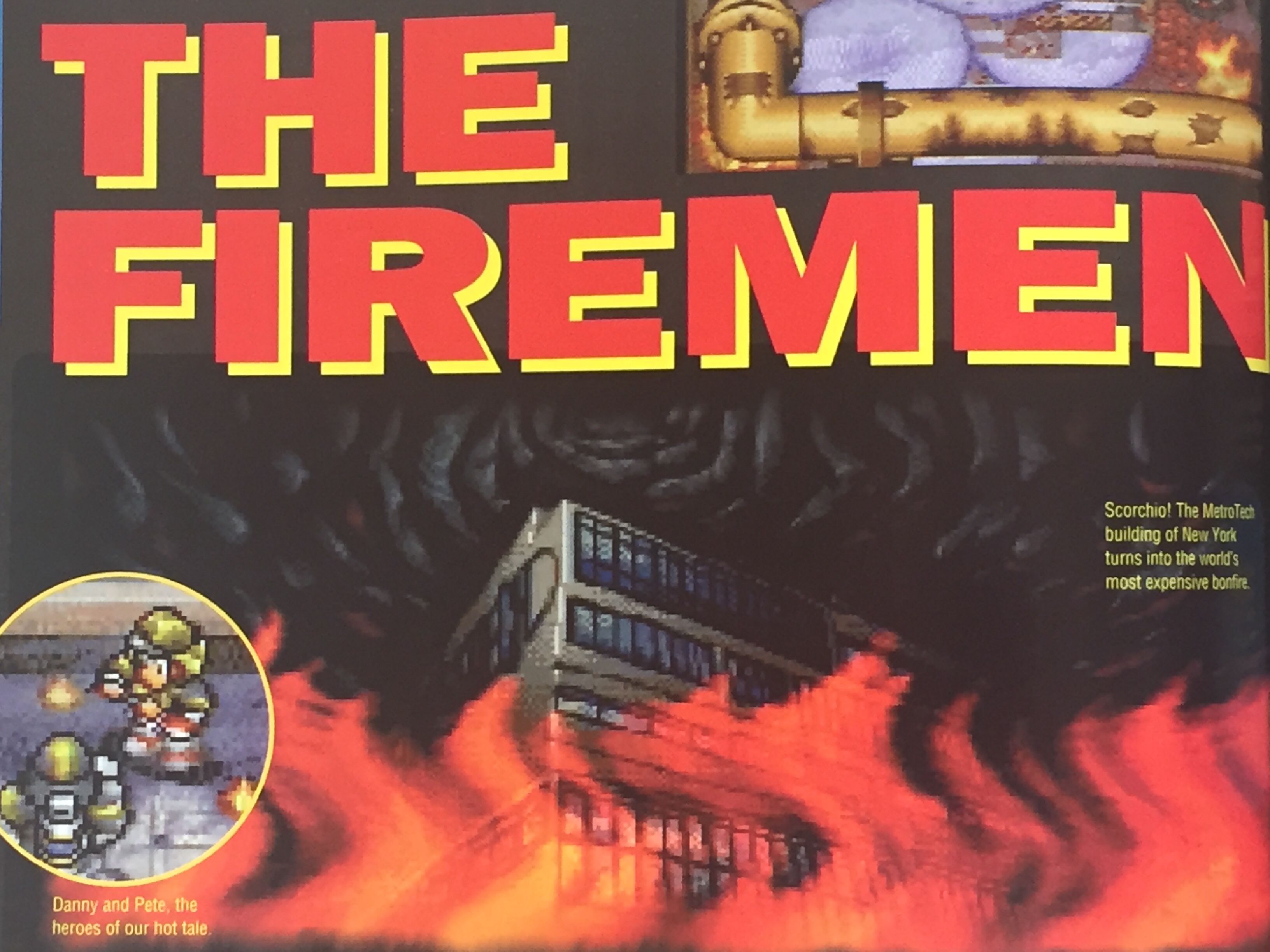 Ever since EGM ran a spiffy 2-page feature on The Firemen back in 1994, I’ve been curious about it. Made by HUMAN, perhaps most well known for their Fire Pro Wrestling franchise, The Firemen is a 1 player top-down action game where you navigate a firefighter through the burning MetroTech building. Use your water hose to extinguish flames, dispatch mechanical objects gone haywire and of course face intimidating end level bosses. 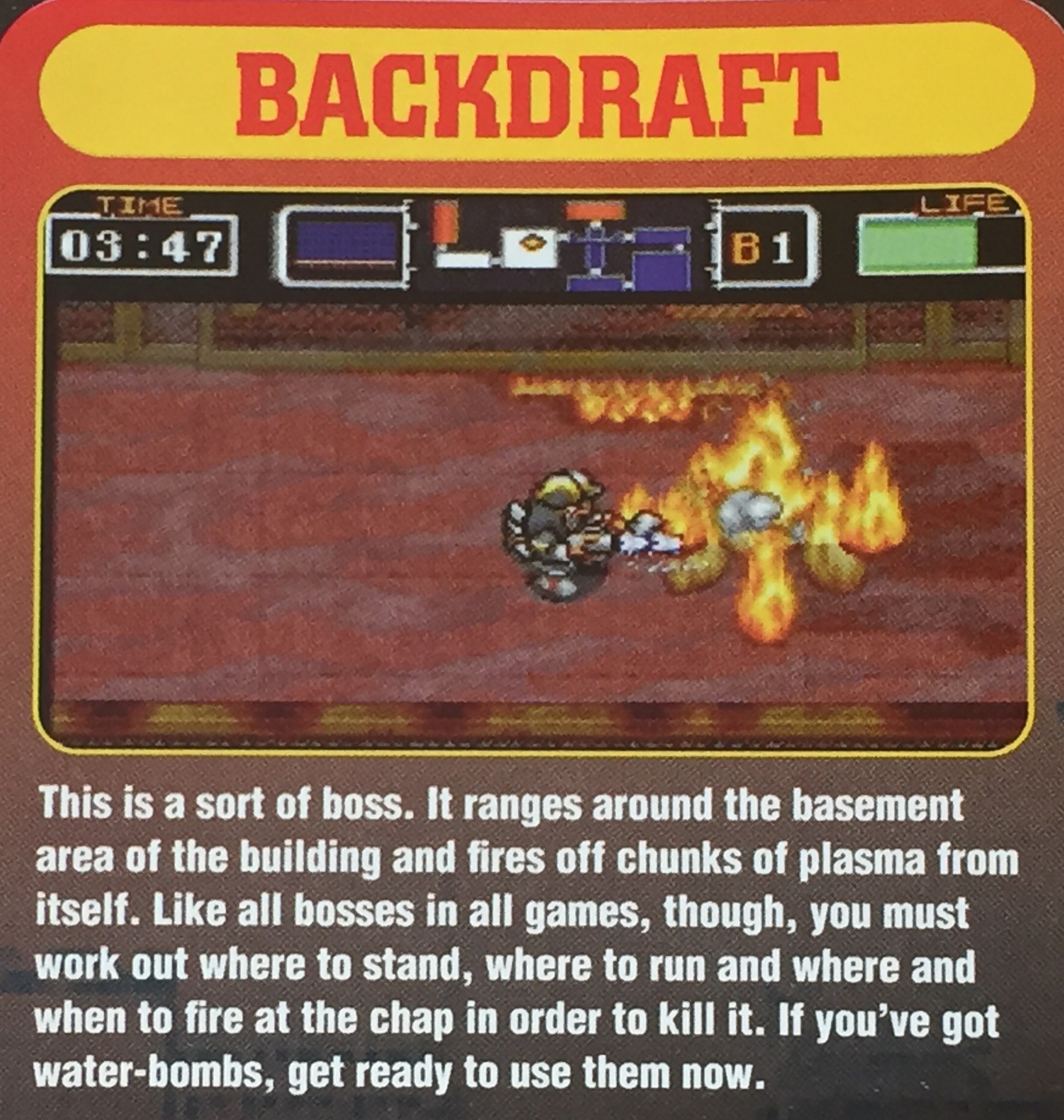 The Firemen is rock solid. It’s graphically pleasant with well-shaded characters adding a perception of depth, plays really well and the theme is unique. All of this culminates in a game which has that “cool” factor. There is some in-game Japanese text communication between Danny and Pete the firefighters, but nothing that hinders the game. Oddly, the game intro is in English.

It’s 6 PM on Christmas and a small fire in the MetroTech kitchen left unattended has spread throughout the complex. With the building burning to a crisp and injured people stuck inside, it’s your job to get in and neutralize the situation. There are six floors in all. Thanks to the whole theme and atmosphere, it reminds me of Die Hard, except replace the terrorists with deadly flames and the guns with a water hose.

Your partner carries an axe and helps in eradicating fires and other enemies, including bosses. He’ll carry out the victims as well. Finding and rescuing victims are not necessary, per se, but finding more means a better score and each time you save someone your health will be restored by roughly 60% (if necessary).

The buttons are simple.

You’ll mostly use the straight spray but the downward spray is the only way to eliminate small fires. The two main fire types are small and large. You can touch small flames without getting hurt. Crawling is critical at times. Much like Burning Rangers you’ll hear a quick whiz before all hell breaks loose. By crawling you can avoid backdrafts and fireballs. You’ll also crawl under high flames, desks and even through a vent! 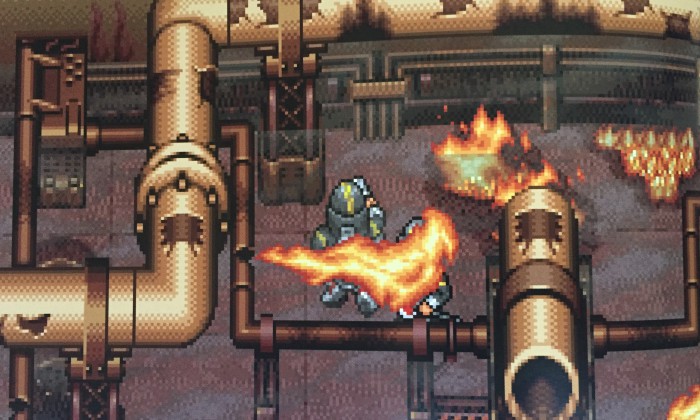 The bomb is your ultimate weapon and up to 3 can be carried. Save them for the bosses! If you have 3 already and find another bomb, pick it up so you can transform into a super firefighter with a bigger and stronger spray. There is also a separate icon for this rare power-up.

Just stay diagonal of this first boss because it shoots 4 flames (north, south, east and west) and then scurries around the screen. Another interesting thing about this game is that the bosses are not monsters or demons. They’re just flame-related, mostly normal everyday appliances gone haywire. Kinda gives the game a “realistic” feel to some degree. It’s not like you’re battling these grand three-headed flaming dragons, y’know?

This scorching flame ball boss can only be attacked with the downward spray. Keep in mind with this type of spray you move exceptionally slower. Be careful or it will char you to a burning crisp. 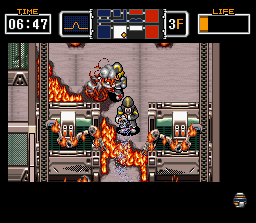 Things start to get trickier as stage 3 introduces back drafts, new enemies and collapsing floors.

Does this game have any flaws? Of course, it’s not perfect.

On the upside, at the end a detailed account of your game playing is given; everything from class to level completion times to total play time to % of rescued people and a total point score out of 100, so that can be something to shoot for on repeated plays. But the replay value is only slightly above average at best. 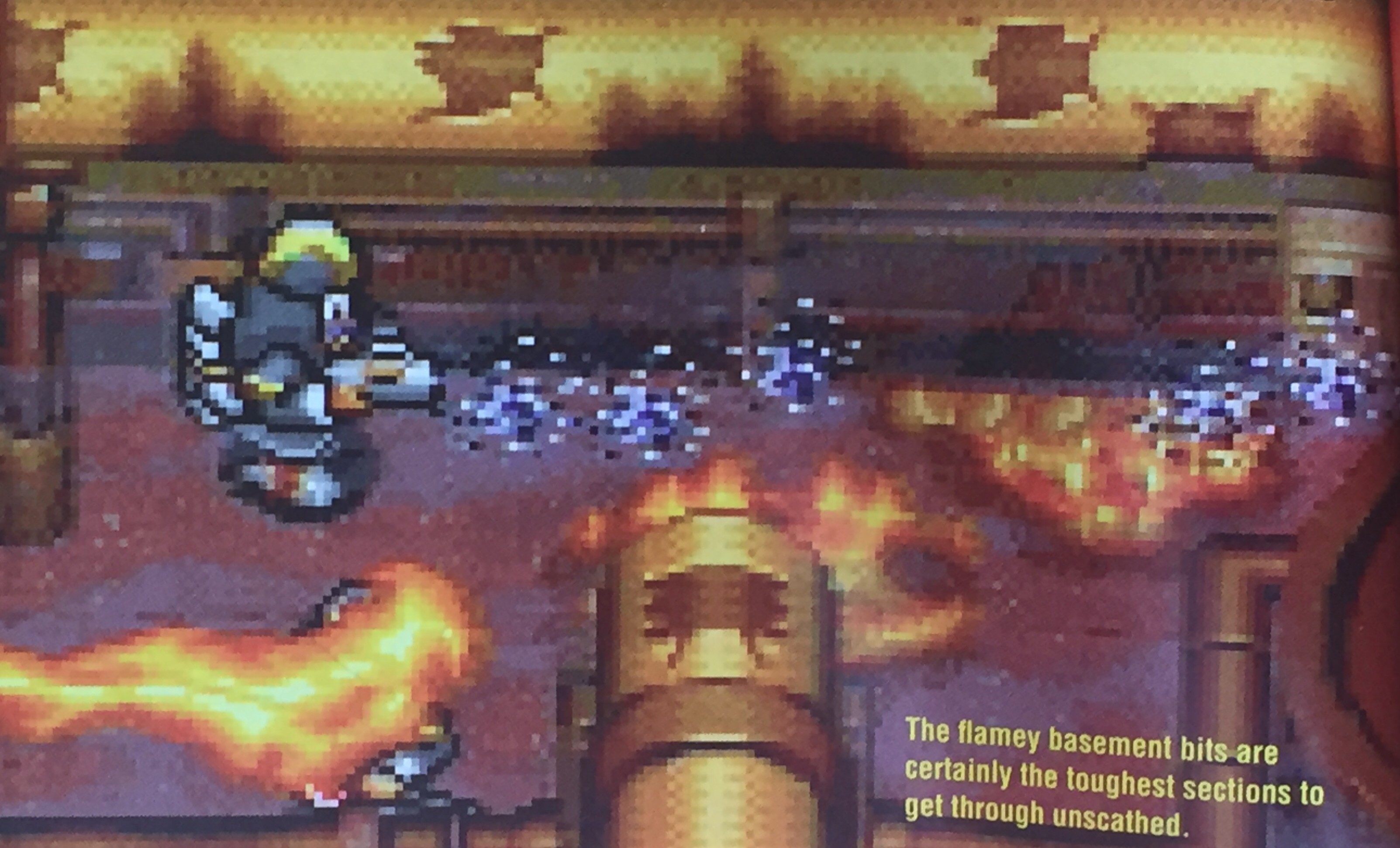 Other than those flaws, The Firmen does things more right than wrong. 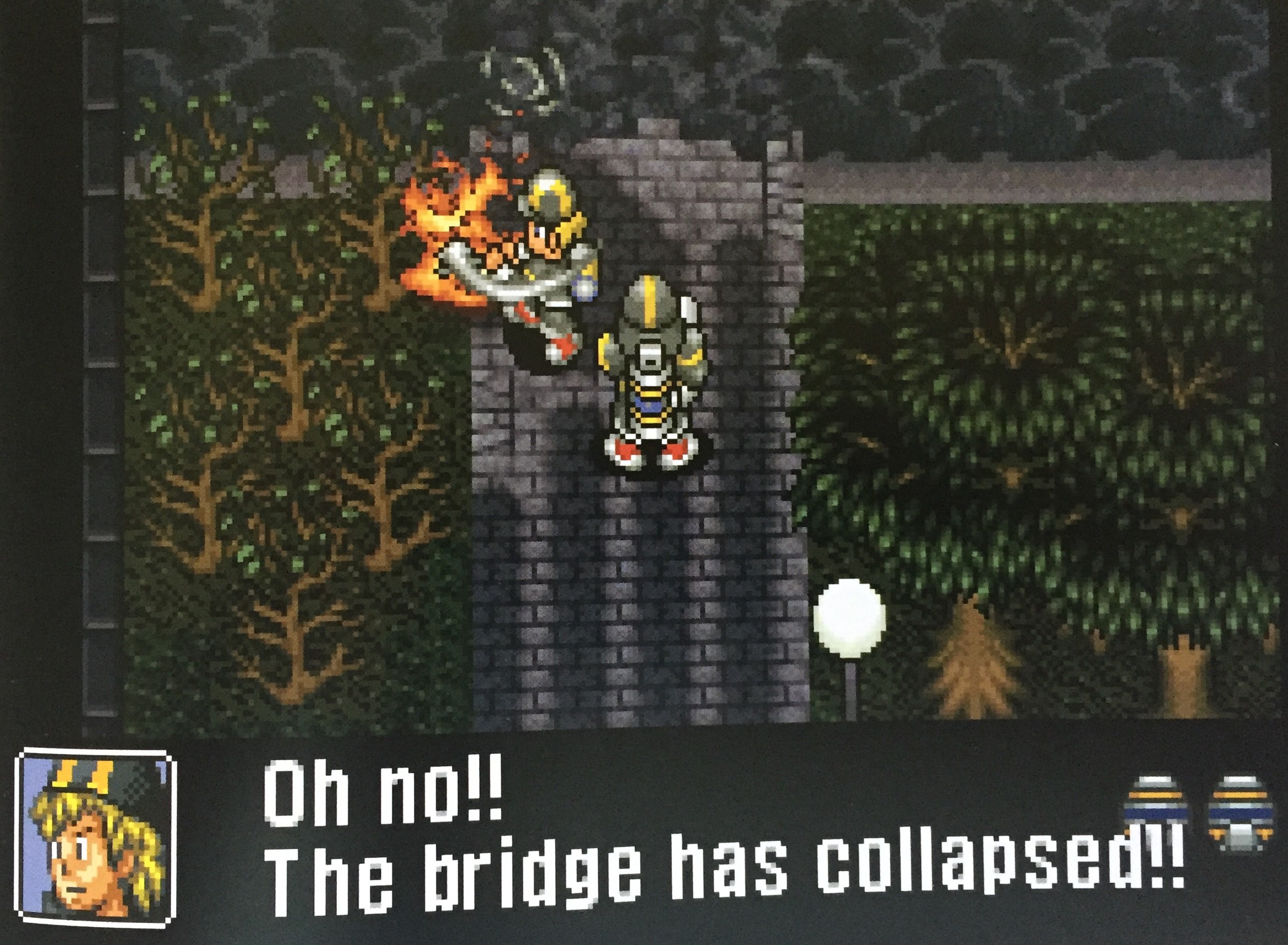 The Firemen is considered to be one of the better Super Famicom exclusive games out there. Its merit has been recognized a lot more in the past decade than when it originally came out. That’s due to it being cancelled as a North American release. Thankfully, fervent SNES fans dug into the system’s library in the 2000s and the game has found its way on to many “hidden gem” recommendation lists ever since. Super Play rated it 75%. 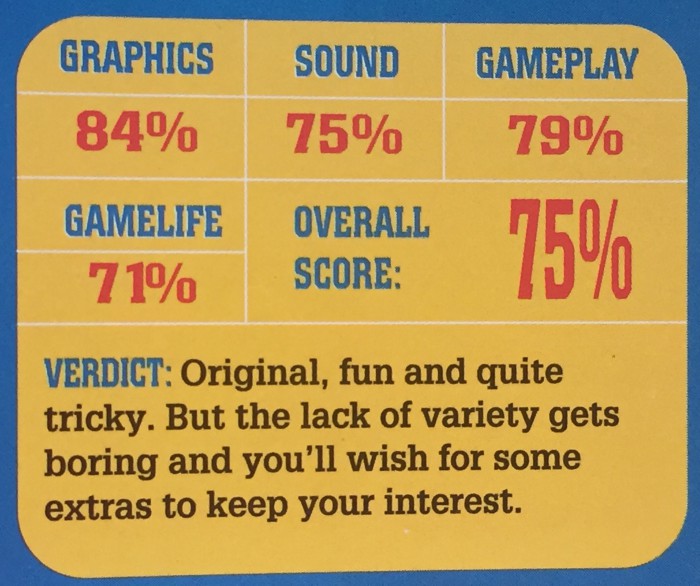 You know, when I first played The Firemen back in 2006, I really enjoyed it. I still like it but now that it’s been 10 years later, the novelty has long worn off, and I don’t view this game with the same lens as I did a decade prior. It’s still a quality action game, but I no longer view it as one of Super Famicom’s very finest. The action can get a bit tedious after a while. It’s too bad there isn’t a 2-player mode. The fact that you have a computer-controlled ally constantly assisting you only rubs salt in the wound. Also, I wish the fires were randomly generated, like Burning Rangers. Don’t get me wrong, I still recommend this game, but don’t go into this expecting some kind of masterpiece. But it’s solid, and definitely better than Jaleco’s Ignition Factor (AKA Fire Fighting in Japan).