Ah, the mid ’90s. Goosebumps was king — just ask any kid on the playground back then. Pretty soon you had clones appearing left and right. Whether it was J.R. Black’s Shadow Zone or Tom B. Stone’s Graveyard School series, everyone wanted a piece of the pie. Although I enjoyed those series, I always had a thing for Betsy Haynes’ Bone Chillers. I found them to be well written and fun. The first one I ever read was #4 in the series: Frankenturkey. Now, with a cheesy name like that, akin to something you might find on a trashy horror VHS box back in the ’80s, how can you not instantly be intrigued? Seeing as how I am writing this just after midnight on Thanksgiving morning, there’s no better time than now to revisit this relic.

Kyle and Annie Duggan are uprooted from Florida as their family relocates to Massachusetts. Kyle had it made in Florida. He resented the move but what could he do? As was often times the case with these middle grade horror books, it begins with the main character relocating to a new town. And that’s when trouble stirs… 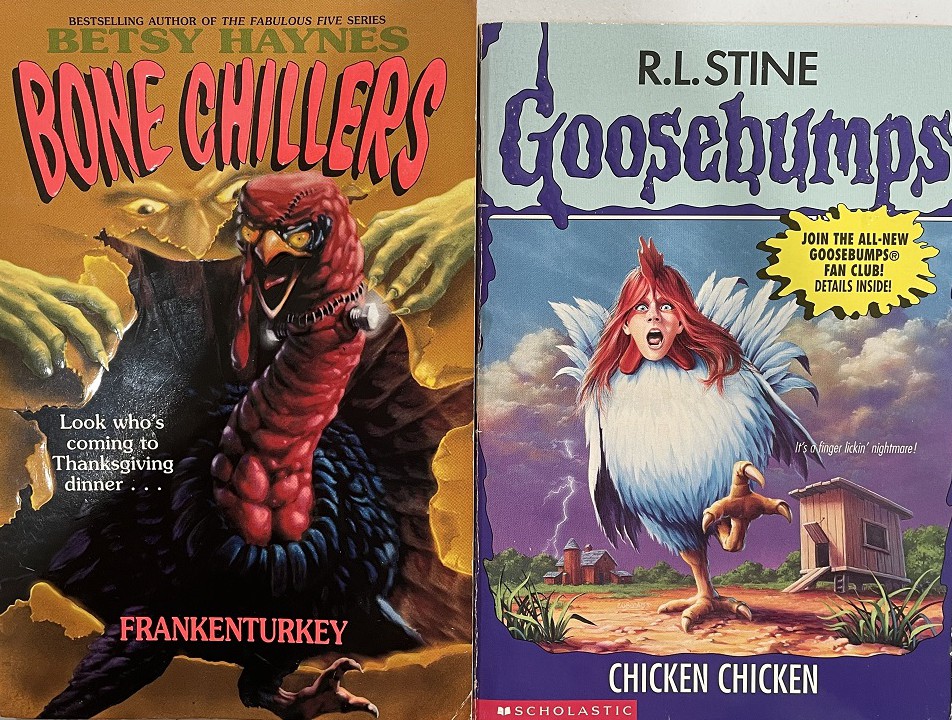 Even without the internet (readily available) back in 1994, we all knew that Bone Chillers was yet another in a long line of Goosebumps knockoffs. Now that doesn’t automatically mean it’s not any good — Bone Chillers was actually quite a fun series — but there’s no denying where the inspiration came from. However, as that old saying goes, “what’s good for the goose is good for the gander.” R.L. Stine might have drawn some inspiration from Frankenturkey when Chicken Chicken was published in March of 1997. But whereas Frankenturkey is one of the highlights of the Bone Chillers series, Chicken Chicken is, quite frankly, chicken shit. Easily one of the bottom 10 Goosebumps stories. Go figure. But I digress. 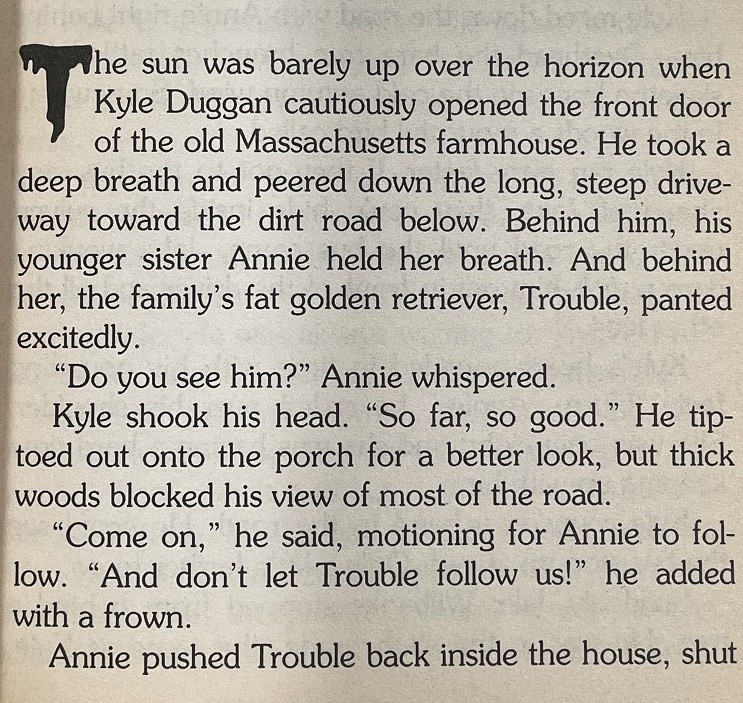 Not only did the Duggans move to a new house, but it’s a farmhouse. Already we’ve established a good setting with lots of creepy potential. By the way, I’ve always been a big fan of the font that this series used. 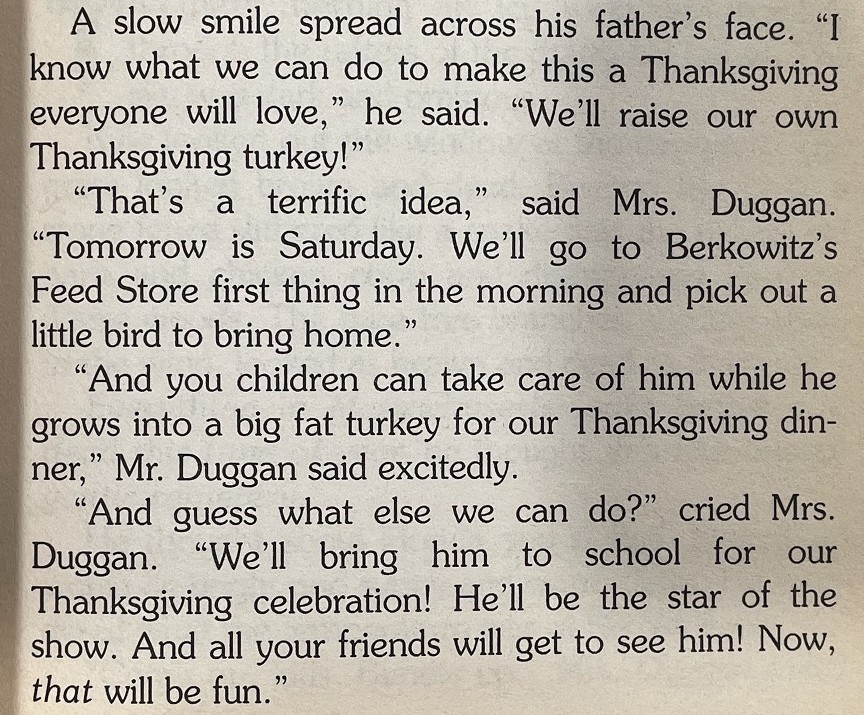 Back in the ’90s, many parents in middle grade fiction were written to be a bit dopey, especially for middle grade horror. And Mr. and Mrs. Duggan are the epitome of such. Not only do they want their kids to raise a turkey (fattening it up before killing and eating it for Thanksgiving dinner), but they want the turkey to be the star in their school play, which Mrs. Duggan directs. And they genuinely believe all this to be good ideas. Oh dear… 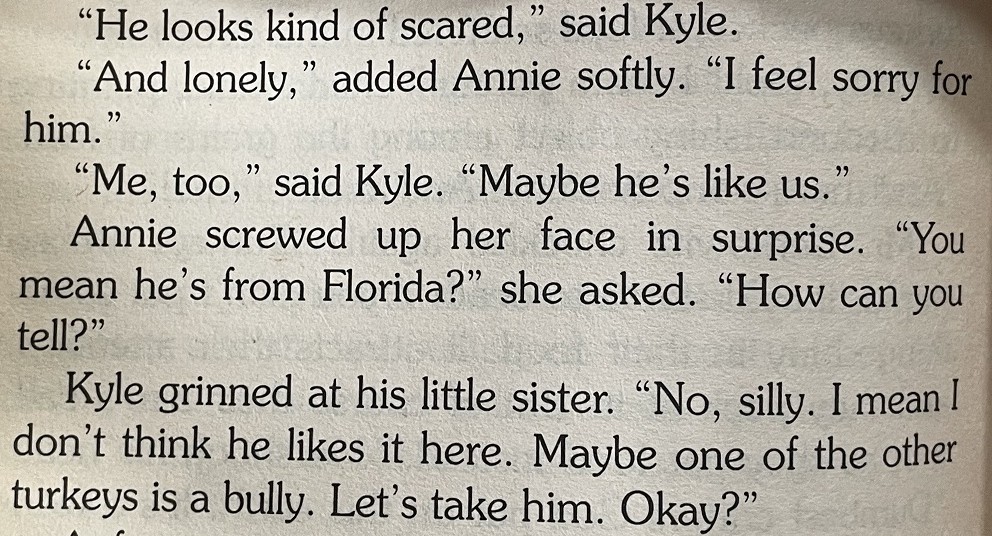 Annie was a cute little sister. Her line of “You mean he’s from Florida?” after Kyle says “Maybe he’s like us” gave me a good grin. Spoken just like a kid! I also like how Kyle made a connection with the turkey he wanted to purchase. It shows the reader that he’s compassionate and empathetic.

The line to end this particular chapter actually gave me a bit of the willies. “The little turkey was pressed against the chicken wire, and he was staring longingly back at Kyle.” Not bad, Ms. Betsy Haynes. Not bad at all. You know at some point the turkey is going to go bonkers. It’s just a matter of when and how… 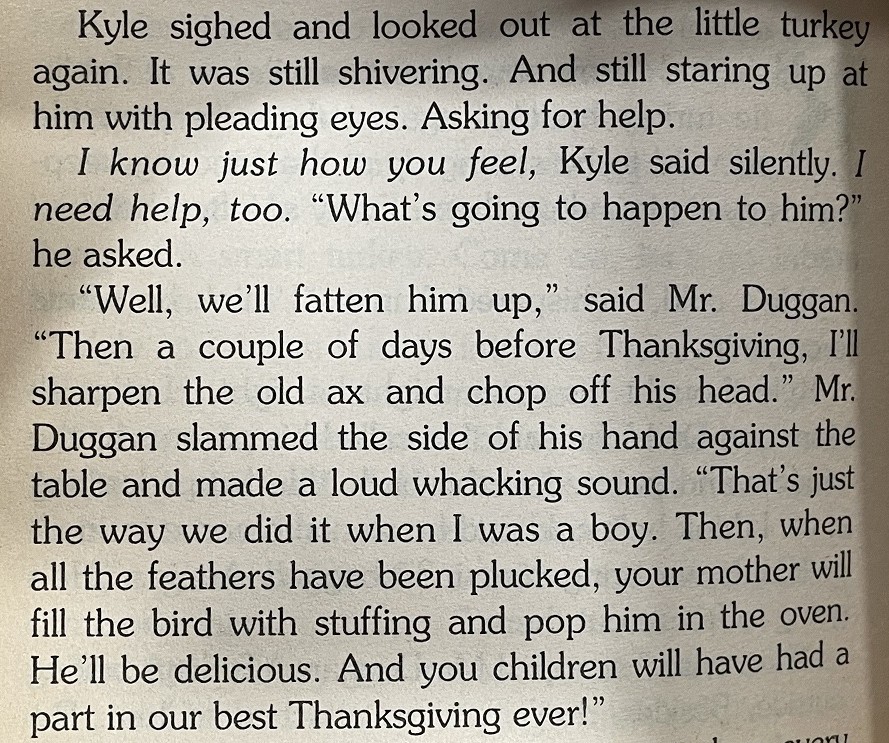 Jeez, Mr. Duggan. Lay off the theatrics a bit, will ya? But it does make for some good visual scenes!

We didn’t read middle grade horror back in the mid ’90s for their expertly crafted prose, but DAMN if every once in a while there wasn’t a solid gem produced here and there. The above paragraph is one example of such. I can picture it super vividly and there’s something satisfying about the way it was worded.

The last line there is so impactful! You can’t help but like Kyle and feel for him as he’s caught in quite the pickle. 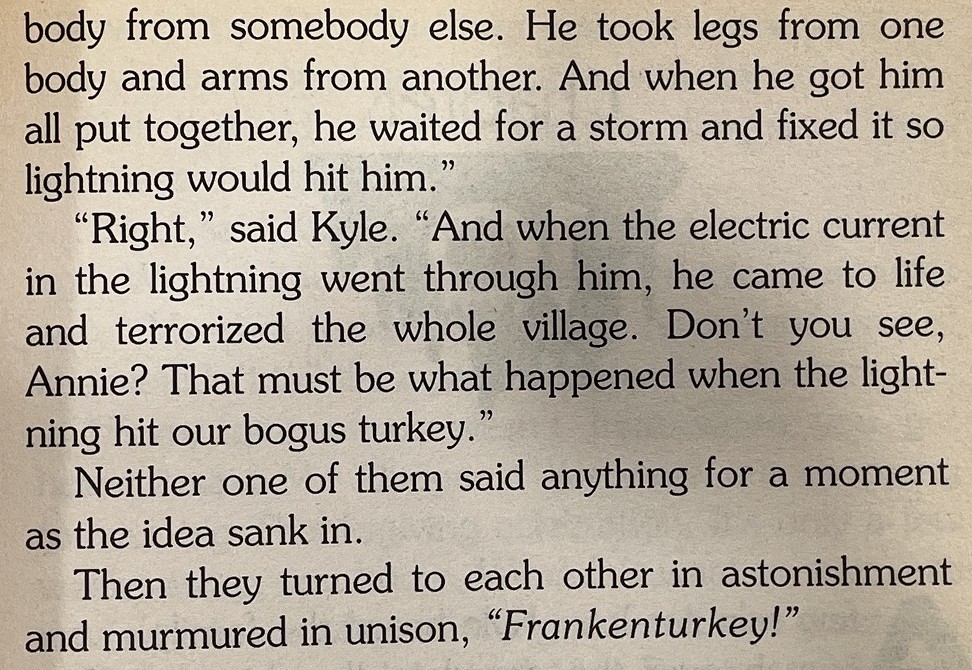 What a perfectly dramatic way to conclude this chapter and introduce the terror that is… FRANKENTURKEY! So we come to find out, the kids grow so attached to their turkey that they decided to fashion a crude bogus replacement, using a frozen whole turkey purchased from their local grocery store, some coat wires and Kyle’s Halloween mask from last month. Lightning strikes the abomination and the rest is history. What befalls the poor Duggans next you’ll just have to read to find out! 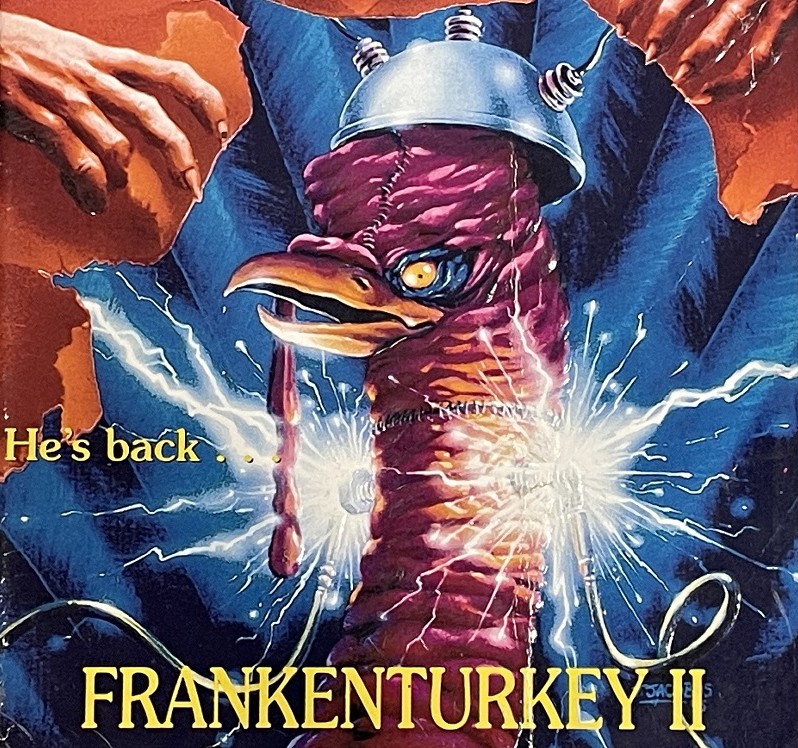 Apparently, it was so popular that it received a sequel the following year. And of the 23 Bone Chillers books, Frankenturkey was the only entry to receive a sequel. We’ll have to examine part II next Thanksgiving, won’t we? 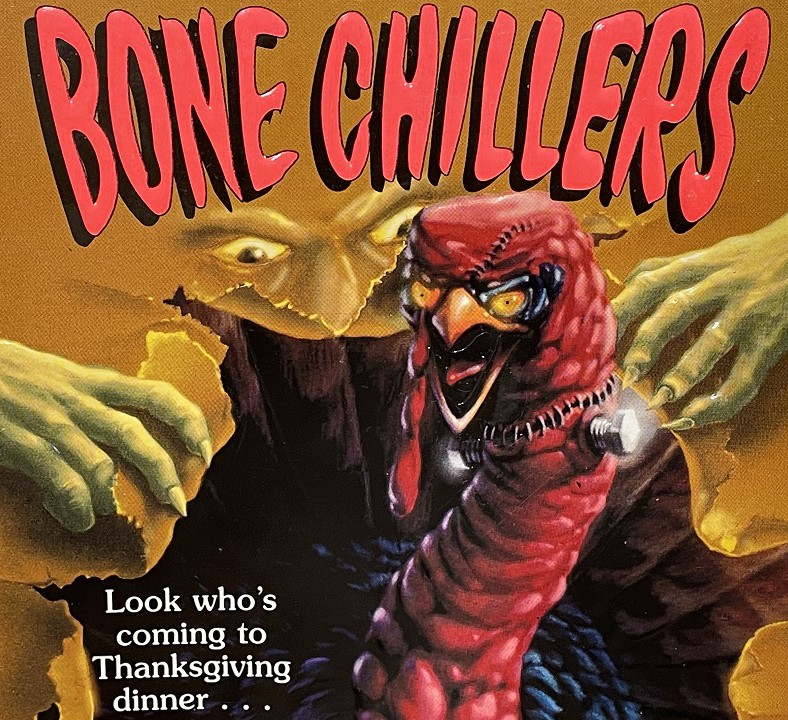 Bone Chillers has a special place in my heart. It was just so incredibly ’90s. The embossed cover, the alternating color schemes used from month to month, and that sinister entity tearing up the page of each cover to reveal the monster of the month — all gloriously embossed in classic ’90s fashion. I haven’t read as many of the 23 entries as I’d like, but so far Frankenturkey definitely ranks right up there as one of my BC favorites. The book has held up pretty well. Sure it’s cheesy as all hell and there are tropes a-plenty, but this is comfort food 101. Reading it brings me back to a simpler time when life was all about hanging out with your best bud playing video games and reading the latest monthly monster mashup. Those were some damn good times. And this is one fun relic I will definitely be passing on to my future kid!