If that sounds like an enticing combination to you (we can’t be friends if it isn’t) then SD F-1 Grand Prix is right up your alley. Sure, we never got the Super Mario Kart 2 on SNES as we desired back in the mid ’90s, but Video System released this clone on October 27, 1995 (nearly 21 years ago as I write this on October 23, 2016). It’s no Super Mario Kart (2) but it’s a decent alternative — hell, even an adequate companion piece to Super Mario Kart. Let’s examine and see why.

BLAST FROM THE PAST

If you grew up in the late ’80s and early ’90s in America then you probably have fond memories of hitting up Chuck E. Cheese’s as a kid. I know I sure did. It was the cheap pizza (which at the time felt like Heaven to a kid), the festive atmosphere and the ARCADES. It was an epic place for a kid to be. A place where a kid could truly be a kid. But I think we can also agree on this… those old school animatronics left us with an eerie memory or two! Just look at them. They’re so robotic and stiff, it’s a bit unnerving to watch them “sing” when you were a little kid. But we all have memories of it (for better or for worse). Chuck E. Cheese’s, I salute ya. Thank you SD F-1 Grand Prix for reminding me of a simpler time in my life. Perhaps that’s one contributing factor to why I like you so much.

WHERE HAVE I SEEN THIS BEFORE

Right away you can tell what the tone of this game is. It’s not serious. It’s cute, and fairly charming. I like how they give you stats for each racer. Even though the racers in Super Mario Kart had their pros and cons, it’s nice seeing it spelled out explicitly.

Similar to Battle Racers, you have a health bar that’s reduced any time you fall in a pit, ram into barriers or blasted by the opposition. Unlike Battle Racers though, instead of finding health refills inside capsules, SD F-1 has a healing strip along the beginning of each track much like F-Zero.

BUT DON’T LOOK DOWN ON THIS GAME

Sure it rips some things off from Super Mario Kart and F-Zero, but those aren’t bad games to get inspired by. There are different camera angles to pick from. The default is Mario Kart style. But one allows you to make SD F-1 look just like the earlier F-1 Super Famicom games… that being from a bird eye’s view point.

2 player game (besides obvious GP and whatnot): 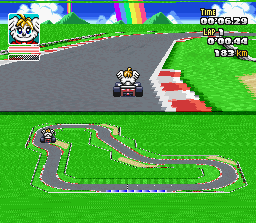 The classic, essential, bare bones first stage to acclimate the player to the mechanics of the game. To say it conjures memories of the first race track from Super Mario Kart would be a gross understatement. 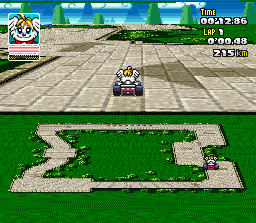 Some tracks contain helpful arrows, such as this one. Maybe it’s just me but this course reminds me slightly of Bowser’s. 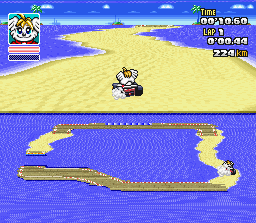 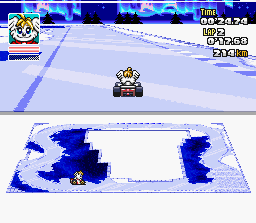 Northern Lights! The ice has nice detailing as well. Another one of my favorites, this frozen lake course is actually cooler looking than the frozen courses found in Super Mario Kart. Just my opinion of course, but it’s the little details in the ice as well as the Northern Lights that gives SD F-1 Grand Prix the edge. 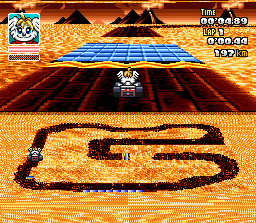 The lava track has a super jump section much like the beach one. I have to say graphically it is superior to Super Mario Kart but that’s kind of expected as one came out in 1992 and the other in 1995. 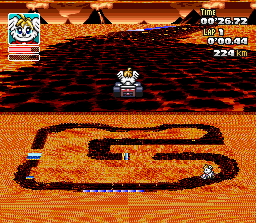 I love how you can see this course unwind far into the distance. Lovely!

Remember GamePro Magazine? That’s a classic ProTip they would have said. My favorite to this day was the ProTip about the CyberDemon. ProTip: Shoot at it. 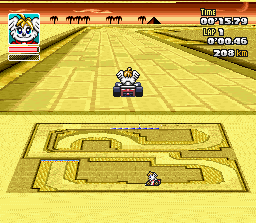 I love the wide range of locales you race in — the visuals are pleasant to the eye and really makes you want to race each of the courses.

Super Mario Kart meets a cast of Chuck E. Cheeses rejects. In a nutshell, that’s what SD F-1 Grand Prix is. What it also is… is a damn fine racing game. It’s loads of fun with a few different ideas to differentiate it enough from Super Mario Kart. Don’t get me wrong, it’s a most blatant clone, but it’s a well made one. It’s not as smooth playing as Super Mario Kart, but visually it’s better and I really like some of its tracks. If you love kart racing games then you really owe it to yourself to get this one. SD F-1 Grand Prix is yet another great Super Famicom exclusive title. Pick up a copy if you can — you probably won’t regret it.