The Bomberman franchise is one of the most beloved series of all time. Especially when you’re talking about multiplayer gaming series. Almost everyone knows about those games. But what not many may be aware of is this puzzle rendition of the franchise. And I’m happy to say it’s pretty damn good. Hell, it even features a 4-player mode because, BOMBERMAN!

3 pieces drop at a time. The goal is to match 3 in a row (horizontal, vertical or diagonal).

In addition to the Bomberman pieces you have 3 others: 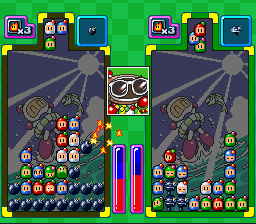 Note: This blast doesn’t destroy the Bomberman pieces. Rather it ignites the unlit bombs, taking them off your field.

And once you’ve filled up your power bar, you receive the almighty MEGA BOMB.

It can take out almost every piece on the field, depending on block positioning.

The mega bomb is the most visually impressive “clear-all-ish” piece I’ve seen in a puzzler. Panic Bomber actually uses a special chip. The mega bomb definitely gets the treatment as it pulsates with flames and makes a huge boom when dropped. It’s sheer, raw, unadulterated POWER at its finest. Thank you, Mr. Special Chip Thing.

Of course, while the goal is to keep your playing field from filling up, the best way to beat the opposition is by crafting chain reactions. The 3-falling pieces instead of 2 format will take some getting used to for many of us, but once you do the combo’s flow. Here’s a basic 2 hitter:

To create huge chain reactions you have to set yourself up. Here’s a 3-hit combo. Notice I’ve stocked up on red and green. Not to mention some white…

Not only do the greens connect horizontally but diagonally as well for a sweet 6 piece combo. It drops the stack of 3 reds…

But of course, being a Bomberman game, what good would it be without a 4-player mode?

Simply brilliant… brilliantly simple. The smallness of it might be a bit off-setting initially, but you’ll quickly adjust. Besides, a tiny amount of the occasional squinting is more than worth it for a chance to duke it out with 3 buddies, puzzle style.

And like any classic Bomberman title, it’s very user-friendly — 2, 3 or 4 players can play, with 1-5 matches to win the trophy. “B” allows you to go back to the previous screen.

Of course, when you chain together combos you can cause much grief to your rival opponent(s). 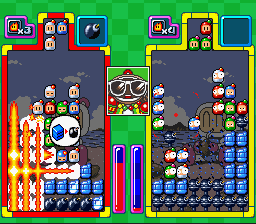 In the 1 player mode after beating your opponents you get a password. 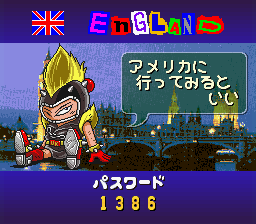 Speaking of the passwords, there are some cheat codes to alter the visuals.

Why? Why not. Little touches like these are always welcomed in my book.

Super Bomberman Panic Bomber World is a fun puzzle game that is more than a cheap cash-in. It’s more than a lame gimmick to milk a popular franchise name. It’s a game I would happily pull off my shelf to play, and in fact, I often do. It takes the classic formula and spins it well within the world of a puzzle game. True, there’s nothing ground breaking here, but it’s solid through and through. Even the classic Bomberman tune is replicated nicely here, and it fits very well with the puzzle madness.

By far the standout feature here is the 4-player mode. The only other 4-player puzzle game on the SNES that I can think of is Super Tetris 3. It’s definitely a novelty that’s worth experiencing at least once. Perhaps it won’t ever supplant your regular Bomberman 4-player battles, but it’s definitely an entertaining and competitive good time. Panic Bomber – you alright!

Super Puyo Puyo Tsuu Remix was the last Puyo Puyo game released on the SNES (March 8, 1996). And it’s also the best of the lot. They’re all great, but this one takes the cake. There are some minor tweaks made here that set it above Super Puyo Puyo Tsuu. If you only buy one game from this series on the SNES, be sure to make it this one. 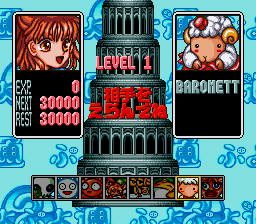 There are a ton of computer opponents to go through. Here’s just a quick look at a few of them. There are literally over 30 (!) 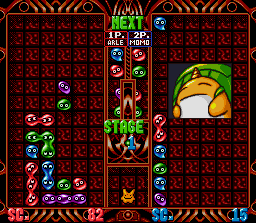 It’s the classic formula you know and love. Connect four or more like colors to clear them. Creating and setting up chain reactions is the name of the game, as clearing four at a time isn’t very effective. It’s tough but loads of fun. 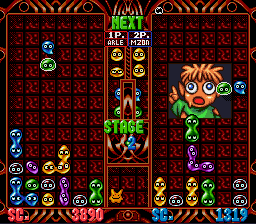 Send garbage blocks over to demoralize the competition. Nothing like nailing a 4 hit chain reaction to send over a crap load of garbage blocks! 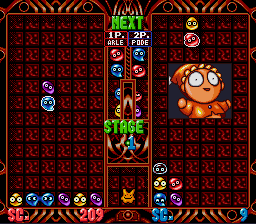 There’s a purity to Puyo Puyo that makes it timeless. Most puzzle games involve a certain amount of luck, but this game really relies on skill and premeditated combos. A highly skilled player almost always beats a significantly lesser skilled opponent. It does kind of kill the fun of competitive battles if the skill levels are too lopsided. On the bright side, there are options to even the playing field. 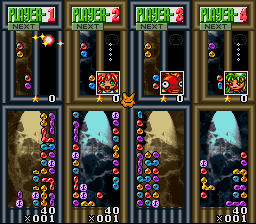 The previous game, Super Puyo Puyo Tsuu, introduced a 4 player mode. But it could only be played with four humans. In this Remix edition, you have the option of setting player 3 and 4 to be computer opponents. That way if it’s just you and a friend and you wish to play the 4 player mode, you can. A small change but definitely a nice and noteworthy one. Be prepared to squint a little though unless you’re playing a huge TV. 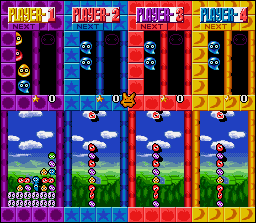 The best Puyo Puyo game on the SNES and one of the best puzzle games on the entire system. It blows Kirby’s Avalanche out of the water because it has way more options, better control (you can flip pieces even when there’s no room — you couldn’t do this in Kirby’s Avalanche and that was kind of annoying) and of course the 4 player mode. If you love the SNES and puzzle games, then Super Puyo Puyo Tsuu Remix is a must-have.