Ganbare Daiku no Gensan is the sequel to the Hammerin’ Harry games found in the arcade and NES. While scouring the net for information on this Super Famicom title (back in 2006) it shocked me there wasn’t much to be found. Maybe part of it is because it’s called Ganbare Daiku no Gensan instead of Hammerin’ Harry? While it’s no Super Mario World, it definitely deserves a moment in the spotlight. 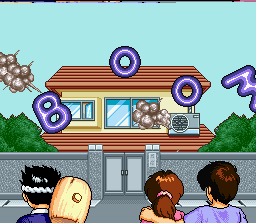 One day an evil corporation blows up this lovely house here. Well, they picked the wrong house. Harry’s out to put an end to this evil empire, and along the way, they snatch his sweetheart just because, well… they’re evil.

You go through 4 stages, each with 2 zones. After all this you face the final boss. Harry will traverse towns, woods and even a booby trap-infested factory zone. The game has a nice urban Japanese feel to it, and probably one reason why it never saw a Western release.

Harry attacks with his trusty hammer. The standard-issue hammer you start with is serviceable but you definitely want to find an upgrade ASAP. You can swing hammers left, right, down and up. Harry can also chuck his hammer across the screen, a move that is a MUST if you want to beat the later stages and bosses. (U, UF, F + attack… why couldn’t they have just made it D, DF, F?) If you didn’t have the manual you’d be screwed not to know this key command which is so obscure.

There are two hammer upgrades; unfortunately, they all have short attack range so you will take some cheap hits more likely than not throughout the game. Thankfully Ganbare Daiku no Gensan is not a 1-hit-wonder. You have an energy bar at the bottom of the screen.

Harry also has two power-ups he can use. Throughout the stages are muscle icons hidden inside crates and barrels which you can break open. When you have 1 or more muscle icons you can press X to unleash two special moves that should be reserved for the bosses.

Special move #2 is much more effective and useful. And since they both use up only one icon, there’s no reason ever to use special move #1.

Note: boss names are strictly made up by me and not official names. Alliteration freaks will appreciate it…

1-1
Your journey begins in this easy stage that allows you to get the feel of the game. Smash the SD Zangief-wanna-be clones and watch out for cranky female street sweepers and stray cats. You can jump on roofs and on shingles Harry will gradually slide down. Good stuff there. 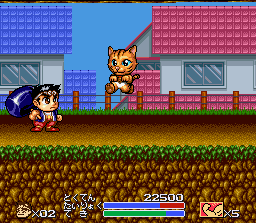 BOSS 1: CAT-MAN
A man in a giant cat suit. Something is wrong with that picture. At any rate, a SUPER easy boss with a pattern that’s laugh-out-loud simple. BTW, all bosses have twice your health. When you get him down to about 25%, he sheds his cat mask…

1-2
This stage opens as a racing section; enemies on bikes ride by trying to pelt Harry with rocks. Either close in and hammer them, or ricochet their rocks back at ‘em. There are two racing sections in the game which help to add some variety to the proceedings. After this section you go back to regular platforming business. 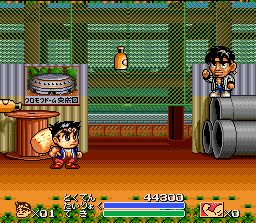 BOSS 2: CHUCK THE CHUCKER
The boss cakewalks might be over here, but he’s not really hard. True to his name (that I’ve given him, mind you) he chucks bottles and other debris at Harry.

2-1
Here we begin the foray into the forest. Mad red-faced chimps run wildly around as the crazy cranks sweep the forest floor. (why? Those crazy Japanese) Harry can climb on tree trunks to make his way to the top of their limbs to break open crates. Beware of the poison power down that does damage to our SD hero. 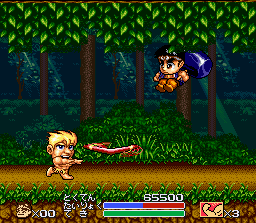 BOSS 3: BOOMERANG BILLY
This wild mad-cap Tarzan wannabe swings on vines and when he’s on solid ground will toss boomerangs your way. Simple pattern. Show him who’s King of the Jungle.

2-2
Some nice little features in this stage. Wooden sticks pop out of the ground and you have to figure out which ones to hit to cause the other sticks to come out on higher ground, so that you can jump on those and make your way out of the pit. Midway through this stage you will come across a cool little construction zone. They’re trying to destroy everything these mad men! You can’t take my woods YA HEAR ME?! *shakes fist* [cue Groundskeeper Willie] YA CAN’T HAVE MAH WOOOOODS! *ahem* 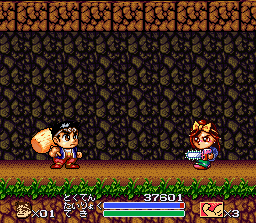 BOSS 4: CHARLENE THE CHAINSAW CRUSHER
Ah those crazy Japanese. She has a simple but fun pattern. When she chases you on the ground sparks fly like wild from her chainsaw. Watch out for those falling rocks and remember to jump quickly!

3-1
The second and final racing section. After this you go through platforming business per usual. Very short until you run into a crazy scruffy ole bloke. 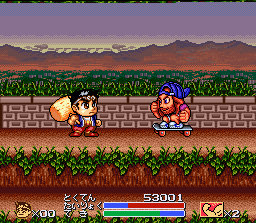 BOSS 5: SCOTT “THE SCRUFFY SUICIDAL” SKATEBOARDIN’ SAVAGE
I love how this game is so Japanese-y and along comes this rather American bloke, heh. Easy pattern — you just have to time it well. Send Scruffy packin’!

3-2
My favorite stage. You make your way across a nice little waterfall, with falling blocks after you touch ‘em. Standard classic platforming from the beginning of civilization (or the ’80s..) The coolest part of this stage though is when late afternoon suddenly rolls into to beautiful and peaceful evening, with the stars out in full force… it’s really a nice little atmospheric change. 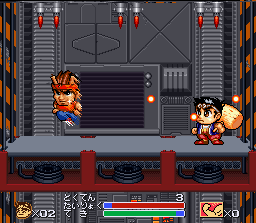 BOSS 6: DYNAMITE DAN
This guy can be a true pain in the neck. Not only does he bounce from wall to wall like freaking Spider-Man but he throws sticks of dynamite at you as well as other means of destruction. At the same time the ground will heat up so there are many ways for you to lose energy. Having 4, 5 muscle icons really help here.

4-1
Almost there! 2 more stages to go after this! Harry’s travels take him to the factory zone where booby traps and foot soldiers litter the place. There are old scientists in tiny cramped up corners madly controlling crushing machinery — the only way to get through these parts is, as mentioned earlier in the review, to employ the highly obscure U, UF, F + attack command. This sees Harry tossing his hammer across the screen and back like a boomerang. 4 hits will kill the old scientists and the crushing machinery will stop. Just hit them with your hammer to destroy them then.

BOSS 7: DOCTOR DEATH
What an intimidating sight for sore eyes. Ole crazy Doc here mans this heap of machinery in hopes to thwart Harry’s efforts. What can I say but… look for the certain shots that are ricochet-able… and have many muscle icons on ya…

After you beat Doctor Death he escapes and kidnaps your girlfriend in the process. Well, I won’t spoil the rest. You have 4-2 and 5-1 to figure out on your own. I will say this: 4-2 boss is very annoying but it’s all a matter of figuring out their patterns and weaknesses. Ah the beauty of video games. Final boss is easy. This battle stretches 3 screens wide!

Time for some random shots. 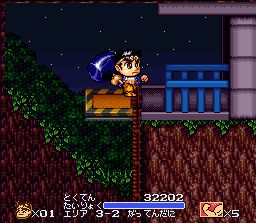 Worth hunting down? Yes. It’s not a serious platformer by any means. Just look at the screenshots and you can tell it’s erring on the goofy side. It doesn’t take itself seriously and doesn’t do anything bad. Not a stand-out title, but nonetheless a nice game to have in the ole library. It’s nice to see Hammerin’ Harry have at least one Super Nintendo experience. Was probably a little too bonkers to warrant a US release, but at least we have the means to experience it still on our SNES systems.