There are games you hear about and instantly know it’s right up your alley. But sometimes it seems too good to be true, and you find out the game was cancelled, never made available on physical cartridge or whatever. Sutte Hakkun was that to me — a game which I thought was an exclusive BS-X game (a type of Super Famicom downloading service in Japan). But then it achieved such positive word of mouth that Nintendo decided to release it on an actual Super Famicom cartridge on June 25, 1999. This is, quite possibly, the last great Super Nintendo game ever released.

I obtained my cartridge only copy through a mercenary I had living in Japan for $29 on October 11, 2006 (wow, 10 years fly by fast). Today cartridge only copies of Sutte Hakkun go for over $100 (which as ridiculous as that sounds is actually kind of surprisingly low considering how much some of these scarce highly sought after titles can fetch).

Sutte Hakkun is a platform-puzzler. Taking command of a translucent creature resembling a dipping bird, your goal is to reach the rainbow orb(s) in each level. It sounds simple but of course, as you can predict, the later levels get quite tough.

The buttons are very simple. B jumps and Y pecks. By pecking, you can absorb helpers (i.e. blocks) and move them to new positions to help you reach the exit. There are also jars which contain red, yellow or blue paint. By pecking, you can suck the color out of a jar and transfer the paint to blocks, causing the block to move in a set pattern, depending on the color you’ve injected. Red goes up and down, yellow diagonally and blue horizontally. Of course they don’t travel the full length of the screen — there would be zero strategy if that were the case. Rather, the blocks travel a short distance back and forth.

LOOK AT WHAT I CAN DO

Sutte Hakkun translates to “Suck and Blow.” [We’re all mature enough here right? -Ed.]  And that’s exactly what you’ll be doing a lot of. In this game, I mean. At least in this game. [Oi -Ed.]. You’ll spend a lot of time sucking paint and transferring them into the transparent blocks.

Of course you can freeze a block’s movement by sucking the paint out of them, and it’s by this method that allows you to change a block’s height to better suit your goal.

That block now travels higher based on where you’ve injected it. Nice!

As you can see, this is a rather unique puzzle action game. It’s quite creative and brilliant. You just can’t help but love it. Major props to Nintendo for breathing new life into a genre that has way too many similar games.

The beauty is there are multiple ways to solve a level. The method seen above is just one, but I’ve completed level 1 and some of the others in different ways. It’s really awesome to see how many different solutions there are but they all get you to your end goal — the next level.

And should you want to harmlessly dump a color for whatever reason, simply press down on the control pad.

LEVEL 2 AT A GLANCE 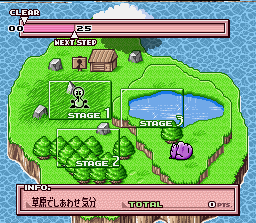 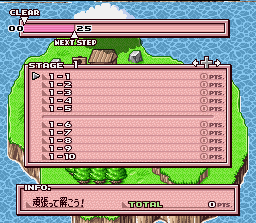 There are many stages, with 10 levels in each stage. The further you advance the crazier they get. Trust me, the later ones are INSANE. Just be grateful there’s no time limit! 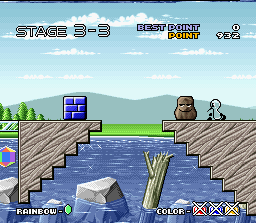 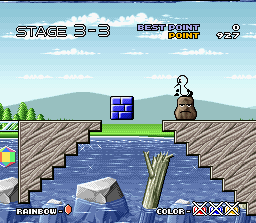 This coming from Nintendo and all, Sutte Hakkun is filled with nice little details. Look no further than the stone that goes from a smile to a frown the moment you hop on its head. It’s these little touches that just make you grin and appreciate the great effort from the fine folks over at Nintendo.

Press R to scan the level — later stages have a bigger layout so this comes in handy. Sometimes it helps knowing what lays ahead.

A fine action puzzler that will last ages on account of the later stages being damn tough. I dare call it a must-have for every SNES owner who enjoys staring contemplatively at the screen until inspiration breaks through with the resolute “A-HA!” The last great Super Nintendo game ever released, Sutte Hakkun is a piece of history and a true piece of video gaming art. The Super Famicom received so many fantastic games that never saw the light of day here in America. Sutte Hakkun is another shining example of such. It’s a mind bender in every sense of the word, and puzzle fans are sure to eat this one up.