Although I started RVGFanatic nearly 12 years ago with the main goal of reviewing SNES games, I’ve always wanted to highlight a select handful of Genesis games that have resonated with me over the years. I finally reviewed my first Genesis game last month, Sonic the Hedgehog (appropriately so). It only took me over 11 and a half years but hey, this now makes two! Streets of Rage is a dear personal favorite of mine, especially when it comes to beat ‘em ups and Genesis games. Released in Japan on August 2, 1991, this month marks the 27th anniversary of Streets of Rage. And with the Streets of Rage 4 announcement made just a few days ago, I can’t think of a better time to pay homage to this game than right now.

By the way, there’s just something magical about those early Sega Genesis boxes. Many of them are incredibly nostalgic to me. Every little detail, from the white grid adorning the black background on the clamshell box to the cheesy but charming early ’90s art style, all add up to some wonderful memories of a special time in our young lives when video games were video games. By that I mean when games came fully packaged. Don’t get me wrong, there are some great benefits to the digital medium, but nothing will ever beat out physical copies complete with badass art and good old instruction manuals. All those vintage memories of sitting in the backseat of your dad’s car, eagerly scanning every tiny screenshot a hundred times over and devouring the manual front to back on the ride home… those times will never be replicated.

IT CAME FROM JAPAN…

In a rare case, both the Japanese and North American names for this game absolutely rock. Bare Knuckle sounds cool as hell, but then so does Streets of Rage. In fact, I’ll give the slight edge to Streets of Rage. Not just for familiarity and nostalgia but how can you beat the name STREETS OF RAGE? I mean, that’s badassery personified.

ROUND ONE: CITY STREET

Although graphically it may not seem like much today, I can’t emphasize how much the visuals blew me away some 27 years ago. The first level sets the perfect tone, with the Pine Pot diner being a memorable standout. Although this first stage is full of bright lights and color, it’s also full of danger. There’s a certain grit to it and it has an impeccable late ’80s vibe. It almost feels like a Michael Jackson music video could break out at any moment!

Nothing like a good ol’ leaping knee to the mush.

Remember how those mini garage doors would open dramatically, revealing a bad guy inside? A classic trope of the genre that never gets old, no matter how many iterations appear.

Perhaps the coolest and most memorable “ass saving special” in beat ‘em up history. I don’t know of many cooler than calling on your cop buddy who comes barreling in only to launch an all-out fiery assault. It’s things like this that makes video games so damn fun.

The sprites in this game are smaller than I would like, but the bosses are usually significantly bigger. Just look at Boomer, f’rinstance. He was an intimidating sight back in the day, for sure, with his oversized boomerang and towering physique. 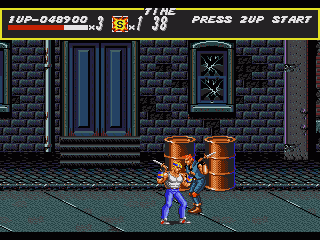 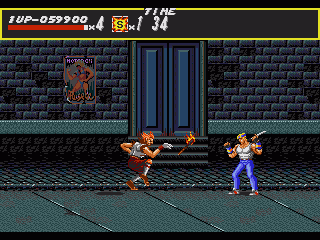 I remember this clown being the first regular enemy that gave me some trouble.

When my best friend Nelson and I first saw this, we both had to pick up our jaws off the floor. Sure, it’s not as memorable as the rain in Legend of Zelda: A Link to the Past, but this was definitely a cool moment. And one that sticks out in my mind even 27 years later. 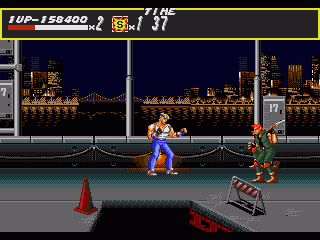 What’s a beat ‘em up without a level where there’s some kind of opening to throw bad guys into?

Big Ben is yet another classic genre trope. It’s the fat bald guy who ironically likes to run.

One of the cool things about Streets of Rage is how crowded the screen can get. Most SNES beat ‘em ups, for comparison sake, would often max out at three bad guys onscreen. Not the case here!

I love the SNES (you might have noticed that…) but there’s definitely nothing like THAT on the Super Nintendo.

If you’re not careful on this level, your brains will get crushed. But it’s fair game, so lure the enemies in if you can. No bonuses, but it’s just plain irresistible!

Another classic genre trope: previous bosses becoming “regular” enemies. The actual boss for this stage admittedly reeks of laziness: it’s just the stage two boss, only this time there’s two of him to contend with.

No boss is featured here, it’s just a straight shot up to the final stage. My best friend Nelson and I always got a kick out of using our special attack here. There was something ridiculously amusing about watching our cop buddy send a blast high and deep into the night sky from ground level.

By far the hardest stage of the game. This is due to a couple reasons. Namely, being indoors, your special attack is rendered useless. The second thing is you’ll face enemies (and former bosses) galore! In fact, the ever lovable (or not) beat ‘em up trope of a “boss rush” or “boss gauntlet” is in full (annoying) effect here. 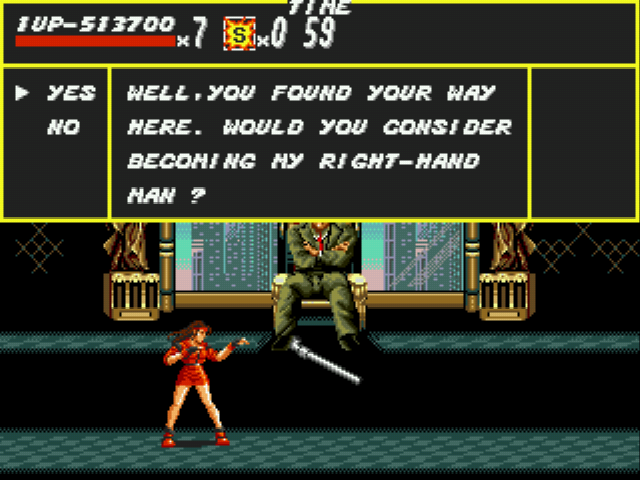 When you finally make your way to the top, Mr. X will offer you the chance to be his top crony. If you select yes, you’ll be sent back to level six and forced to play through to the end of the game. This also applies to when both players say yes. However, if one of you says yes and the other says no, you’ll be pitted in a duel to the death. Only by selecting no (both players have to select no in the 2-player mode) do you immediately fight Mr. X. This was pretty cool, especially back then when things were very cut and dry. This at least gave you the option to rebel and presents a bit of a moral dilemma. It’s nothing crazy but for 1991, it was a nice subtle touch.

My brother and I always held this final boss fight in high regard. That’s because Mr. X was the spitting image of my brother’s best friend’s dad. Yep, Kerwyn’s dad was Mr. X in the flesh. So whenever we went to Kerwyn’s house and saw his dad, we couldn’t help but stupidly grin at each other behind his dad’s back. Ah, to be kids, eh?

Mr. X’s lethal gun is no joke though, that’s for damn sure.

One of the many neat things about Streets of Rage is the ability to work with your friend and perform some sweet tag team attacks. 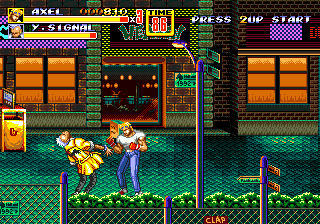 Released just mere days before Christmas of 1992, Streets of Rage 2 is often considered the best beat ‘em up not only on the Sega Genesis but of all time. 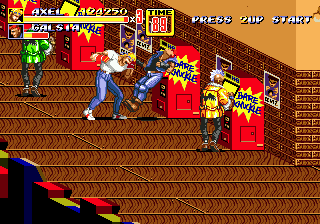 I definitely dig it too but I don’t know. Call me an overly nostalgic fool but I honestly tend to prefer the original game.

In terms of gameplay, Streets of Rage 2 is objectively the more polished product. But similar to Donkey Kong Country and Donkey Kong Country 2: Diddy’s Kong Quest, despite being the slightly inferior game, I actually prefer the first one. I know I’m in the minority but oh well. You like what you like!

For decades, gamers have been clamoring for a Streets of Rage 4. There were rumors nearly 20 years ago that such a sequel might appear on the Dreamcast but that dream was shattered in short order. However, just a few days ago on August 27, 2018, the announcement was made official… Streets of Rage 4 is finally happening after all these years! A teaser trailer was released and fan reaction is a mixed bag. Personally, I’m not a fan of the art style but I’m going to keep an open mind and wait to play it until I cast judgment. One thing is for sure, it’s just nice to see Streets of Rage 4 happening at long last. Here’s hoping it does the franchise proud like Sonic Mania did for Sonic the Hedgehog! 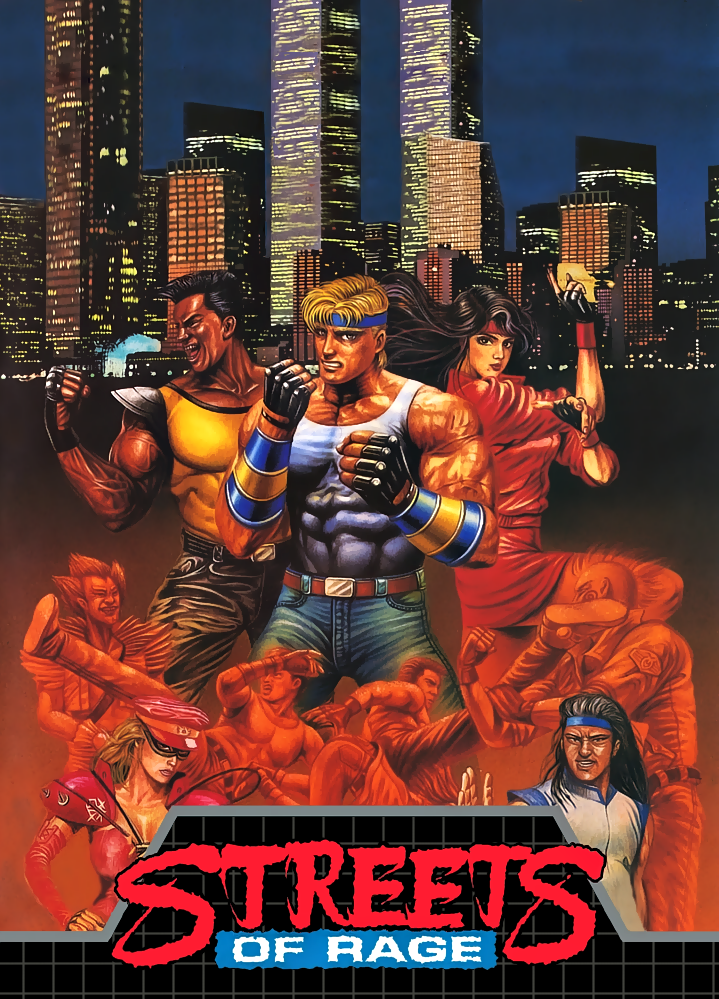 Streets of Rage was well received for its time. It was seen by many as not only a very competent Final Fight clone, but some even viewed it as superior, especially when you compare the Genesis game to the SNES port of Final Fight (which was butchered without question). However, some gamers feel Streets of Rage doesn’t hold up quite as well today as it did in 1991. I can see this perspective but I still get a kick out of this game whenever I play it. 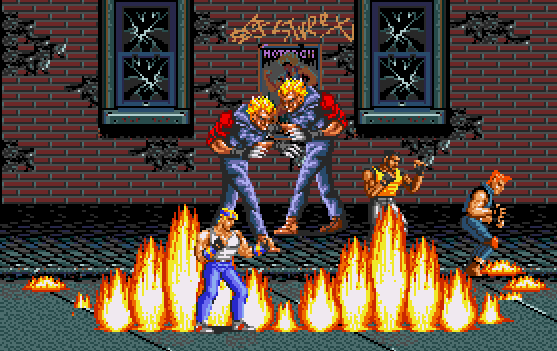 One of my favorite Genesis games back in the day was Streets of Rage, and I still have a soft spot for it 27 years later. Playing it back in 1991 transported my best friend Nelson and I, two young regular 8 year old boys, into the baddest ass kicking warriors this side of town. In fact, one of my fondest memories that Christmas season was playing Streets of Rage at Nelson’s house while his family was hosting a party. I remember Nelson’s uncles were there; I used to look up to them because I thought they were so cool. That night we fired up Streets of Rage on the ol’ Genny and I remember all the uncles in the living room stopped what they were doing to watch us play. They too were entranced by the simple beauty that was Streets of Rage. 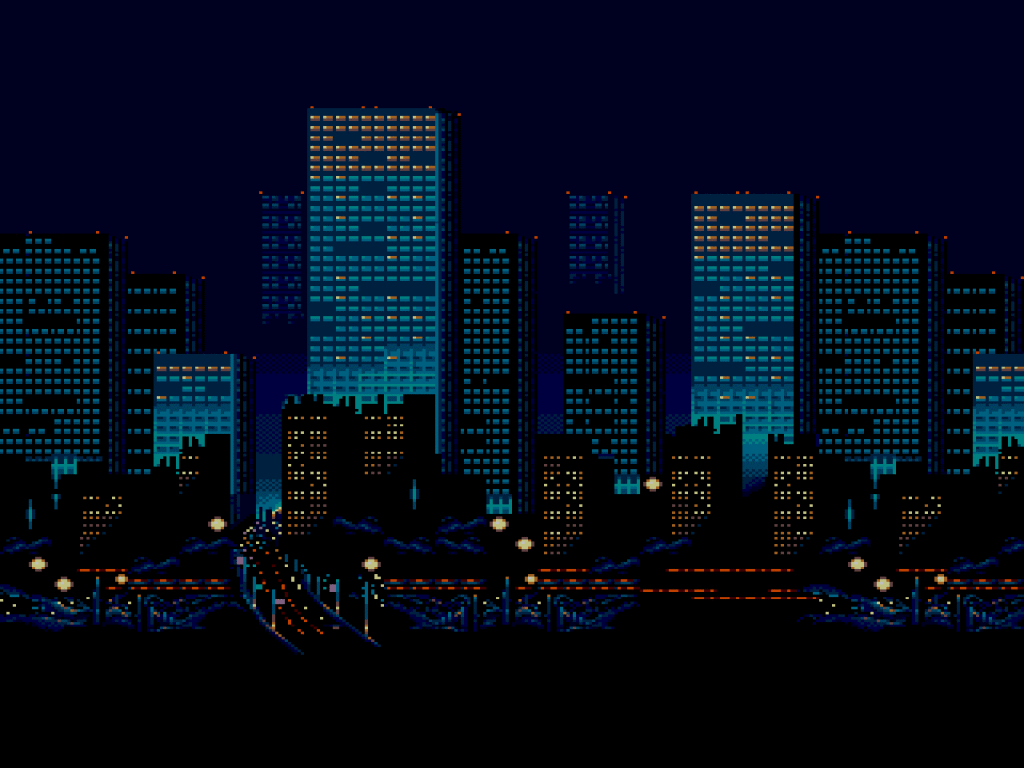 And I still remember to this day feeling so high and alive. Feeling that Nelson and I, along with Streets of Rage, became the smash hit of the party. It was the coolest feeling an 8 year old kid could experience at that point in his young life. It’s a feeling I wish I could bottle up because Nelson and I were floating on cloud 9 that night kicking ass and taking names, all as Nelly’s uncles watched on. There was something special about playing beat ‘em ups with your best pal growing up. And there was something extra special about playing a beat ‘em up the caliber of Streets of Rage with your best friend back in 1991. It was a moment in time that you just had to be there in order to grasp the full effect. The gritty visuals, the epic electronic dance music and just the overall feel of the game… Streets of Rage was and forever will be a special Genesis game.

4 thoughts on “Streets of Rage (Genesis)”