When I was searching for information on Spark World on the internet back in 2006, it (pardon the pun) shocked me there was nothing. Sure the game’s highly unoriginal, but it’s pretty good regardless, so I thought I’d find SOMETHING on it. I wasn’t expecting to find a full blown write up, but at least a blurb in a “Recommend me some good Super Famicom games” topic. There was nothing to be found. It’s sadly another case of an obscurity left lurking in the shadows. That’s a shame, so tonight let’s shine the spotlight on this little gem.

If Battle Cross was like Super Mario Kart meets Super Bomberman, with emphasis on the former, then Spark World is the same — only with the emphasis placed on the latter.

The story goes as follows:

In a distant world where intelligent cars rule, a shady casino operator who is actually a drug dealer casts his shadow over the alleys and streets. Two young cop cars, Beat and Barts, decide to take matters into their own hands (so to speak) when they learn that the police department is riddled with corruption by the syndicate boss. The intrepid pair must set off to points around the globe and blow up enemies by detonating fuel barrels. If you’re not in the mood to save the world you can always play against 3 friends (or computer controlled opponents in the battle mode). 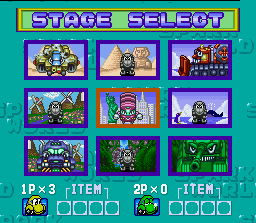 The story mode allows you to select any one of nine stages. Each stage has three zones with the fourth being the boss. 4-character passwords are given after each stage.

A look at some of the levels from the 1-player mode: 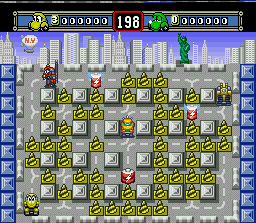 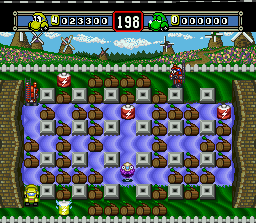 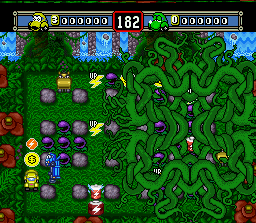 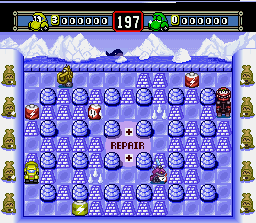 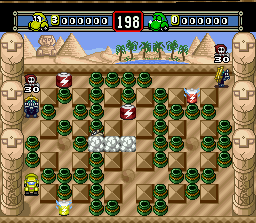 The classic themes are represented: jungle, river, ice, desert, etc. Each theme, as you can guess, is guarded by a boss.

The meat of the game, like Bomberman, is the battle mode with 12 selectable stages. Any combination of 2-4 players can play, and CPU AI is selectable from 1-9. You can set CPU 1 AI level nine, CPU 2 AI five and CPU 3 AI one if you so choose. Very user friendly.

And of course, by blowing blocks sky high, you reveal items that can either help or hinder. Longer sparks, more bombs dropped at a time, jelly bombs (I told you this game was highly unoriginal…), a boxing glove (though instead of punching bombs you punch the opponents — sweet), and so forth.

? marks are a HUGE gamble. If you get the bad side of it, a grim reaper appears over your head with a 30 second countdown. When it reaches 0, whoever has the icon dies. Luckily, you can transfer it to anyone you touch, and it can be passed back and forth until the timer reaches 0. It’s a riot making the switch to someone with 1 second to go!  *evil laughter*

There are no dinosaurs or animals here, but each player can sustain two hits.

Without further ado, let’s take a look at the battle zones. 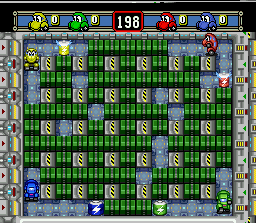 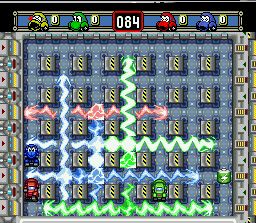 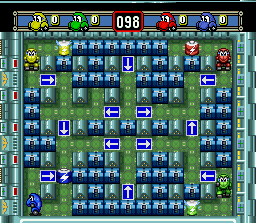 At first glance one might assume the arrows indicate where bombs go, but rather than completely ripping off Bomberman, the arrows actually indicate where YOU can go. Similar to the boxing glove, it’s this slight gimmick twist that goes a long way. 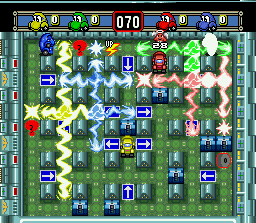 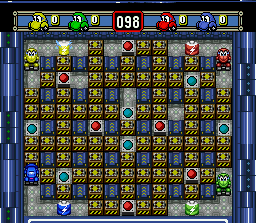 Red button = no pass. Blue = OK. The colors switch occasionally and shrewd timing is the key to surviving and creating traps. 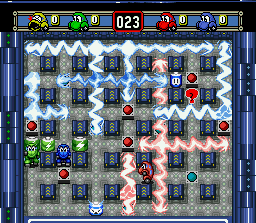 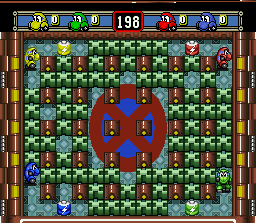 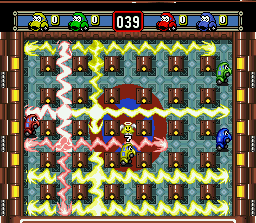 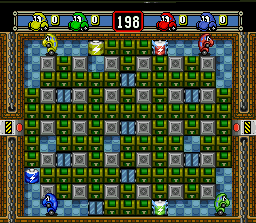 When the sides are bombed, the doors on the floor open up. Get called up to the big house if you fall through! 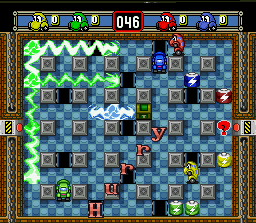 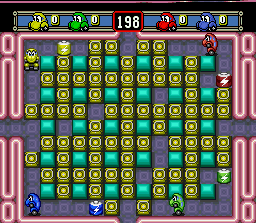 Ahh, the classic stage with 4 exit points. I love the look here. Unfortunately, the sparks will NOT go through the exit points, unlike Bomberman. Shame, but oh well. 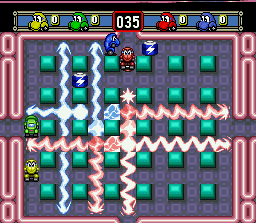 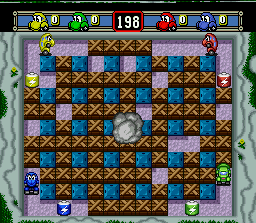 I love this stage’s design and gimmick. Once the boulder is free it’ll roll around the stage. Sparks influence its direction. Don’t let it crush you! There’s nothing better than blasting the giant rock right through your friend! 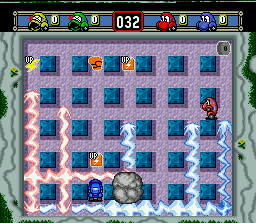 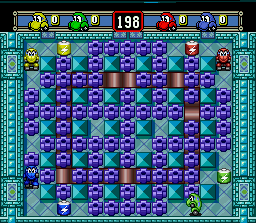 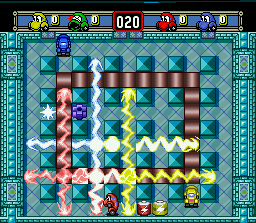 Note: battle zones 9-12 (not pictured) all have crazy gimmicks (i.e. gun placed in the middle, mega bombs, etc.) but they all use the same stage design.

You can set match victory to 1-5 matches much like Bomberman. The victory screen is a hoot… what the hell is victry? Whoops!

While Spark World is a rip-off through and through, it does have a sweet feature that draws the battle lines in the sand quite emphatically. At the end of a round the game lets you know who your “rival” is. That way you know exactly who to target specifically the following round. It gets wild and loony when one car kills all 3 of his or her opponents. You can form a temporary brotherhood and go after that rival the following round. Makes for some good times for sure.

So yeah, Spark World is a blatant Super Bomberman clone. But bloody hell if it ain’t a blast (sorry). There’s enough of a difference to make it more than a decent alternative. For example, I love that you can sustain two hits. It makes the battles last longer and gives you a chance at redemption rather than a one and done. Sure you can ride animals in the Bomberman titles but honestly I never liked them too much. Felt a little too gimmicky to me, personally. I also like that the boxing glove allows you to punch your opponents rather than punch fuel barrels. I mean, c’mon, does it really get any better than that?! Also, the arrows in battle zone two indicate where YOU can move, rather than your fuel barrels. It’s these slightly unique twists that add up to a slightly refreshing take. But my favorite thing might be that rival screen. Sure, you usually know full well who killed you, but that shot emphatically draws the battle line in the sand for the following round.

Of course it’s not better than the Super Bomberman titles but as far as clones go, this is an admirable and very solid effort. If you love these party games, definitely pick up Spark World. When the sparks get long the battles get really intense. It’s neat also how the spark color indicates who dropped the bomb(s). It’s just a fun game that I’m still playing even 10+ years later after buying it in 2006. Yet another unheralded semi-gem from the fascinating world of Super Famicom!