It is true that “chain” can be hard. Developer “Mint” knew this because they didn’t stray far from a much tried-and-true formula for their very first video game effort. In fact, they only made a total of three games. If you’ve never heard of the company Mint before, you’re not alone. Otoboke Ninja Colosseum can best be described as Bomberman with female ninjas. Sounds pretty good. But is it? Let’s take a closer look.

Rather than dropping bombs, you drop spiked capsules. But there’s an interesting twist here…

Two seconds later the capsule shatters, releasing four shurikens north, south, west and east (if not blocked by an obstacle).

OK, so it’s pretty much like Bomberman‘s bombs right? Hold on a second, playa…

If a shuriken connects, it stuns the player for two seconds, but they’re not yet eliminated. You’re only halfway home.

Only during a stunned state can the chain attack finish ‘em off. This is a cool twist because the stun doesn’t automatically guarantee defeat. The other player still has to connect with their chain ball. Battles get intense when you escape the grip of death by mere nanoseconds. It’s also incredibly satisfying to manually twist your chain around from far away. Some of the chain twists can get pretty nuts!

It’s this little quirk and change in gameplay that makes this Bomberman clone stand out from the crowd. In four player battles you can hide in the shadows and wait for the other players to stun each other, and then you can unleash your chain. You can technically win a match by only using the chain attack and never having to lay down a spiked capsule. This adds a natural built-in devious and vulture-like atmosphere that works really well with three friends in tow. Being able to wait in the weeds and eliminate someone seemingly out of nowhere is damn good stuff.

So gone is the “Damnit! I accidentally killed myself in the first three seconds” syndrome. Plus the chain attack is ace. It can be manipulated to curve around corners and, when prolonged, is quite an amazing sight. Not to mention really fun to control. More on this later… 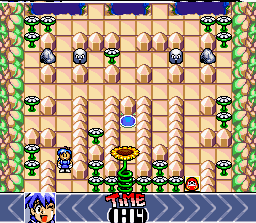 It’s decent enough, but definitely not the meat and potatoes of the game. It does sport kind of an anime look, though, which is pretty interesting, although the visuals are a little on the bland side. It doesn’t come off as a 1995 SNES game. In fact it looks more like a Genesis title from 1993 (no offense to the Sega Genesis). It just has that Mega Drive look to it, know what I mean? 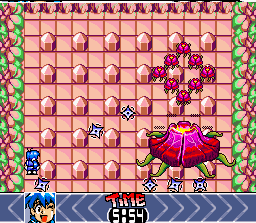 I forged ahead, hoping things would pick up a bit. And it did at the first boss.

The second world was a lot more interesting with more puzzles to solve instead of just laying spiked capsules and high-tailing it. They’re not yet mind-bending but it’s still early. Here is the first “puzzle” you’ll encounter: 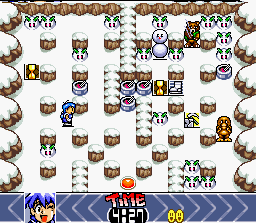 To beat a stage you must first clear every bad guy. Three unbreakable blocks halt your progress here.

Use your chain to pull those three blocks out one by one. 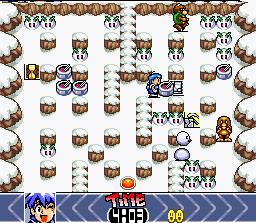 Now with one block remaining, you’re able to push through it and unleash hell on all them fools.

Like I said, not taxing but a lot more satisfying than the wide open. Later on, teleports come into play and the puzzles get rather perplexing. 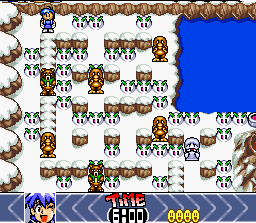 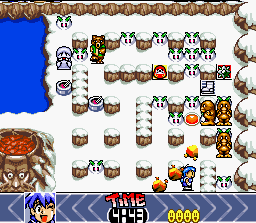 The next snow stage is very nice. I love little details like that creepy, possessed-looking volcano face launching fireballs without mercy — awesome. Watch the shadows of these on-coming fireballs and skidaddle!

By the way, the volcano baddie reminds me of GAROKK from X-Men fame… in his rocky prison form. 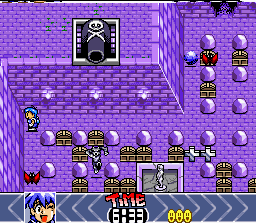 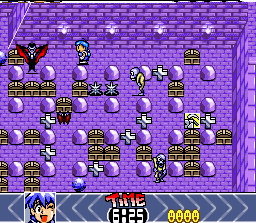 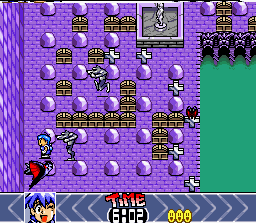 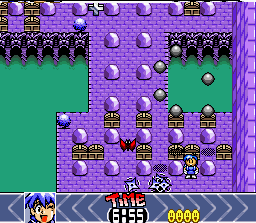 The haunted theme is the best. Contend with bats, vampires, ghoulish skeletons and super quick werewolves. Check out this sick 2×2 screen level!

FOUR-PLAY GETS ME GOING

Feeling quite satisfied with the one player mode now, which went from meh to hey that’s not so bad, the four player battle mode is the meat of any Bomberman type game. The one player mode was never anything more than a bonus, a frill, a silk handkerchief in the breast pocket of the game’s velvet regalia.

Power-ups are always important to these games. Otoboke has some of the coolest you’ll find anywhere. A list of some:

Etc. Everyone starts with a full screen chain and shurikens which also travel the full length of the screen, not to mention the ability to drop two spiked capsules right off the bat. This makes it a bit more chaotic than Bomberman from the get-go at least. There’s an emphasis on being offensive-minded. You have to watch your back from jump street as everyone starts out pretty strong even in their default state. 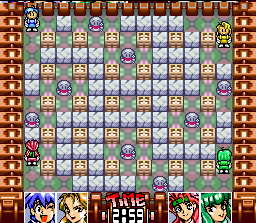 Your standard first stage. The snowmen are unbreakable and can be used defensively as shurikens can’t cut through them. The snowmen are pushable and your chain can pull them toward you as well. All but two battle zones have these movable barriers in some shape or form. 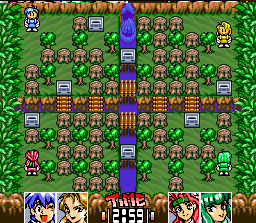 Each player has their own island waiting to be invaded. The cool thing here is, unless you use the bridge points, chains cannot stretch across islands, thus eliminating “cheap kills.” This stage effectively forces you to man up, er, woman up. This Colosseum separates the boys from the men. Er, the girls from the women. Ah you know what I mean! The Super Famicom barriers add a nice touch as well. 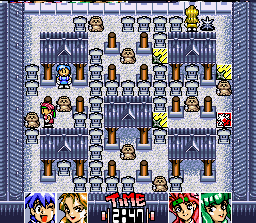 What would a game of this nature be without a roof / tunnel stage? Can you locate the green player? Not here you can, since she is taking shelter under one of the roof tops. This stage is full of Japanese culture — from the roofing style to the Tanuki statues. I always enjoy these tunnel type levels, where parts of the playing field is obscured by some kind of structure. It lends a fun hide and seek aspect to the game. 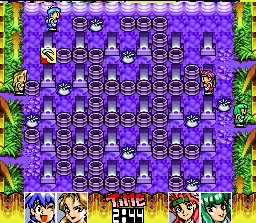 What else could make a game of this nature more complete? Of course, the stage with multiple exit points. The green player enjoys a blend-in advantage (see far right). Hey, sometimes it pays to be controller number four, eh? 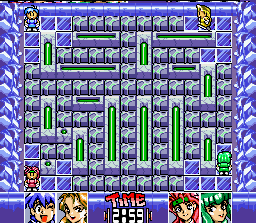 The green bars restrict certain movement. Sorry, not much else to say here. It’s not one of my favorite stages as it’s a bit dull both in concept and in terms of looks. One of the more forgettable battle zones. Not worthless, but not exactly as enticing as some of the others on tap. 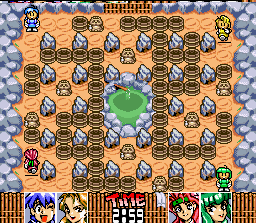 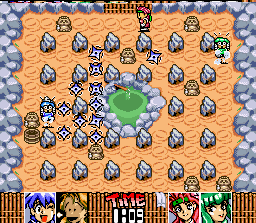 This one is unique because all spiked capsules dropped are invisible! Note the return of the Tanuki. The green pool in the middle there is aesthetically pleasing in a mystical, mythical fashion. See, this is what the previous Colosseum lacked. Just the smallest detail or graphical touch can really go a long way! It makes me wonder if the combatants took a sip of the water before the match and thus were granted the super power of having invisible spiked capsules. All thanks to one small graphical detail ^_^ 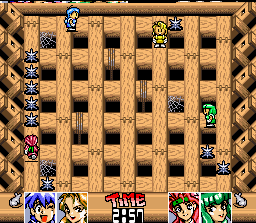 It’s the super power war zone. Each player begins with the ability to drop five spiked capsules and there are no obstacles! Only the strongest will survive here.

You can’t fall through those holes by the way. Whew! 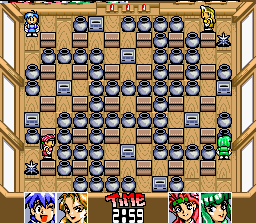 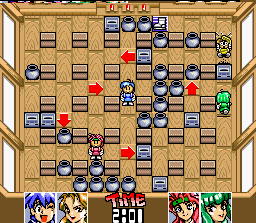 At a cursory glance you wouldn’t know the gimmick here. However, play for a bit and arrows are soon revealed. Determines where shurikens travel? Nope. The arrows directs where your CHAIN can go. A nice variation on top of a nice variation. The Super Famicom barriers make a return because they’re awesome. 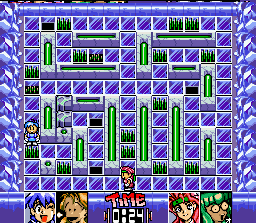 When the clock runs down to 30 seconds, spikes crop up. If you come into contact with the spikes then you’re stunned a la the shurikens. Also, you lose if you fall through the holes. An interesting variation on Bomberman‘s falling blocks.

Check out some of the cool things you can do with that ole chain ball:

Nothing’s quite as sweet as lurking in the shadows waiting for others to do the dirty work. As soon as you find a stunned opponent, send the chain ball twisting and curving some twenty feet away — it makes for great enemies and “Ooooh-I’ll-get-you-next-round!” battles.

The feeling of surviving by the skin of your teeth as the chain comes your way JUST as you recover from your slumber is equally a great high, and on the flip side, morally deflating.

Otoboke lacks the finishing touches and isn’t nearly as customizable as the Bomberman games. There’s no option for CPU AI — the default AI is laughably horrible. There’s no tag team option. Thankfully the rest is status quo: pick between 2-4 players (from a character choice of four females), 1-5 wins and any one of the eight Colosseums.

Graphically, it’s a bit weaker than the SNES Bomberman games (which were no visual tour-de-forces themselves). The music can get annoying at times. Control is a bit “stickier” than the Bomberman games.

What I mean by that is you can’t readjust your position when “waiting.” You know how you drop a bomb in Bomberman, go hide in a safe corner and can face north, south, west or east to ready yourself for your next movement? In Otoboke if you go in facing east, you can’t turn west without moving out of your safe position. Maybe hard to understand in text, but you’ll see what I mean if you play it. This forces you to have greater wherewithal to compensate for a flaw that shouldn’t be there in the first place. It’s not a deal breaker in my opinion, but diehard Bomberman fans will take notice of this change and be quickly forced to adjust their playing style.

Despite the flaws listed above, I love Otoboke Ninja Colosseum. It plays enough like Bomberman to provide you with that sense of comforting familiarity, yet it throws some curveballs at you to keep you on your toes and makes this a game worth playing rather than that lingering thought creeping into your head: “I would much rather play Bomberman.” Otoboke does just enough to separate itself from Bomberman that it makes owning both games more than worth it. One of the better Super Famicom imports and one of the best four player games on the SNES, Otoboke Ninja Colosseum is a quirky little gem.