Often considered one of the greatest American writers of classic literature, John Steinbeck is an author I made a point to finally read in 2021. He’s most well known for writing The Grapes of Wrath, East of Eden and Of Mice and Men. I might have read the latter in high school, but I can’t remember if I truly did or not. Weighing in at a scant 107 pages, it’s more of a novella (a short novel or a long short story) and was the perfect candidate following my reading of Stephen King’s 1,000+ page tome, 11/22/63. Not to mention Of Mice and Men was referenced in 11/22/63. Combined with my desire to start going through Steinbeck’s catalog, the decision was easy. The cover you see above was published in the fall of 1993, but Steinbeck wrote it in 1937. It’s a classic for a reason, and because of how brief and to the point it is, it’s one of those timeless books I can see myself rereading every couple years or so. 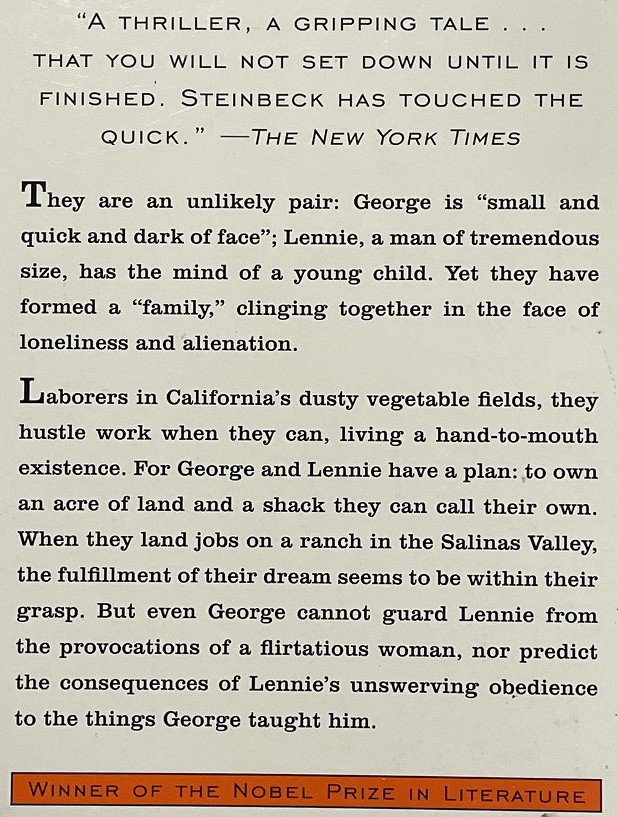 Taking place in California’s dusty vegetable fields during the Great Depression, Of Mice and Men follows the journey of George Milton and Lennie Small as they travel from place to place looking for work. Steinbeck does a fantastic job exploring the themes of loneliness, isolation and pie-in-the-sky dreams that may or may not ever come to fruition. It’s a harrowing look at how fast things can snowball and how the line between hope and delusion can quickly blur before you know it. 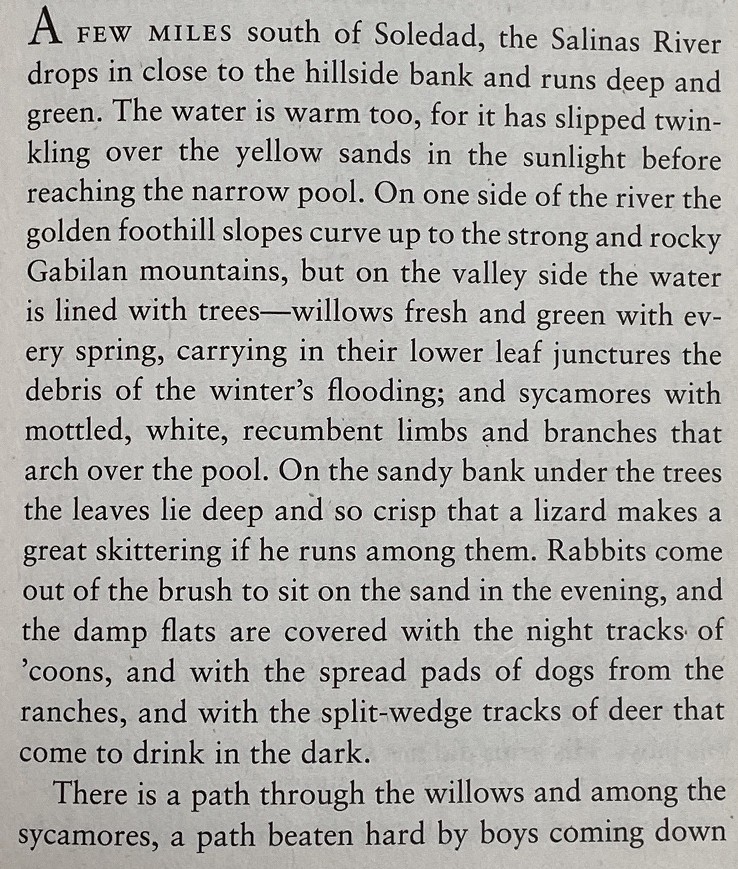 The story sets the mood right off the bat by painting a picture in the reader’s mind of rolling hillsides, green pastures, sparkling brooks and woodland creatures milling lazily about. The land is beautiful, holding much potential to cultivate and harvest, but you also get this niggling sense that the land is so vast that man can easily become lost in its grandeur. 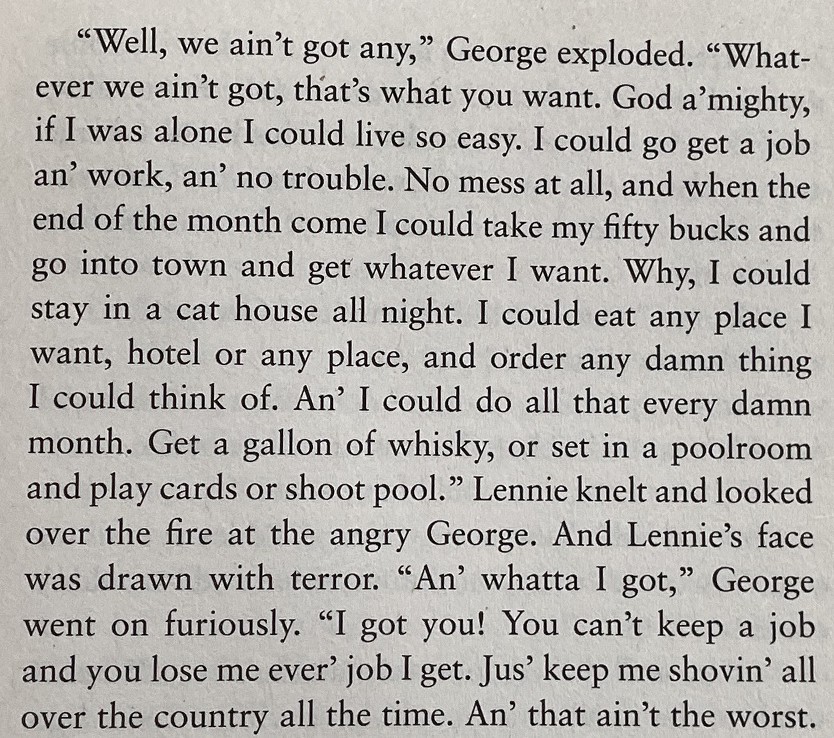 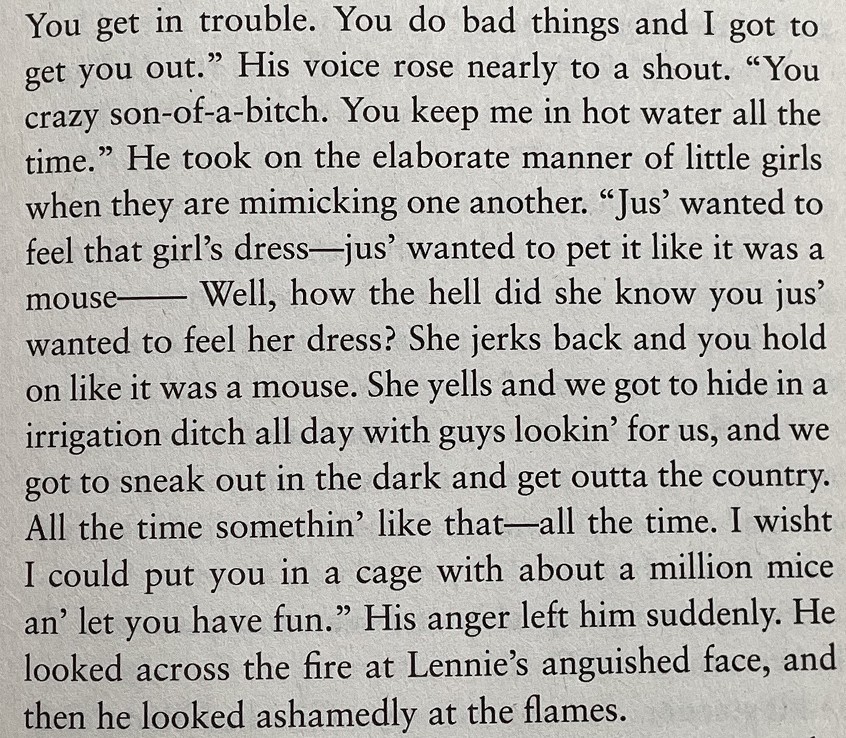 We quickly learn that George runs the show while Lennie is a dim-witted giant who doesn’t know his own strength. George knows he’d be better off without Lennie dragging him down — Lennie’s constant lapses in judgment has gotten the two of them in plenty of hot water before. At the same time, George cares for the big lug and Lennie’s reliable companionship perhaps overrides whatever better lifestyle George could muster if he were on his own. George accepts this burden, for better or worse. He sure as hell isn’t shy to let Lennie have it, as seen above! 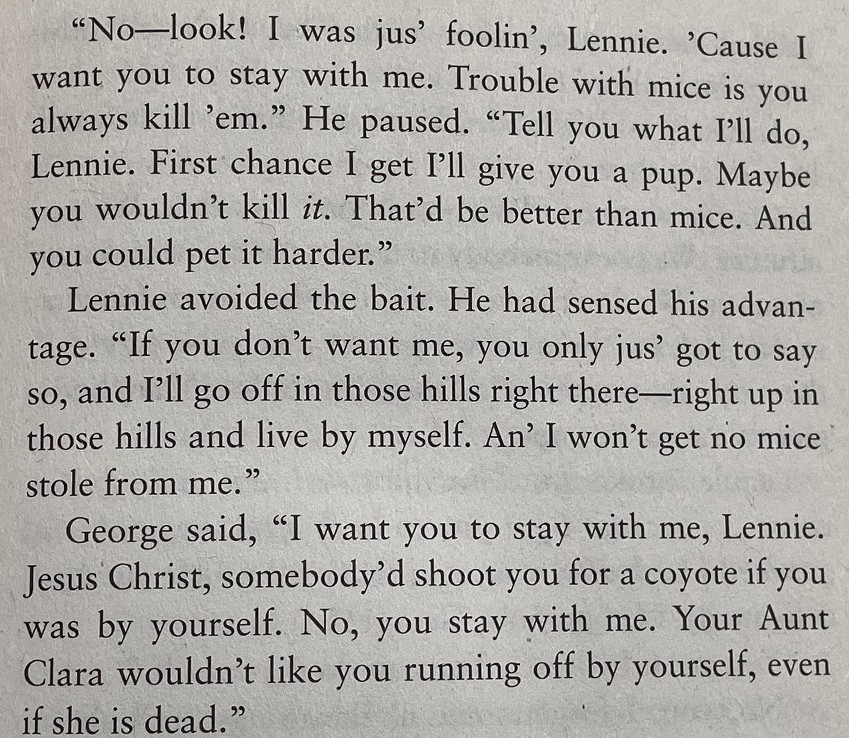 Lennie is well aware of the fact that he is a burden on George, even threatening multiple times to leave George once and for all so that George can be free and live the kind of life he deserves. But deep down, no matter how much trash talking and tongue lashing George does, he has a soft spot for the big guy and doesn’t want to go on without him.

Their chemistry and back and forth bickering leaps off the pages. They’re like an old married couple! The dialogue somehow feels real and relevant, even 80+ years later. A truly remarkable feat that speaks to Steinbeck’s talent. And I love the little description at the end there. Really paints a beautiful picture of the landscape in the cool of the evening. You can almost feel that little night breeze on the back of your neck. 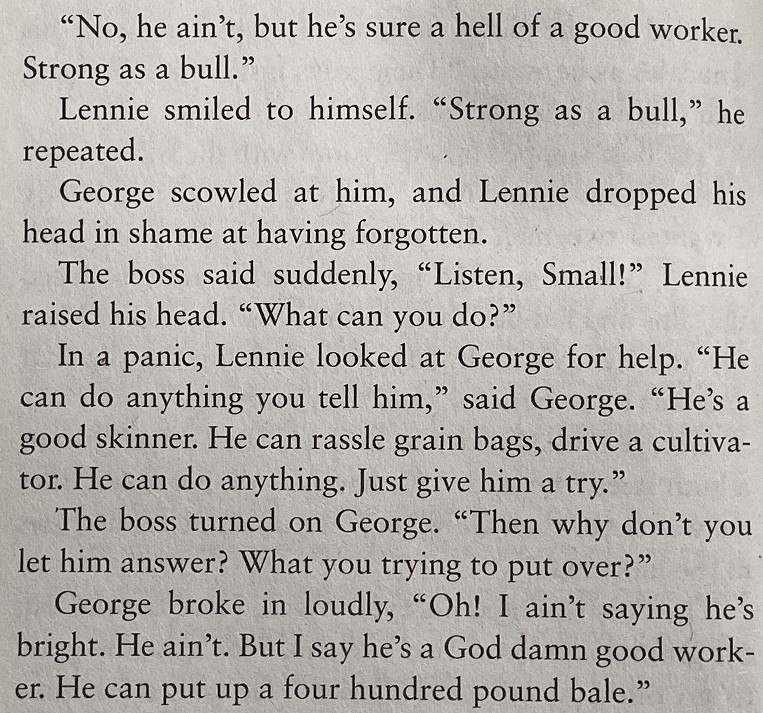 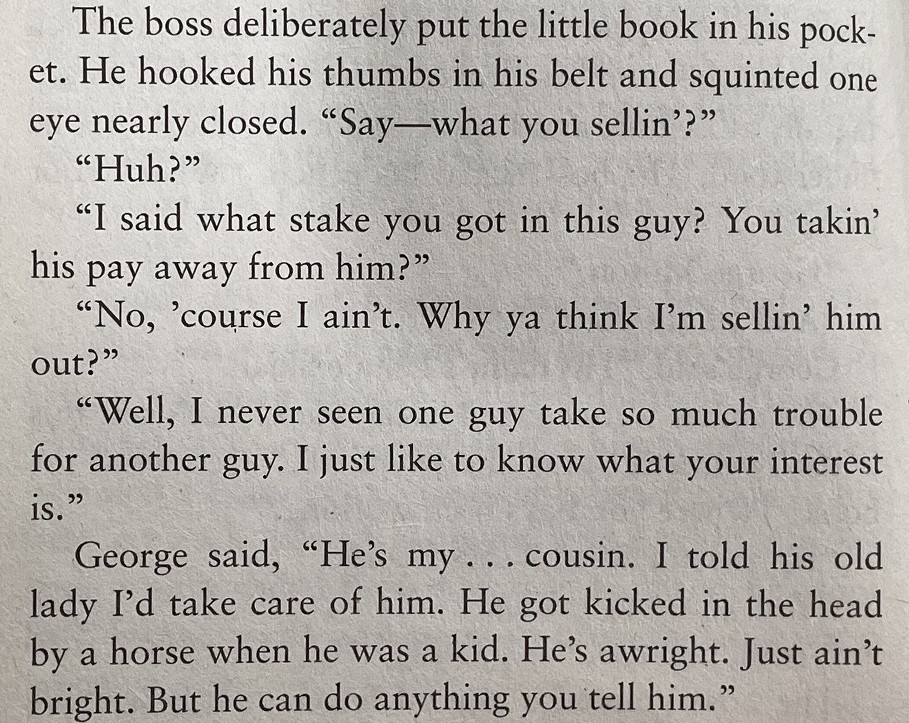 George is constantly sticking up for Lennie and fighting his battles. He’s every bit Lennie’s guardian as he is his companion — if not more. When the boss wants to hear Lennie speak for himself, rather than George being his mouthpiece at every turn, George lies and tells the boss they’re cousins. Later in that same chapter, Lennie says to George, “You said I was your cousin.” To which George hilariously replies, “Well, that was a lie. An’ I’m damn glad it was. If I was a relative of yours I’d shoot myself.” 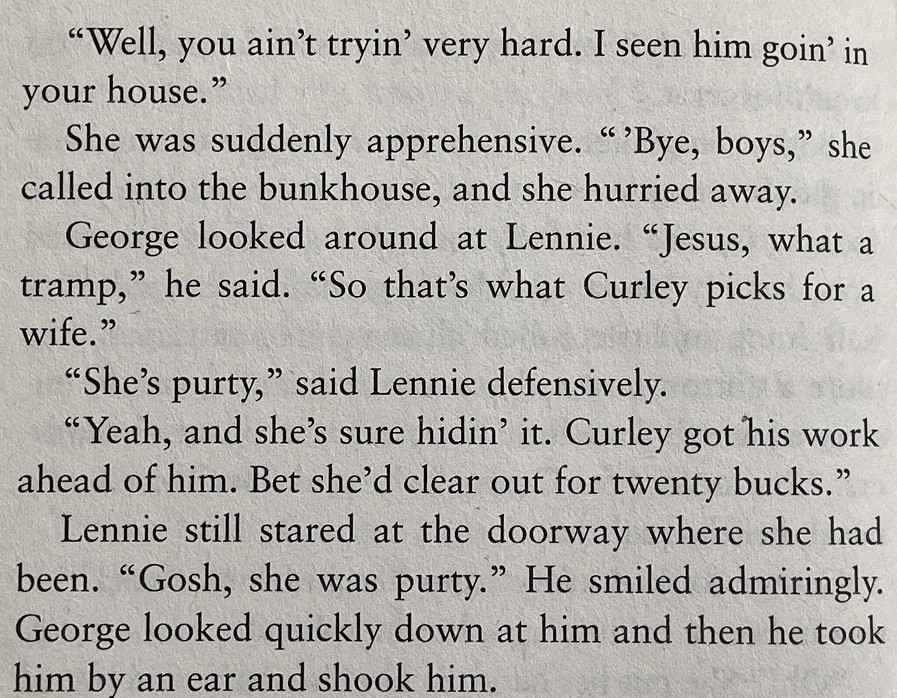 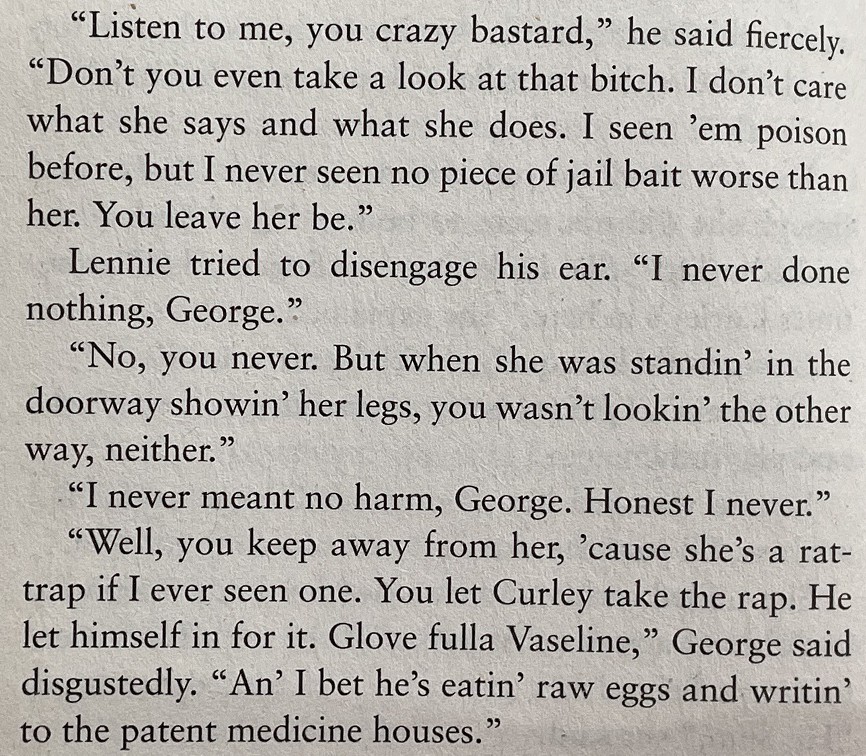 Curley’s wife is soon introduced, a floozy willing to put out for anyone with two legs. Lennie is a bit smitten by her, George quickly recognizes this and some entertaining dialogue ensues. 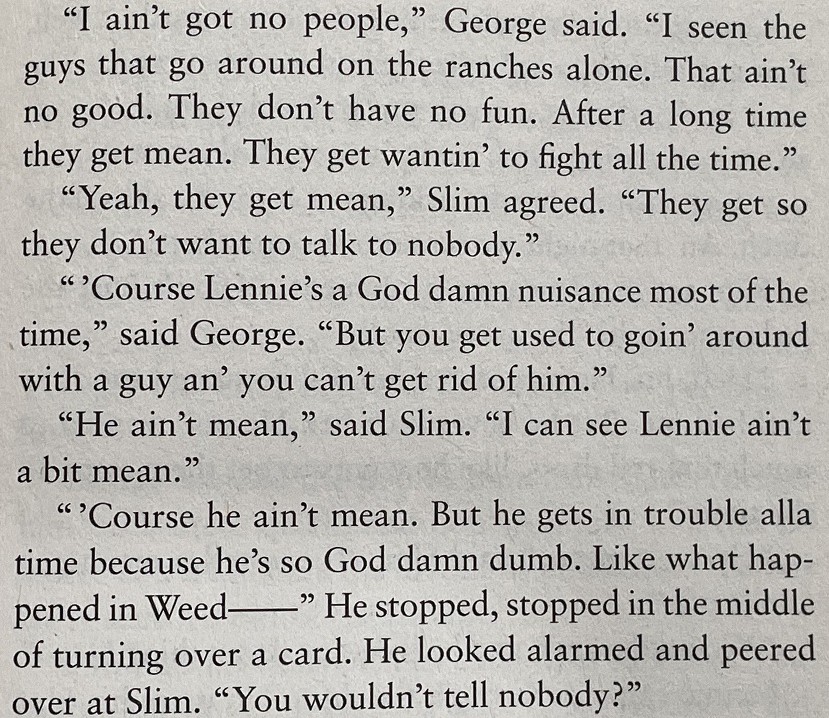 The theme of loneliness and isolation is well explored here, as George admits he ain’t got no one. How he sees so many guys up and down the road, just traveling by themselves, that they get so lonely and mean and want to throw fists all the time. He also admits that while Lennie is a nuisance more times than not, he wouldn’t know what to do without him. “But you get used to goin’ around with a guy an’ you can’t get rid of him.” With the underlying implication that he wouldn’t want to get rid of Lennie, even if he could. Some deep, powerful stuff there. 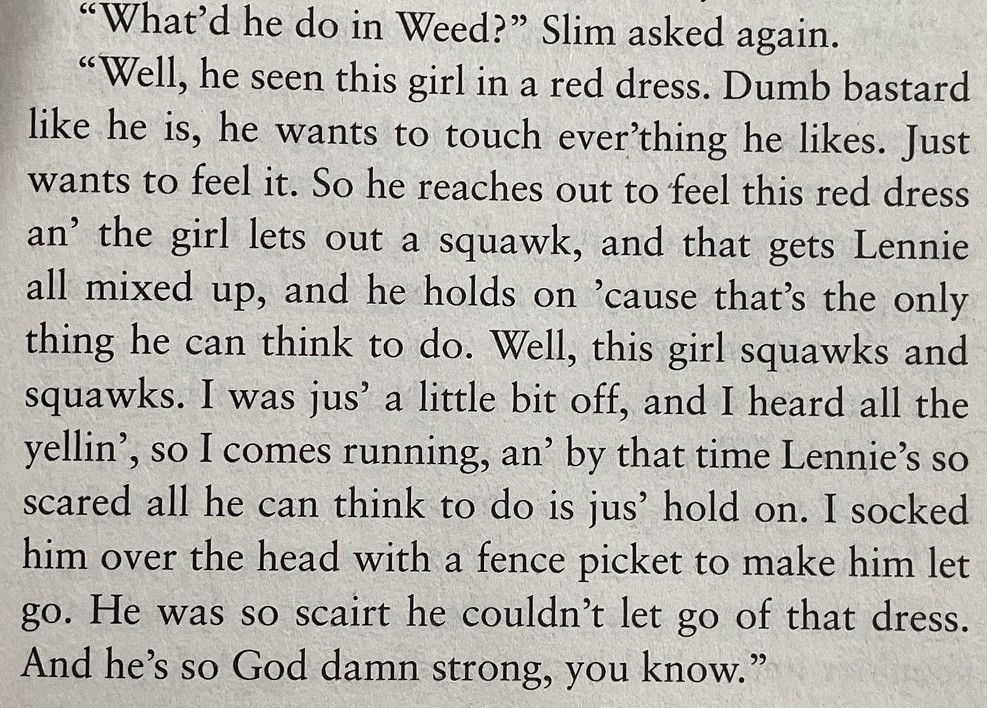 Slim asks George what happened in Weed, and George lets his guard down to tell. Yep, Lennie is no stranger to fucking up. 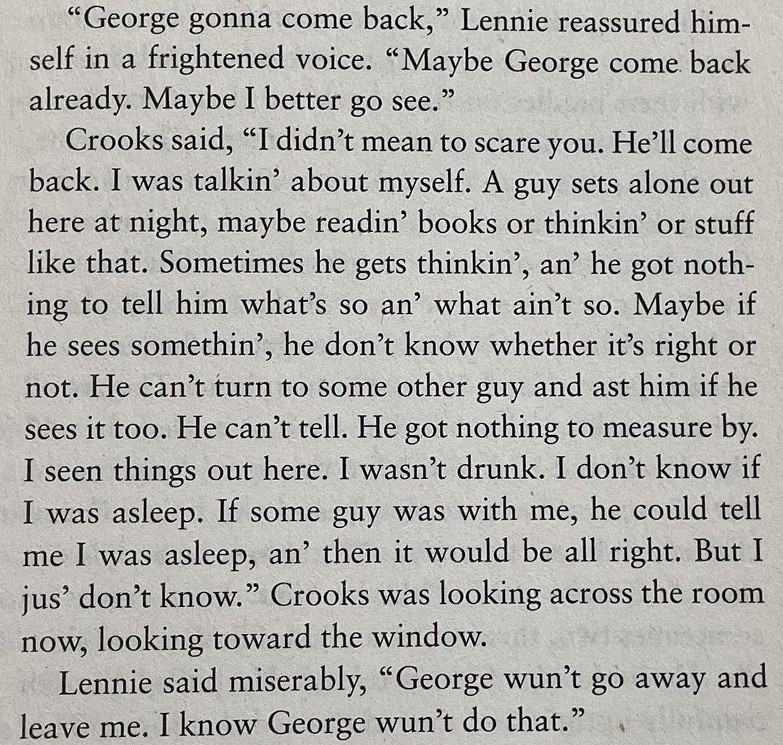 This is one of my favorite scenes from the book. The part where Crooks starts talking. It’s incredibly introspective and self-aware. And once again, the theme of isolation and loneliness pops up. 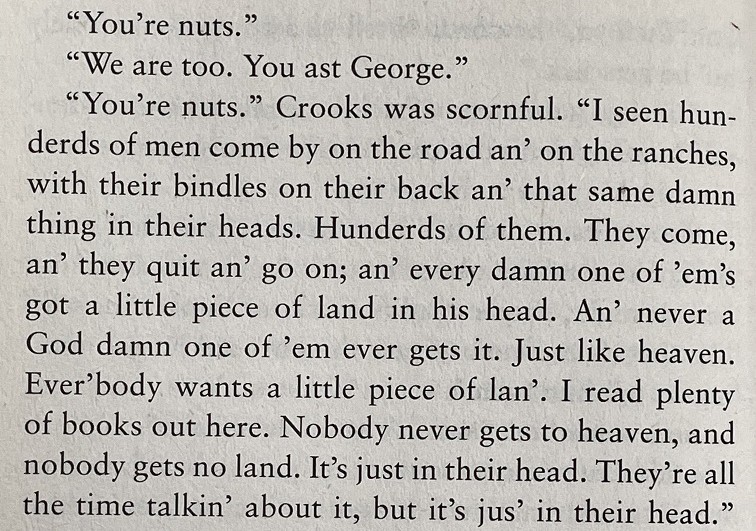 Crooks and Lennie share a poignant moment while George and the rest of the boys go to town. Lennie shares his dream of living off the fat of the land with George, and Crooks gives him a piece of his mind. Saying that he’s seen far too many guys walk this well beaten path before. Big delusional dreams that always amount to nothing. Melancholy is an understatement! Damn, Crooks, don’t hold back none now… 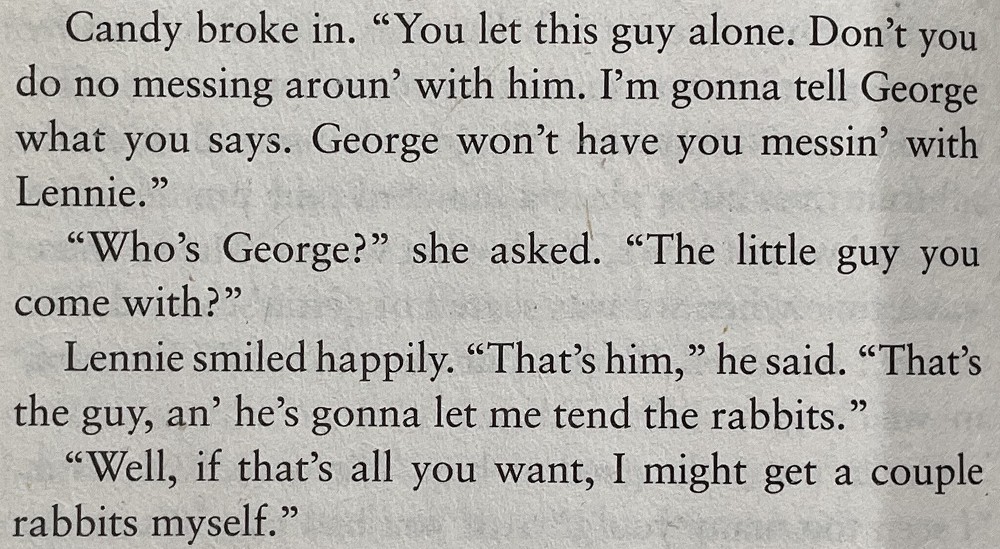 Eventually Curley’s wife pops by. Of course, she’s nothing but trouble with a capital T. Lennie tells her that George promises to let him tend the rabbits. The Jezebel has the audacity to say, “Well, if that’s all you want, I might get a couple rabbits myself.” OH! Zinger! I jumped in my seat and cried out, “GEORGIE BOY, WHERE ARE YOU WHEN WE NEED YA!?” Now that’s a sign a book has got you hook, line and sinker. 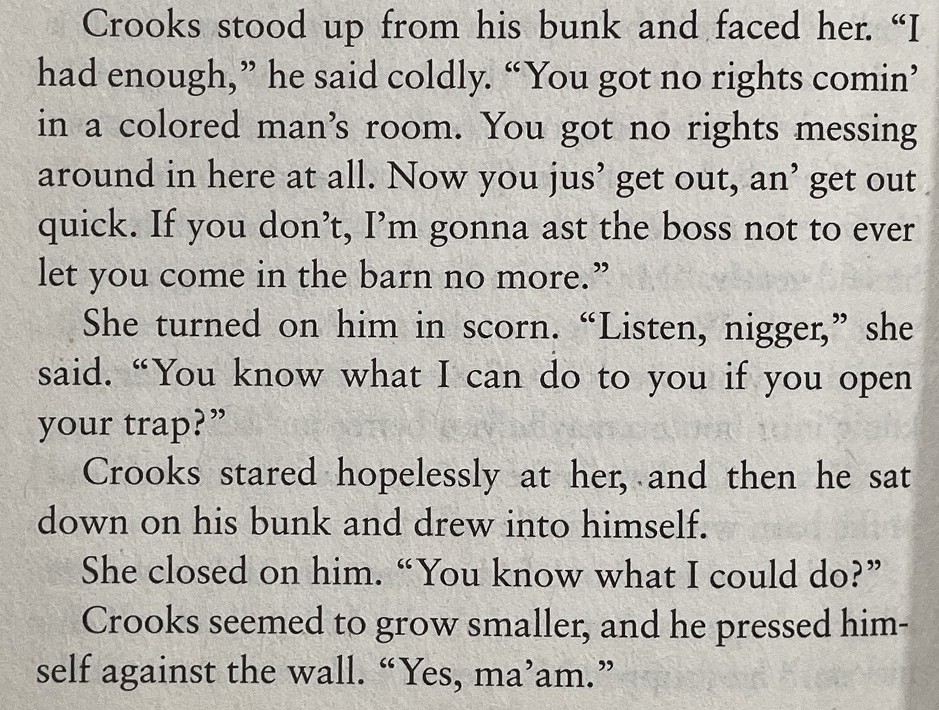 Crooks does his best to step in, but Curley’s wife quickly puts him in his place. Still, you can’t help but admire his effort. You also can’t help but feel bad for Crooks when he sits down, closes up and a deep resignation sinks in. There’s nothing more that he or anyone else can do to help Lennie. They all become prisoners of the moment, and the one in charge is a five year old toting a fully loaded gun. What happens next? If you haven’t read this book yet, I’ll leave it to you to find out on your own 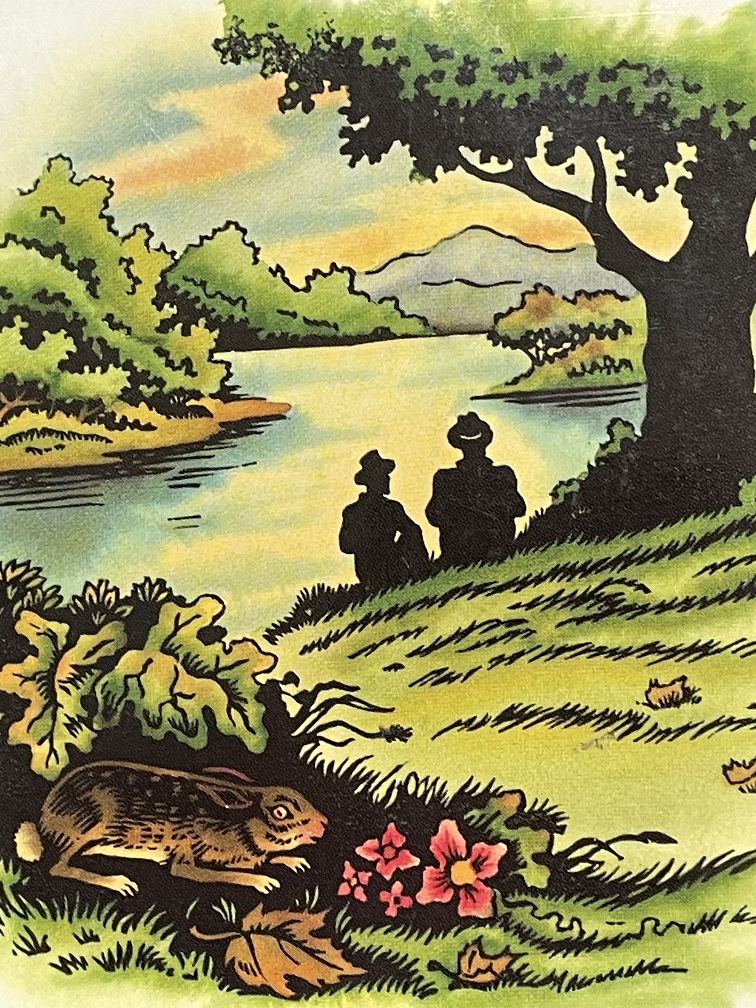 I read Of Mice and Men in one sitting , completely entertained and enthralled from beginning to end. The relationship dynamic between George and Lennie had me hooked from the beginning. The dialogue is a blast to read. Although a very simple and straightforward story, it is also quite deep and profound in many ways. Steinbeck wrote this masterpiece over 80 years ago yet it still resonates with countless readers to this very day, in spite of the changes that have occurred over the past 8+ decades. Some things, like loneliness and isolation, still affect (and plague) us in 2021 as much now as it did back then. It’s no wonder Of Mice and Men has this timeless feel to it. What is the fine line between hope and delusion? Does hope keep us going, even if it’s false hope? What happens when we chase something we know deep down will likely never come to fruition? Are we all just hamsters spinning endlessly in a wheel? The book is open for interpretation and discussion. I’ll leave it to you to form your own. I can’t wait to read Steinbeck’s other works, but I have a sneaky suspicion Of Mice and Men will be difficult to top. An all-time classic that begs to be read, and somehow remains relevant almost 85 years after it was written.

2 thoughts on “Of Mice and Men (John Steinbeck)”