Another in a long line of Japanese anime/manga turned Super Famicom video game adaptation, GeGeGe no Kitarō is one of the strangest SNES games you could ever encounter. It’s a side-scrolling shoot ‘em up platformer. Originally known as Kitarō of the Graveyard, the manga series made its debut in 1960, with an anime series following in 1968. The focus is on the last survivor of the Ghost Tribe, Kitarō, as he faces off with various ghouls and goblins of Japanese mythology. Created by Shigeru Mizuki, GeGeGe no Kitarō has a long and storied history spanning five decades, over 400 anime episodes and even two live action movie adaptations. 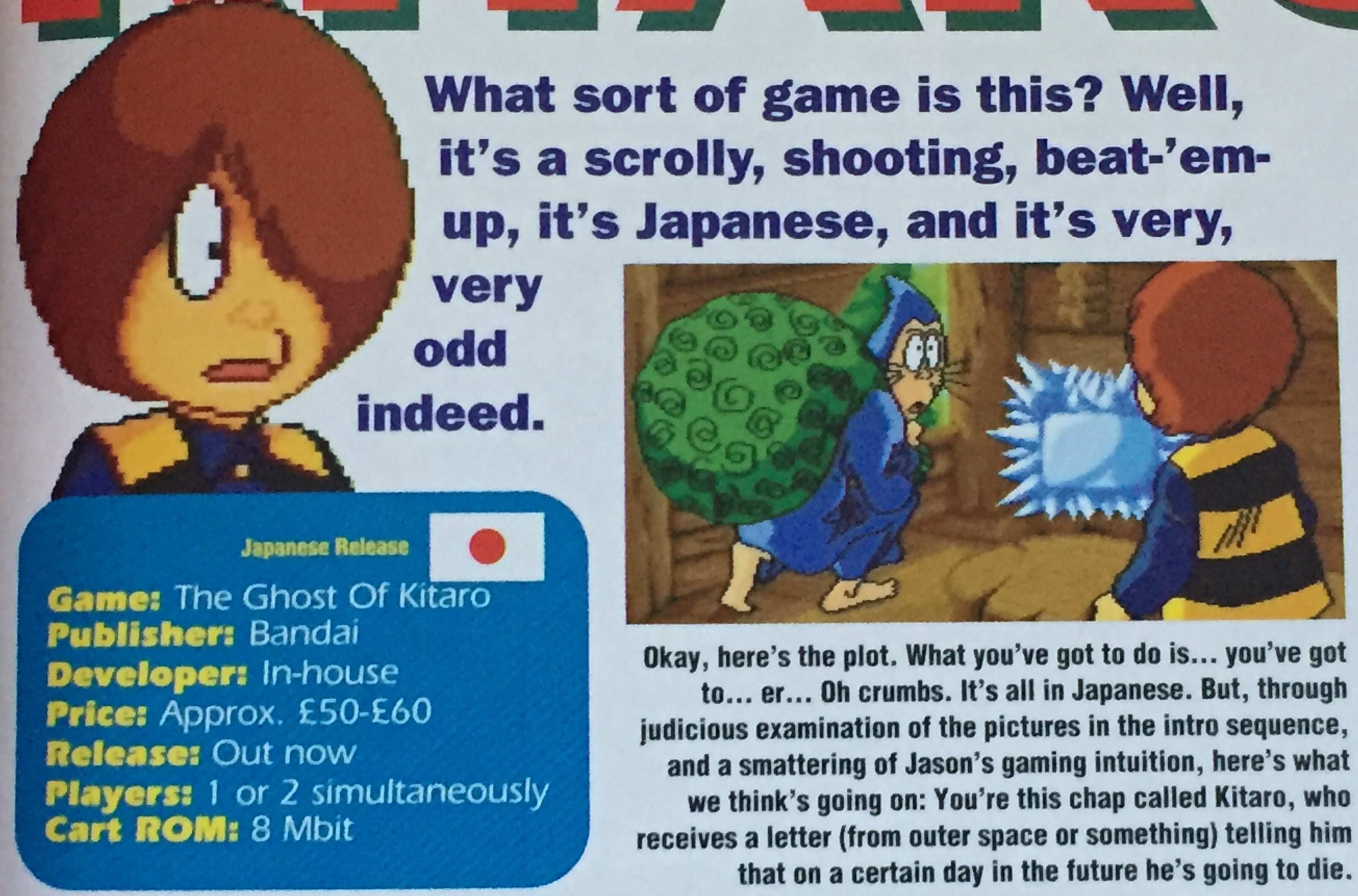 Kitarō has the ability to fire bullets from his hair. Of course, to make it even more bizarre, who does the firing but none other than his Eyeball Father! Unfortunately, bullets don’t travel the full length of the screen. Be prepared to meet many unusual abominations along your journey.

Kitarō has a shield to block projectiles with as well as three special weapons he can call upon. However, these special skills can only be used once you’ve killed a ghost creature and captured its soul. The more souls swiped, the more special moves you rack up. 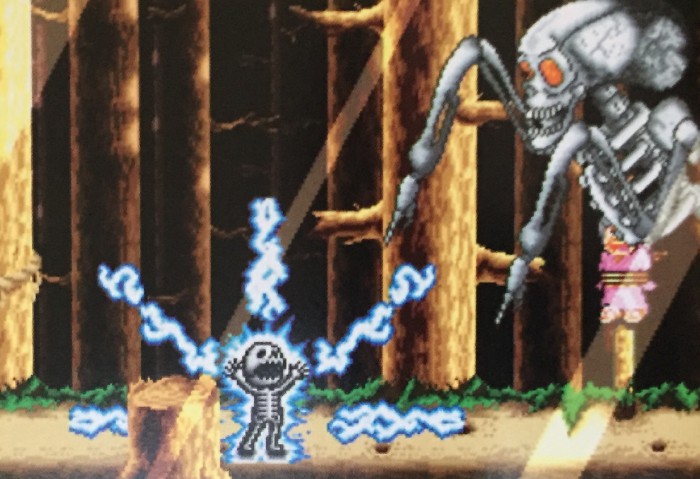 One special move is a cane like whip that is short and rather useless. Another is a sandal-based attack that goes across the bottom of the screen and back. The third is the BFG of the game. Multiple electric blasts are emitted from Kitarō’s body. It’s best saved for the bosses thanks to the high damage it inflicts. 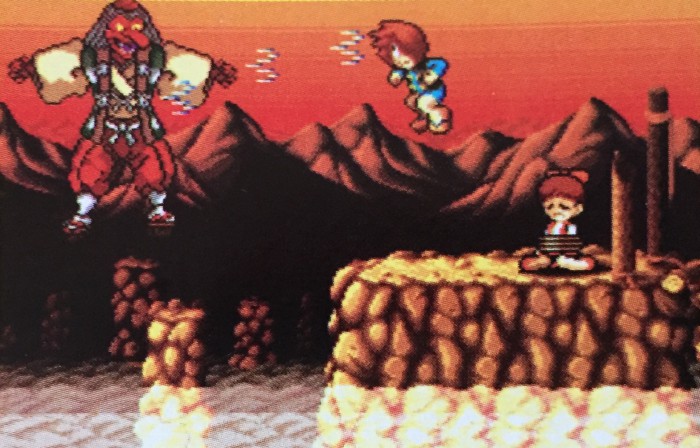 There are 19 levels, which may sound like a lot until you factor in just how insanely short each stage is. Deal with a few regular bad guys (some can be rather tough) and then it’s off to tackle the guardian boss. Some levels have as little as two (!) enemies before the boss fight. What the hell! I’ve never played a game as odd as this; the construction of the levels is a little baffling to say the least. 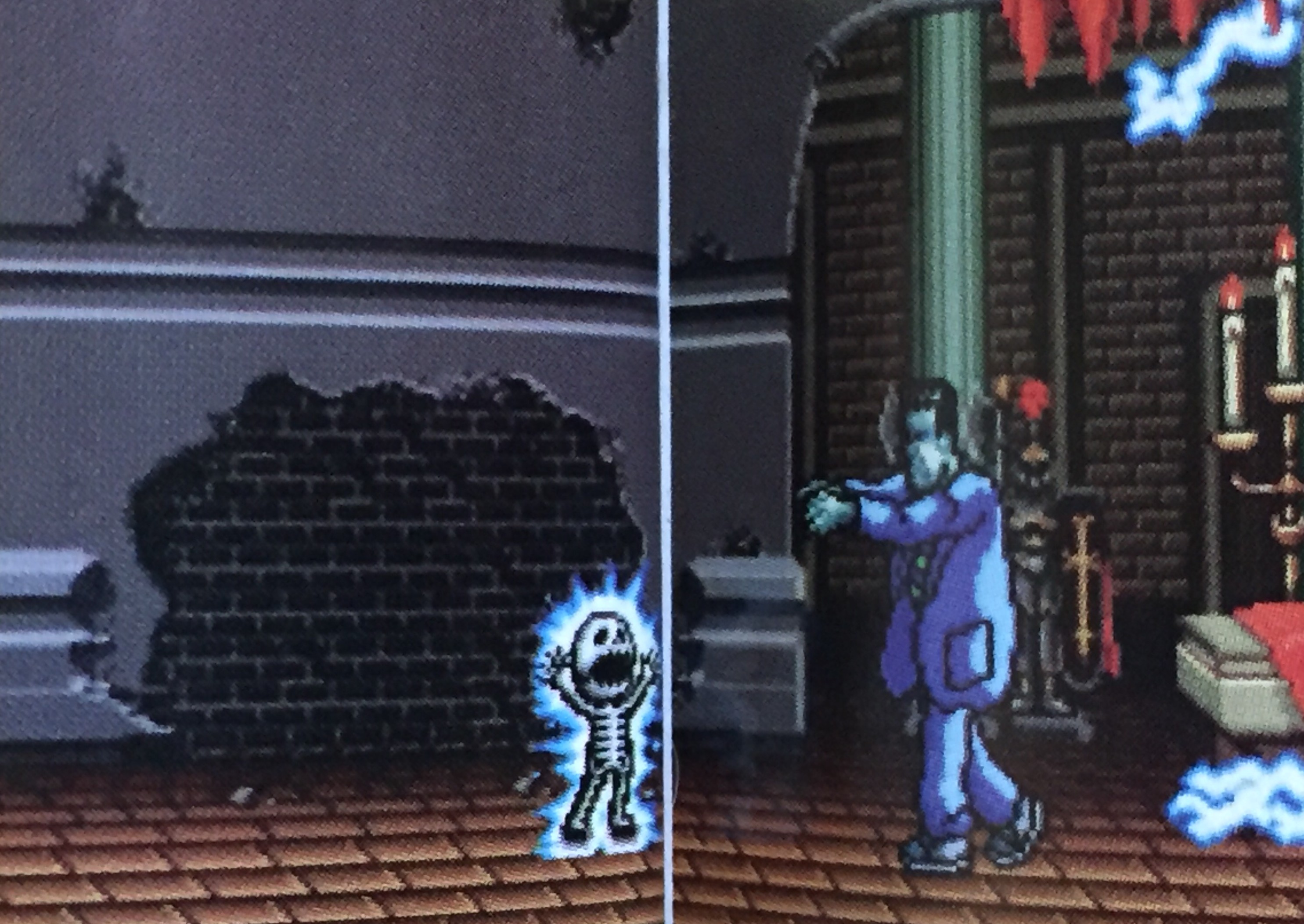 Some bosses include a witch with the power to change you into small random objects, a vampire in the form of a giant bat accompanied by a legion of bats and what’s a horror themed video game without Frankenstein represented in some form or fashion? 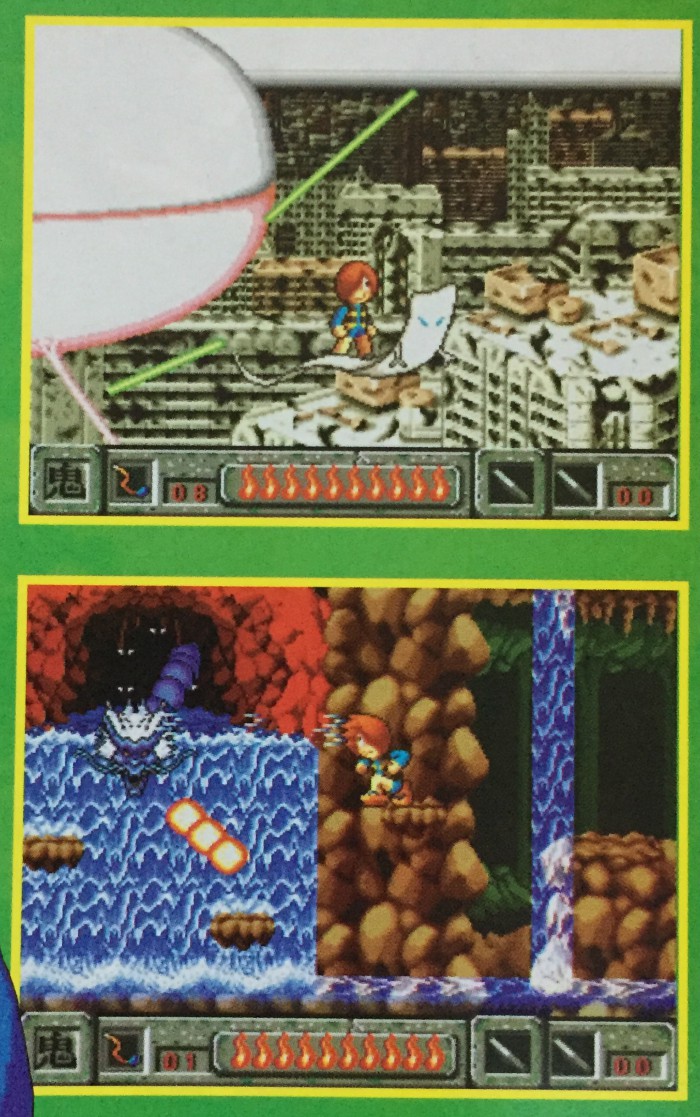 Also boss is a gigantic dragon who has 10 heads, but you face only one at a time. The dragon dwells in a dark cave set against a waterfall which makes for a lovely visual. 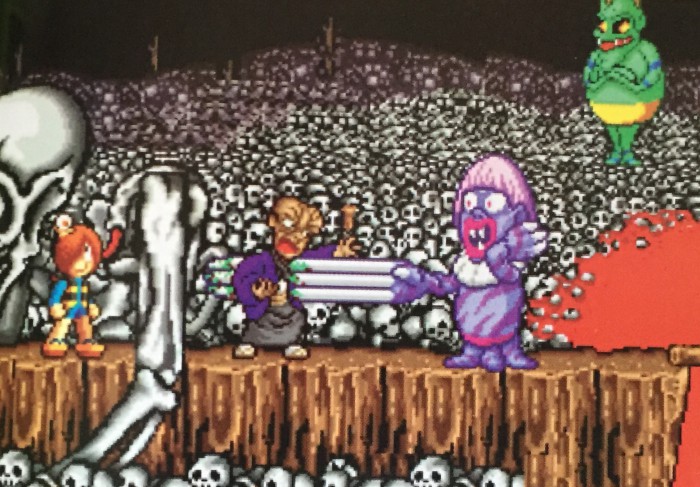 Don’t let the game’s Saturday morning cartoon look fool ya — even though there’s no blood anywhere to be found, GeGeGe no Kitarō has some unexpectedly vicious moments. One boss splits in half after being slain. Another one uses her razor-sharp claws to impale an innocent bystander through the heart! That definitely took me by surprise. 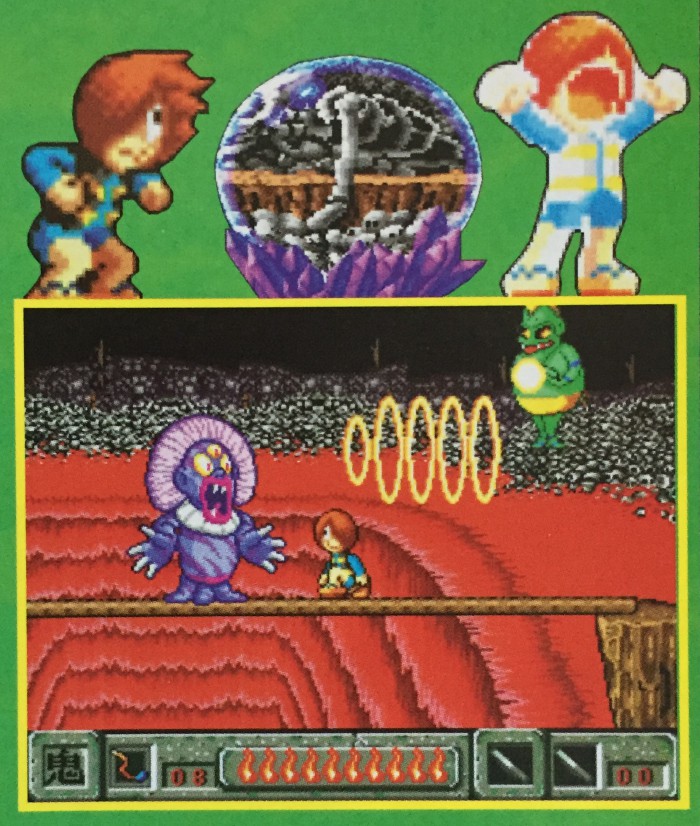 It’s a shame then how unfair the game can be at times. Certain levels have these tiny ass platforms… and if that weren’t annoying enough, spirits hound your ass like white on rice. As you can imagine, thanks to the ridiculously small ledges, you’ll likely fall to your death if touched. Also, you’ll make leaps of faith where you can’t even see the platform on the right until you jump. Only then does the screen scroll forward. In a game already as difficult as this one is, that’s just plain wrong. 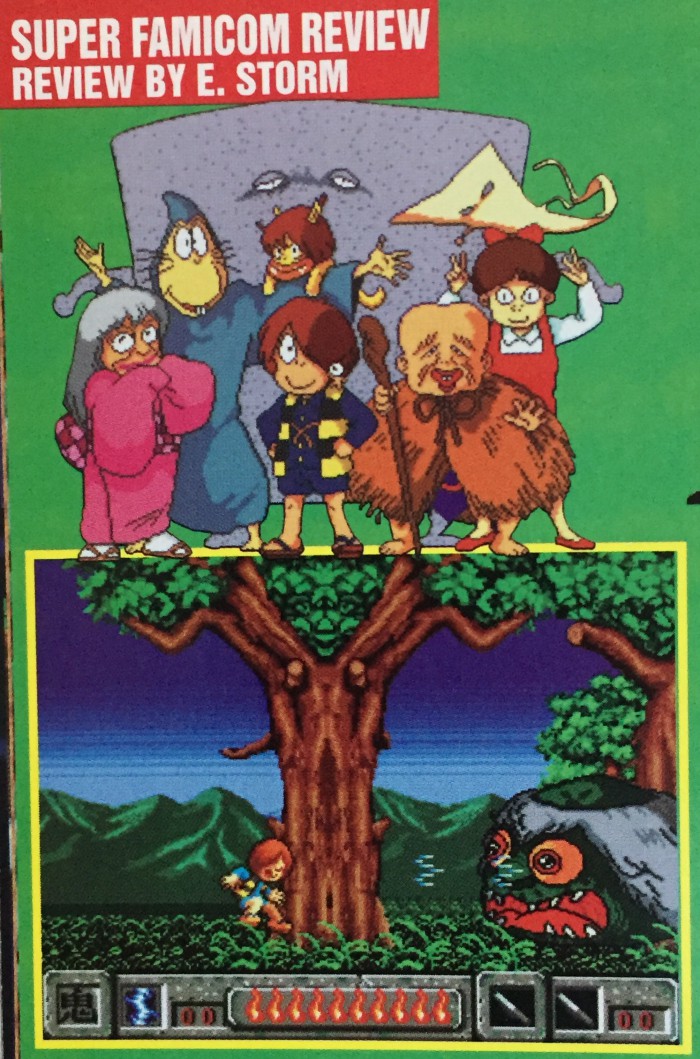 On the upside, the monsters are gruesome and highly memorable. The boss from the first level for instance is something you might see in Hayao Miyazaki’s work (Spirited Away). The graphics are excellent and invoke the feeling of watching Saturday morning cartoons. And the music has a nice oriental flare and gets rather creepy from time to time.

Another positive aspect is that it has a pretty cool 2-player mode. The second player controls a character who has a fireball similar to Sagat’s that travels the full length of the screen. With Kitarō blocking and the second player spamming fireballs, the game takes on new life. There are pictures and some Japanese text to advance the story after each level is beaten.

This very first villain requires several hits to kill and zips around like a mad flea.

Then this lady appears from behind the tree. Don’t get seduced…

Hey he looks pretty friendly. Let’s chat him up. What could go wrong? 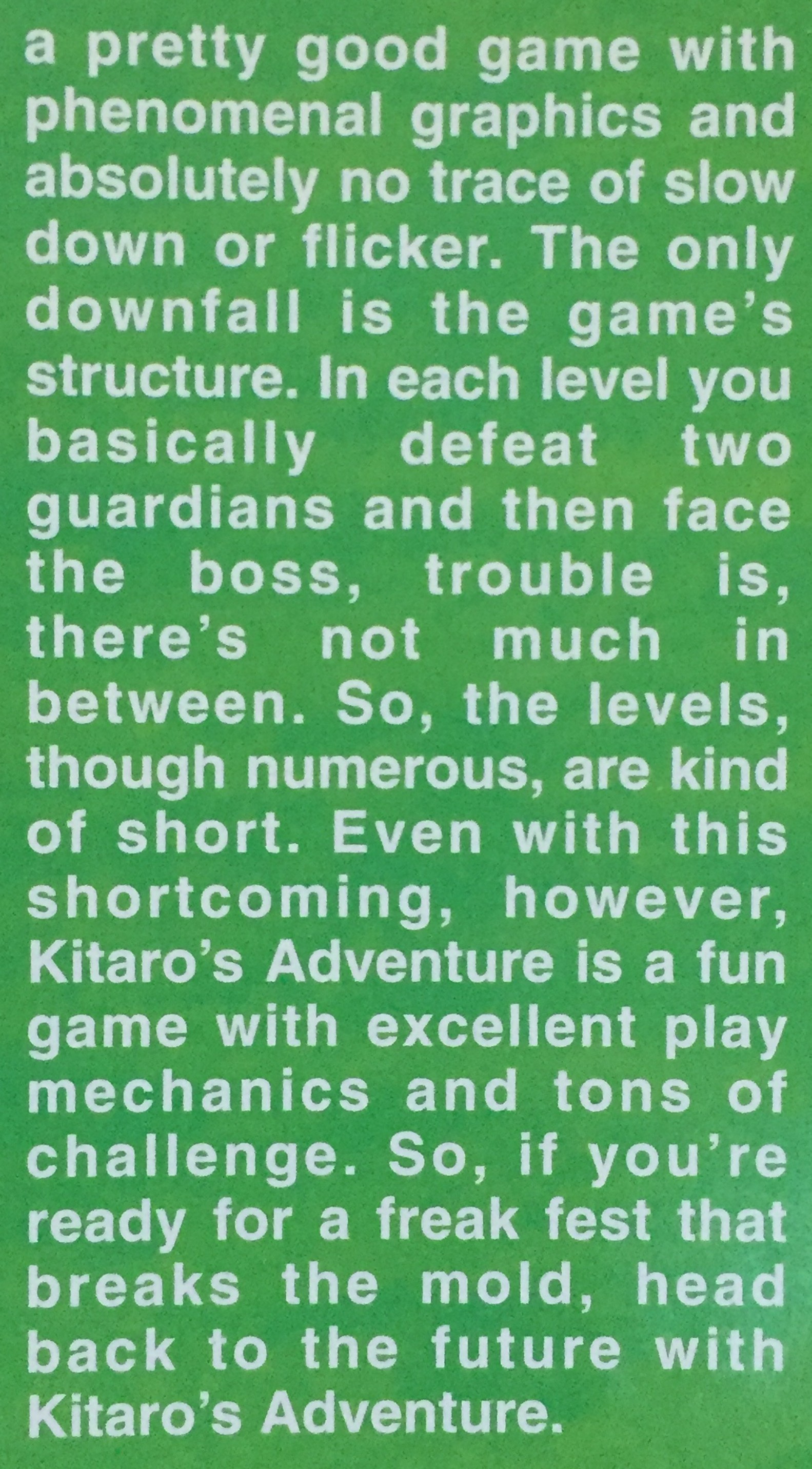 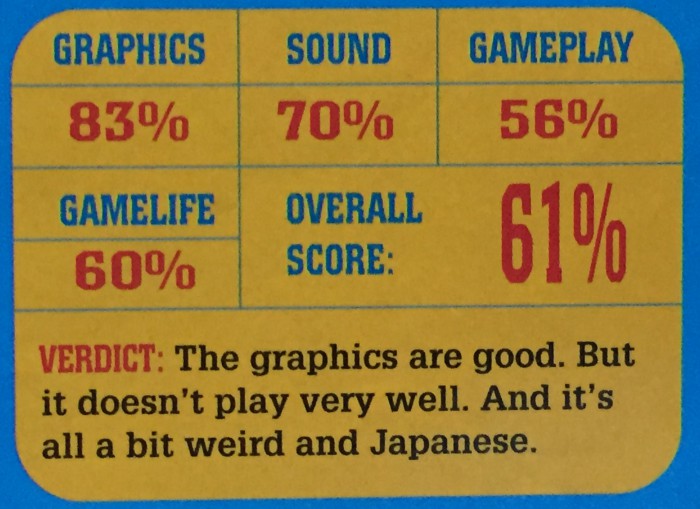 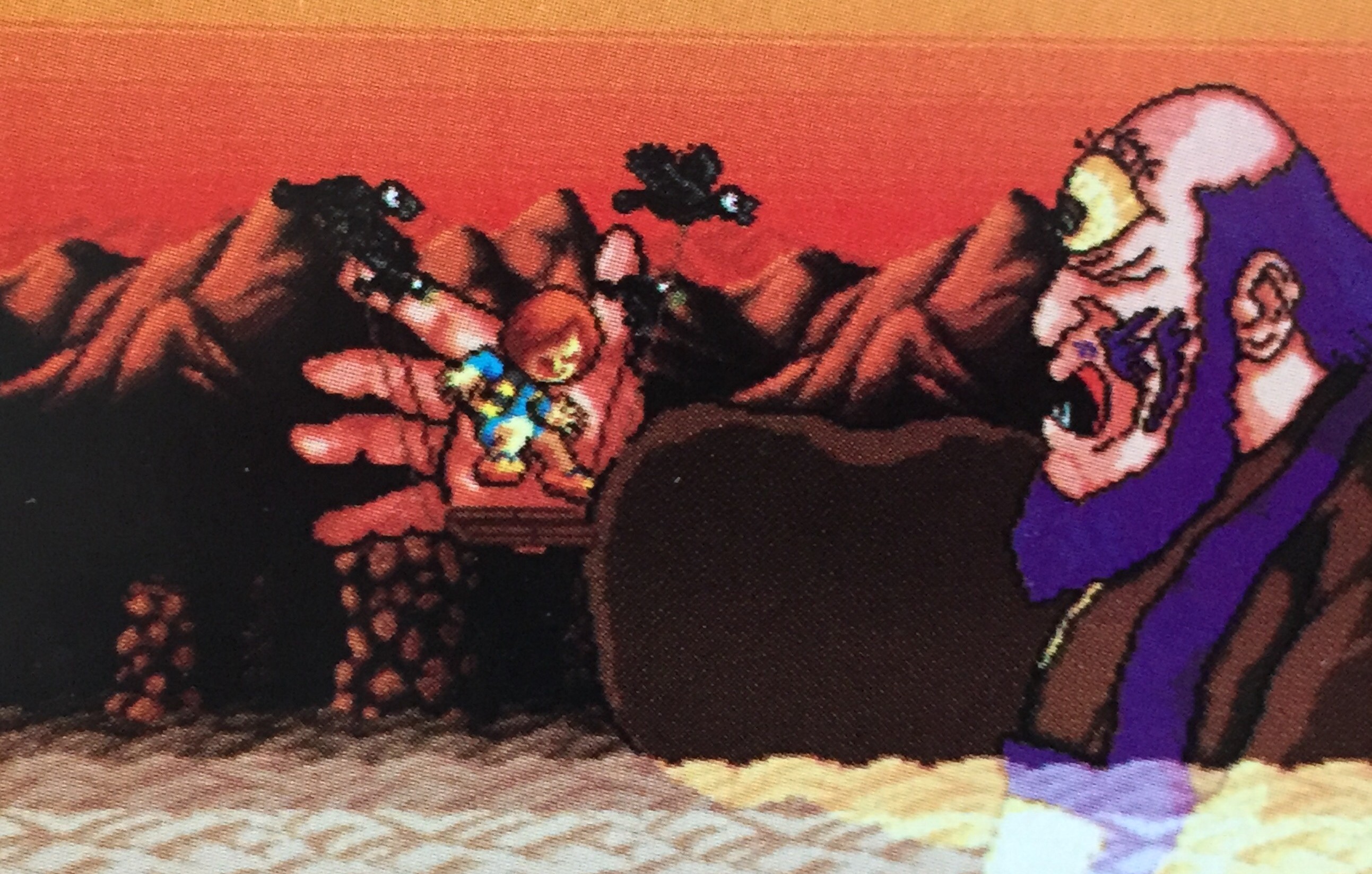 I lean more toward Super Play than GameFan when it comes to this game. I wanted to like GeGeGe no Kitarō a lot — it’s quirky, macabre and downright deliciously devilish. Perfect to play during the Halloween season. But the difficulty and the unnecessary cheapness of the game really hurts it. It’s much more tolerable and enjoyable, however, when playing with a buddy. You’re not missing much if you skip this one, but it’s a decent add to your horror gaming collection if you so desire. 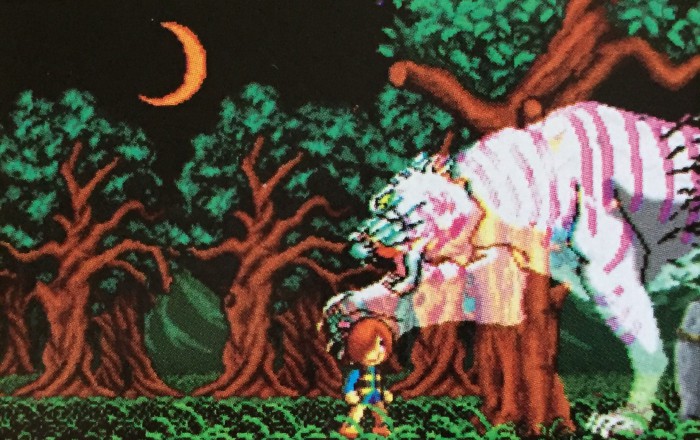