Although he lived a tragically short life, Bruce Lee did more in his 32 years than most folks do in an entire lifetime. The founder of Jeet Kune Do (established on July 9, 1969), Bruce Lee was a beloved martial artist and action movie star that left us far too early. Sure, we all love Jackie Chan, Jet Li and Donnie Yen, but there was NO ONE quite like Bruce Lee. Similar to Michael Jackson, he was an iconic figure who had an over abundance of rare talent and charisma that comes around only once . Recognized the world over by people of all ages, Bruce Lee’s legacy rages on today. A biographical film, Dragon: The Bruce Lee Story, was released 25 years ago based on the life and times of Bruce Lee. It was fairly well received by most critics. Two years later, Virgin Interactive made a video game based off that film. Let’s see if Virgin was able to do the man, the myth and the legend proud. 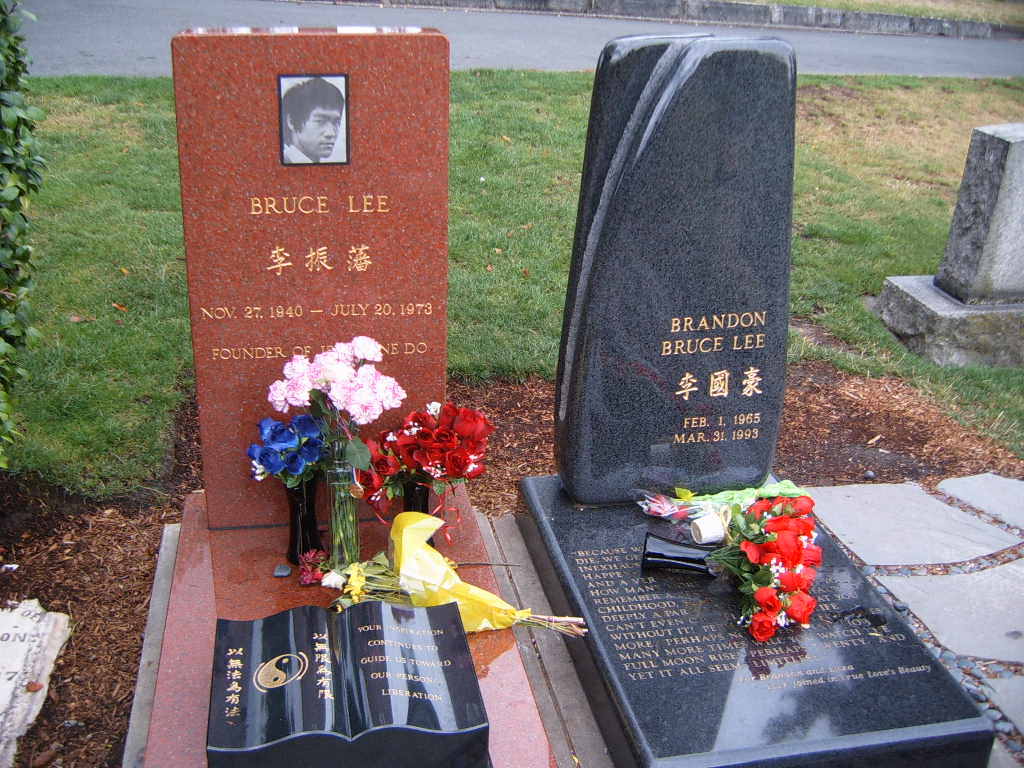 This past Spring Break, my girlfriend and I headed to Seattle, Washington. We stopped by Lake View Cemetery to pay our respects to Bruce Lee and his son, Brandon Lee. It was quite surreal standing here, especially seeing as how the 25th anniversary of Brandon Lee’s untimely passing was just two weeks ago. 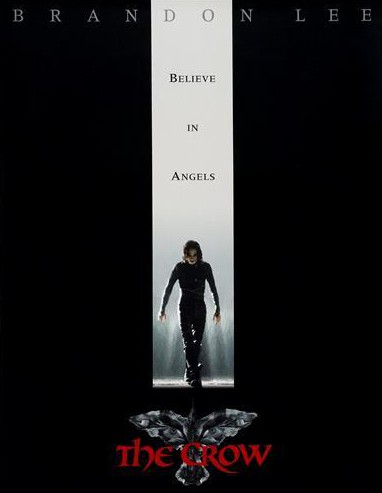 25 years ago, Brandon Lee died after an accidental shooting on the set of The Crow. Set to be his big break that would launch the 28 year old into movie stardom, it instead became Brandon Lee’s final and most memorable film.

The rumor and innuendo is that the Lee family suffered from a curse. Personally, I’m not one to believe in hexes and vexes but there’s no denying there is some eerie similarities surrounding the deaths of Bruce and Brandon Lee. Of course, as I write this, it’s Friday the 13th. Go figure.

A metaphorical (and perhaps literal if you’re so inclined to believe) phantom was said to stalk the Lee family, casting a shadow of darkness over their lives. This phantom was highlighted in the 1993 biopic, Dragon: The Bruce Lee Story. 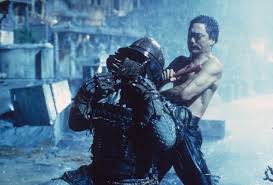 In the film’s closing moments, viewers watch as Lee dismantles the phantom demon that has haunted him throughout his life. The phantom attempts to hurt Bruce’s son, Brandon, before Bruce comes flying to the rescue. Considering all that happened with Bruce and Brandon, the phantom character carries eerie weight. Even if you don’t believe in that stuff, it’s still pretty creepy. 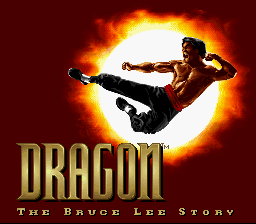 Dragon: The Bruce Lee Story was released on May 7, 1993, a little over a month following Brandon Lee’s death. It received mostly positive reviews. It’s hard to believe the film turns 25 years old in less than a month from now. 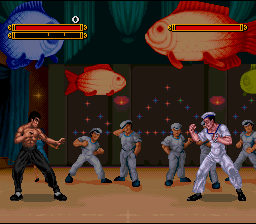 Watch your life meter but also keep an eye out on your Chi meter. After crossing the first marker you can activate Fighter Mode. You can’t block in this mode but your attacks are faster and more potent. Reach the second marker and you can activate Nunchaku Mode. 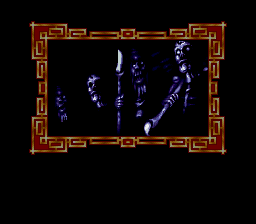 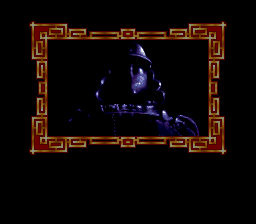 Dragon: The Bruce Lee Story opens up with this creepy cutscene. It plays into the whole curse thing and the metaphorical phantom that stalks Bruce Lee. 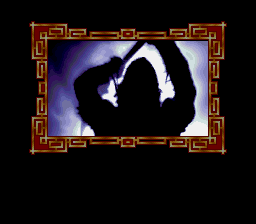 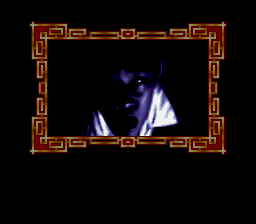 Nightmarish and ominous, things are off to a decent start. 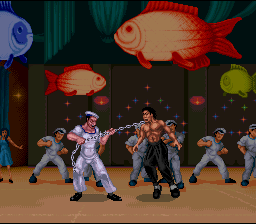 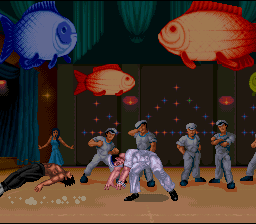 Nothing spells trouble quite like being at a Lantern Festival Dance with a less than savory sailor. So much for that decent start — Popeye is yanking your chain! 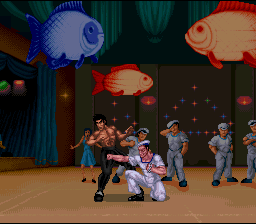 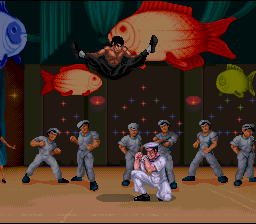 OUCH!!! But ever the thespian, Bruce lets everyone know he’s OK when he is seen doing a massive split kick only moments later. 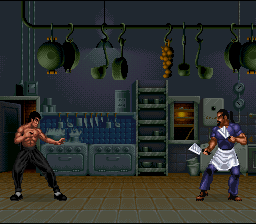 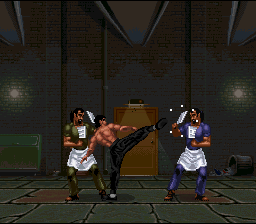 Gussie Yang’s Kitchen is full of scoundrels, but the toughest is the Chef. The fight starts out in the kitchen area before spilling out into the alleyway where he calls upon his twin for assistance. 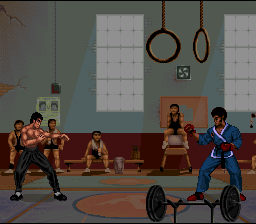 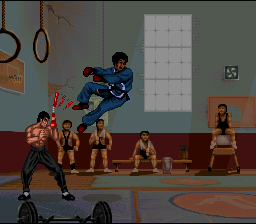 University Gymnasium of Seattle is where you’ll battle Scott. Show him who’s boss with the deadly nunchucks. 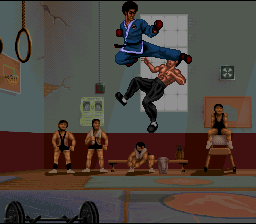 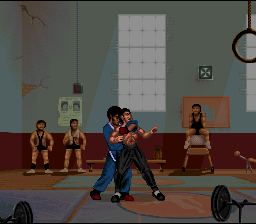 Beware Scott’s deadly jump kick and his novel variation of the Heimlich Maneuver. 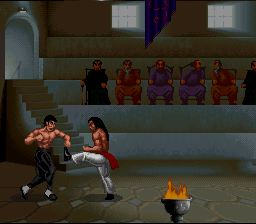 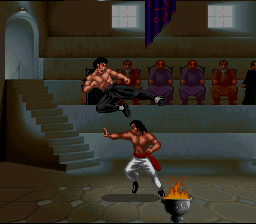 Johnny Sun greets you with malice at the George Wu Gymnasium in Oakland. 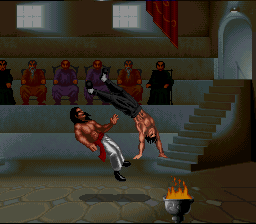 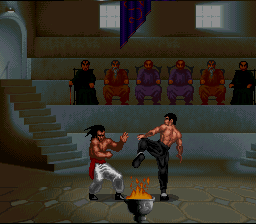 Sadly, it looks a lot better in still shots than it does in motion.

Encounter your worst nightmare, the Phantom Demon, in stage 10. He dies just like how he does in the movie. Nice. 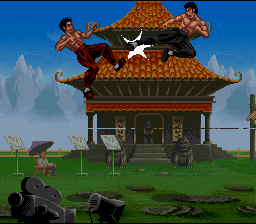 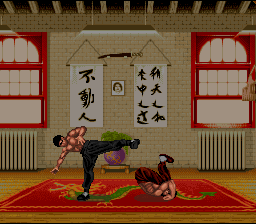 Outside the Story Mode, you can play the VS. mode. Unfortunately, you can only control Bruce Lee. None of the computer opponents are available. Not that it would have made a huge difference but still. 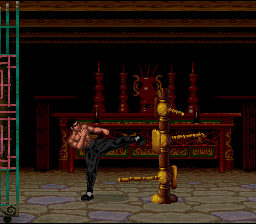 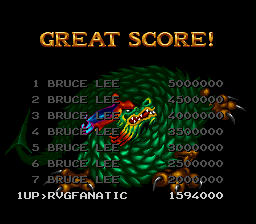 Tackle Pete the Dummy in the bonus round to acquire Chi and points. Can you make the Top 8 power rankings? 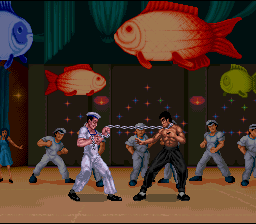 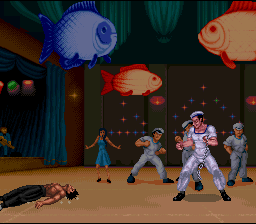 Dragon: The Bruce Lee Story came out two years after the film was released. In the summer of 1995, there wasn’t much demand for a Bruce Lee video game on the SNES. It was mostly panned by critics and arrived with very little fanfare, especially considering that it was a game based off the legendary Bruce Lee. But it came out two years too late to capitalize on the success of the biopic it was based upon. Both its ill-timed release and awkward clunky gameplay did it zero favors. It was doomed to fail from the start. Like a chain was tightly wrapped around its neck, dragging it down… 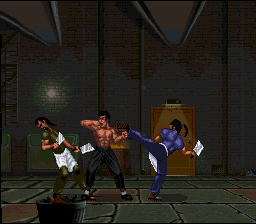 The most intriguing aspect of Dragon: The Bruce Lee Story, other than playing as the iconic Bruce Lee, is its 3-player mode. With a multitap and two friends in tow, three players can duke it out for martial arts supremacy. Sadly, the game is a bit clunky even when the game speed is set to Turbo. There’s a bit of a learning curve which I don’t mind, but the game never feels fluid no matter how much I try. Something about it feels off and it’s a very disappointing game, all things considered. The graphics are pretty bad — there are few frames of animation and background characters look like cutout cardboards. The sound doesn’t fare much better, as whacks and smacks sound unconvincing and lackluster. And why does Bruce Lee sound like a cat? It’s not entirely unplayable; it’s kind of fun to beat up on the computer with a friend by your side in the Two Player Story Mode, but this is no proper tribute. Bruce Lee deserves better and so do SNES fans. Avoid and pop in Enter the Dragon for the 10th time instead.